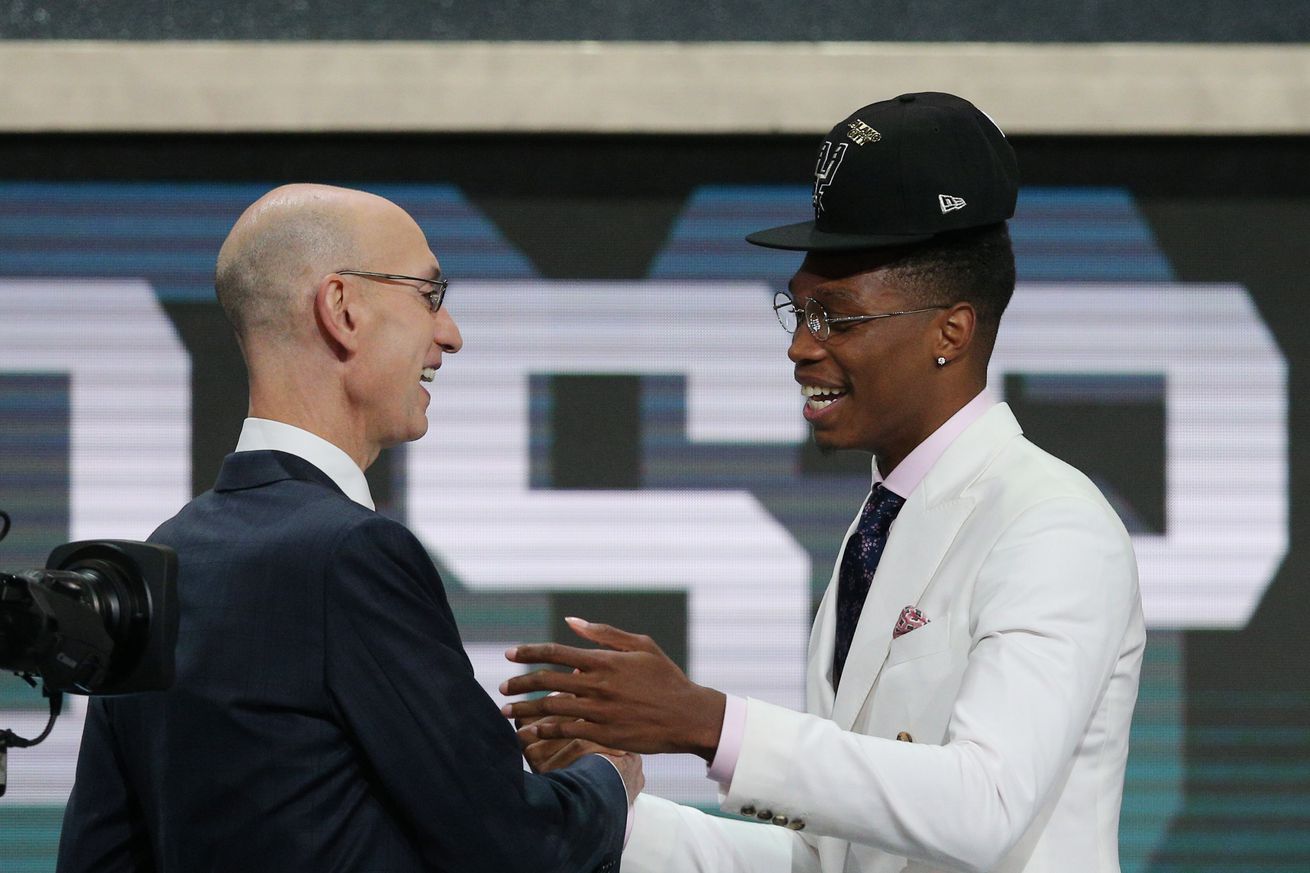 Thursday night passed with nary a whimper on the Kawhi Leonard rumor front. Instead the Spurs stood pat and let one of their draft targets fall to them at 18.

At the team’s practice facility, R.C. Buford addressed members of the media as the night drew to a close. After discussing at great length what the organization saw in the two players that had just been selected, the conversation ultimately, inevitably, turned to back to the Kawhi situation.

Where did things stand with the allegedly disgruntled star?

Buford responded: “Kawhi and his family mean a lot to our organization and our community. While none of us would wish we are where we are, we’re gonna do what we can to build the best relationship we can with him. We’ll explore all of our options, but the first one would be to do what we can to keep Kawhi as part of our group.”

Was there a timeline for when the team would like the situation to be resolved?

The response sent a nervous ripple of laughter through a crowd that had at least some idea of the missteps — admittedly on both sides, as Buford noted — that had brought player and team to where they were.

The Spurs did not move Kawhi Leonard on Thursday, as some predicted they might. There was barely a peep on rumored trade offers — only a tweet earlier in the day from ESPN’s Ramona Shelburne noting that San Antonio had “shut the door” on the Lakers’ attempts of negotiation. In addressing the media, Buford confirmed that the goal remained “to keep him as part of our program for a long time.” The saga, as it seems, may be far from over.

While the storm around Kawhi remained in a holding pattern, draft night allowed the organization to move forward in other ways. The Spurs didn’t expect Miami guard Lonnie Walker IV to fall to them at 18 (and had reportedly considered moving up to 11 in order to get him), and his addition means an injection of athleticism, shot creation, and two-way potential on the perimeter, all factors that are welcome for a team with or without Kawhi Leonard. They then nabbed raw USC big man Chimezie Metu with the 49th pick, mildly validating my West Coast Theory while taking a flyer on a guy with potential upside down the road.

Walker spoke via conference call with local media shortly after his selection. He expressed excitement in learning from the team’s veterans, praised Pop, and even deftly side-stepped his first Kawhi question. Here’s him speaking about his expectations for settling with the Spurs:

“This is one of the best fits for me, just because how great of a Coach Popovich is. He’s coached one of the best; he builds dynasties; to have a rookie year around him and learn and continue to develop as a person — it’s definitely the best place to be the best person I can be.”

The irony in Walker talking about fit, of course, begins with the visual of the 6’4’’ guard taking the stage, his draft cap humorously, hopelessly propped atop his vertigo-inducing hairdo.

“I know the team is gonna get on me about [my hair],” Walker joked over the call.

The do only scratches the surface of the kind of unique, unabashed personality headed to San Antonio. Walker’s wide-ranging intellectual interests and ideas have been the focus of various pre-draft interviews, and they, in the least, paint a clear picture of an athlete that thinks beyond basketball. Here’s an excerpt from The Ringer’s feature on him:

[Miami coach] Jim Larrañaga was fascinated by the jaguar. Not the car—the animal. So when it was time for his weekly phone call with Walker during the recruiting period from July to August 2015, the Miami basketball head coach made sure to ask him about it:

Walker didn’t miss a beat. “Oh, yeah, I’ve watched that, that’s great,” he said back to Larrañaga. “Ostriches are fast, and they’re big, and if they kick you, they can really kill you or hurt you.”

This is how most of their conversations went before Walker ever arrived at Coral Gables. Both parties understood the terms of engagement: They needed each other for basketball reasons. But basketball became the least important parts of their chats. Larrañaga appreciated how Walker made him think. “It’s very healthy. One of the things we stress is balance. You want to have balance in your life. [Lonnie] is a very well-rounded person. A lot of guys, all they want to talk about is basketball. But him, he’s got quite a diverse personality and interests.”

Like his interests off the floor, Walker’s passion for the game and goals as an NBA player also know no bounds. He’s quick to express a desire for greatness — “I’m addicted to being the best. I’m obsessed with being the next great,” he said after being drafted — but not without also stressing his willingness to work hard, learn, and contribute to the team however he’s asked.

“I just had so much blood, sweat and tears into this game,” he said. “You see your mom. You see that beautiful smile after such great accomplishments. It’s amazing. People don’t understand where I come from. I talked to my mom earlier today. We don’t have to worry about sharing a cheeseburger for dinner. We don’t have to worry about sharing some Doritos for breakfast. Things of that nature. I got her back. Same way she got my back for the past 19 years.”

On Thursday, Buford raved about Walker, not only in what the team saw in him as a player — “This is really an exciting day for us. Lonnie Walker is one of the best athletes in our draft. We had him ranked significantly higher.” — but what he brings as a person. The intangibles, as you’re likely aware, carry great weight to the Spurs organization, and that was clear in Buford’s praise of Walker. He noted a letter the then-college-freshman wrote to his hometown high school (which you can read here), the leadership responsibilities he took on in his sole season at Miami, and how he might fit alongside other young guys like Murray, Derrick White and Kyle Anderson.

“This is a kid who came up in a difficult background, and the maturity and the commitment that he’s made, not only to himself but the community of Reading, he’s become a real positive role model for young kids in a community that has a difficult circumstances. He really takes pride and importance in providing inspiration to his community.”

By selecting Walker, the Spurs added a guy they wanted. By not moving Leonard, they held onto The Guy for at least a while longer. The team’s future remains nebulous, but fans should be at least a little more optimistic as a pivotal offseason gets underway.