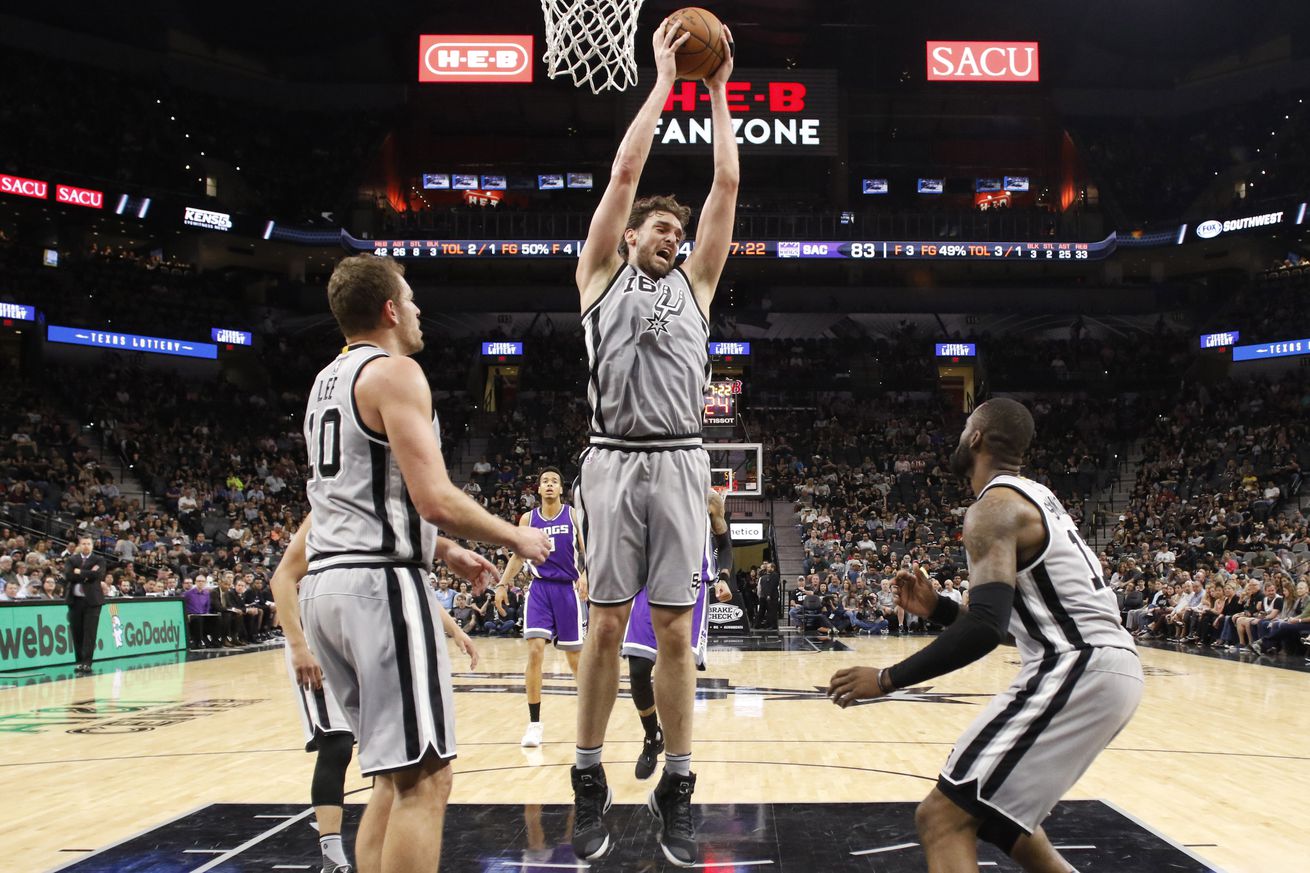 A total team effort shows how the Spurs can have fun and win big.

Without a doubt, the Spurs play their best when the entire team is involved. When the isolation plays are few and far between and the ball movement is prevails, the good to great is still the best. As Pau Gasol said, “It was just a matter of us turning it on and being a little more aggressive defensively and playing with more flow.” Pointing out…”late in the first quarter, we found it. Ball movement is always the key because once we do that, it creates a certain energy out there and helps us get everybody involved. When you’re open and get the ball, it’s a totally different game.” So lets take a look at some of the best sequences that yielded that type of play.

#1 Kawhi Leonard comes around a Danny Green screen and passes to Patty Mills who dives into the lane before shoveling the ball to an open LaMarcus Aldridge. Notice how Mills takes advantage of his man closing out on him to prevent a three, and how Aldridge takes a few steps back before receiving the ball so that his man has farther to recover after defending Patty’s drive.

#2 Patty gets the rebound and quickly passes up court to Jonathan Simmons who after one dribble, passes to Kawhi who palms the ball to hold it away from the defender’s swipe before elevating for the dunk.

#3 This one of many extra effort plays. As the Kings attempt a inbound, watch Patty’s head turned sideways with his eyes on the in-bounder as well as the man he is guarding. With great anticipation, Patty steals the inbound and passes to a open David Lee who dribbles in drawing the defenders. David then passes back to Patty for the open three.

#4 As Pau hands off to Danny, he rolls and passes to David who passes to Kawhi in the corner. With a defensive man charging at him, Kawhi passes to Patty for a wide open three. The shot comes up short but Danny is there for the put back tap in. Total team ball.

#5 Tony brings the ball up and drives deep. As the defenders are drawn in, Tony passes out to a wide open LaMarcus, who takes and makes the three.

#6 Once again we see Tony as he drives deep and curls around the defenders allowing Dawayne Dedmon room to move and ready himself for a pass. A perfect pass by Tony to a wide open Dedmon results in a dunk.

#7 What starts out as a typical pick & roll with Patty and Pau ends with Pau exhibiting a totally committed individual effort. As you can see, at this in the game the Spurs were up by 25 and the game was well under control. As you watch this play over and over, watch Pau’s determination and ask yourself, why was he trying so hard. He is a true professional soon to be in the Hall of Fame. How wonderful is that attitude?

At the post game presser, Coach Popovich had this to say…”We came back after a couple of losses pretty well and did a good job tonight…We didn’t turn it over. We moved the ball well. We were really aggressive on both ends of the court.”