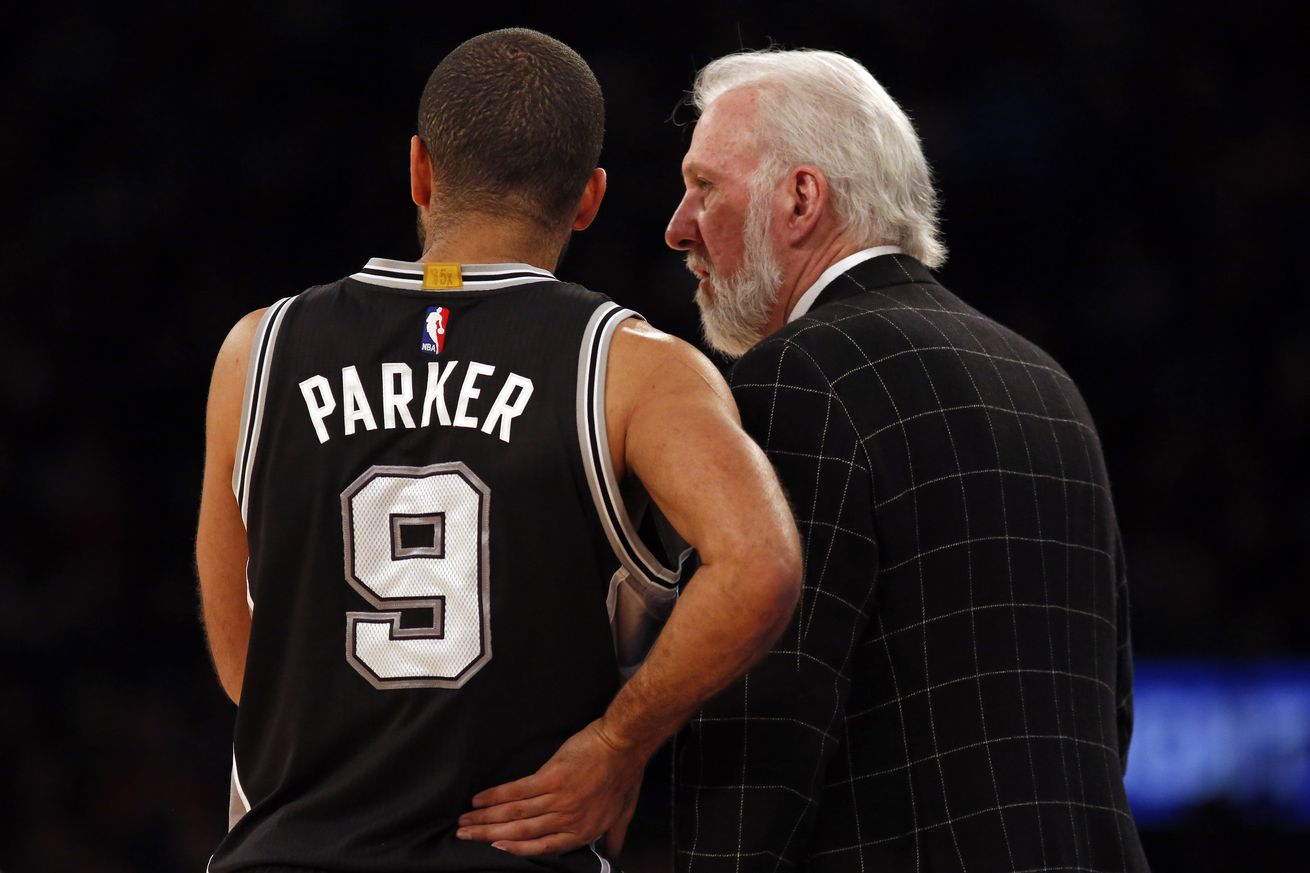 PtR’s staff discusses the NBA’s trades that happened and the ones that didn’t and the repercussions.

1 – The Spurs didn’t make any moves before the deadline. Was that wise or was an upgrade in their rotation needed?

Michael Erler: Every team that fancies themselves as contenders should look to improve and every team that doesn’t should look to maximize their draft situation. The best way for the Spurs to improve would have been to upgrade their point guard, in my opinion, but that’s not realistic at all because Tony Parker is a part of the team’s fabric and culture and he’ll never be traded. It’s fair to suggest that Manu Ginobili’s production isn’t worth his current salary either, but he’s also not going anywhere.

It’s tough to suggest that the Spurs should have package “assets” because I don’t think they really have any. Patty Mills‘ contract is up, as is Jonathon Simmons‘. I don’t think Kyle Anderson has too much value. Their draft picks are always at the bottom of the draft. What was really left for them to move that they would have been comfortable losing? If an addition is coming, is coming from the buyout market.

Jesus Gomez: It’s always hard to discuss the Spurs and trades, because they value continuity so much. I definitely think they should have gone for an upgrade at the wing if one was available. Jonathon Simmons and Kyle Anderson can’t shoot and Manu Ginobili needs his playing time reduced in order to be productive. Two point guard lineups serve as a stopgap in the regular season, but could be exposed in the playoffs. If a first round pick and either Slowmo or The Juice (I’m still ambivalent about that nickname, by the way) were enough to net San Antonio a more well-rounded wing like Will Barton or Robert Covington, I would have been all for it.

Alas, adding a major rotation piece this late in the season when the team is doing as well as the Spurs have done so far was never in the cards. I would have welcomed an upgrade but understand why one is not likely to come.

Chris Itz: For the reasons that Erler and Gomez pointed out I wasn’t expecting the Spurs to make any moves. It was just hard to imagine them going forth with a trade. Maybe next year.

Bruno Passos: Whether they should have or not obviously depends on what they could have gotten in return, and the issue is the Spurs weren’t exactly brimming with expendable, attractive assets. I think it’s absolutely fine to stand pat, given the lack of opportunities out there and the fact that they’re doing better than a lot of people thought they would be heading into the season. Instead of a shakeup of the roster, I’m not opposed to Dejounte Murray soaking up some more minutes, especially as the second seed starts looking like more of a foregone conclusion.

2 – Can the Pelicans get the eighth seed and give the Warriors some trouble now that they have Cousins or are we still heading for a sweep?

Erler: They’re three games behind the Nuggets in the loss column and they’ve got the Blazers (and the Kings) ahead of them in the standings too. I don’t think it’s at all a given that they’ll make up that kind of ground with just 25 games remaining, especially when you consider that it’s unlikely that Cousins will be available for all of the games. Remember, he’s bringing all those technicals with him to New Orleans. It’s not like those reset just because he got traded. He’s still going to be suspended for a game for every two technicals he gets going forward. Also, the Pelicans had to deal away their top two three-point shooters –such as they were– in Buddy Hield and Langston Galloway to make this deal work.

I think in theory they could give the Warriors some problems offensively in a playoff series, but they’d be hopeless against them on defense and would be fortunate to even take them to five games. The 1999 Spurs didn’t exactly surround Duncan and Robinson with much shooting either, but that team was considerably better defensively and it was a different league then, with a talent drain in both conferences. They’ll be an interesting team to watch in the off-season, to see what moves they can make to surround their newfound twin towers, but I’m not expecting Alvin Gentry to work miracles right away. It will take time to figure out how to get those guys to play well off each other, especially defensively.

Gomez: The Pelicans should be able to grab a couple of shooters to round out their rotation and the Cousins-Davis frontcourt is going to out-talent weak opponents. Catching up with the Nuggets now that they’ve realized they should run their offense through Jokic is not going to be as easy as many predict, but I think they will ultimately get the last playoff spot. At least I hope they do, because a Pelicans vs. Warriors series would give the Spurs a chance to see whether it’s actually possible to stay big against Golden State. If New Orleans manages to do that, they can steal a game and give San Antonio a blueprint. If it can’t despite having such a dominant big man tandem, then Aldridge and Gasol have no shot and it would be time to tweak the game plan accordingly.

Itz: The good news for the Pelicans in the race for eighth is that they have three games left against the Nuggets and two against the Trail Blazers. Their schedule outside of that is tough, though — 12 of their final 25 games are against playoff teams. As much as I’d like for it to be different, I think the best case scenario for the Pels is a five-game series against the Warriors (just for fun, Vegas is currently giving the Warriors about a 65% chance of winning the title). It’s also not too hard to see New Orleans finishing a game out of the playoffs.

Passos: I hope so, but it’s going to be tough. It’ll take some time for Alvin Gentry to make the most of Boogie and Brow together. Meanwhile the Nuggets seem to be figuring things out and have that three-game head start in the loss column. I think they have a much better chance of pushing Golden State than Denver does, but ultimately the Warriors are too dynamic for me to flirt with the idea of a first-round upset.

3 – Other than the Kings, who’s the biggest loser of this trade season?

Erler: I’ll take Boston. I think Danny Ainge is afraid of success. He’s got a team of veterans who are ready to win now. All they need is one superduperstar to give them a realistic chance of being competitive with Cleveland. They already drafted Jaylen Brown third overall this past draft. Now they’re going to grab another 19-year-old in the next draft and then wait four, five years for him to peak? The odds of whomever they draft in June ever being as good as Paul George or Jimmy Butler are what, 50/50? So why wait on that when you can have it now, with guys like Thomas and Horford are ready to win? Granted, we don’t know exactly what the Bulls or Pacers wanted in addition to that Brooklyn pick, but as long as they didn’t want too many other pieces, the Celtics should’ve done something. Both George and Butler are top-12 players and you don’t turn that down if you’re serious about winning. Houston’s Daryl Morey would’ve made those trades all day if he had such assets. Very disappointing.

Gomez: I have no idea what the Bulls are doing. Their offseason was bizarre enough, but their moves at the deadline are similarly weird. They reportedly turned down a Celtics offer that included both Nets picks for Jimmy Butler because they wanted veterans. Then they moved Taj Gibson, Doug McDermott and a second round pick for Anthony Morrow, Joffrey Lauvergne and Cameron Payne, from OKC. That’s pretty much a lateral move that includes only one piece with serious upside in Payne. Too bad he’s a dreadful shooter who can’t play off the ball to accommodate Butler.

Chicago had two options: add pieces that fit Butler or move him and reload. They instead decided to shuffle the deck chairs. They seem destined for a long stint in the treadmill of mediocrity.

Passos: I’ll double down on Boston, who stood pat while the Raptors improved and the Wizards picked up another piece, clutching a 2017 draft pick that should probably be used on a point guard, a position they have no need for. Al Horford is on the wrong side of 30 and 28-year-old Isaiah Thomas is having a career year — this was the time to cash in on the smart moves they’d made in the past and aim high at someone like Jimmy Butler or Paul George. Instead, they’ll probably be adding a young guy who can’t make them better until Thomas, Horford and Bradley are past their primes. Given the potential upside they were looking at, that seems like the costliest of all moves/non-moves this year.