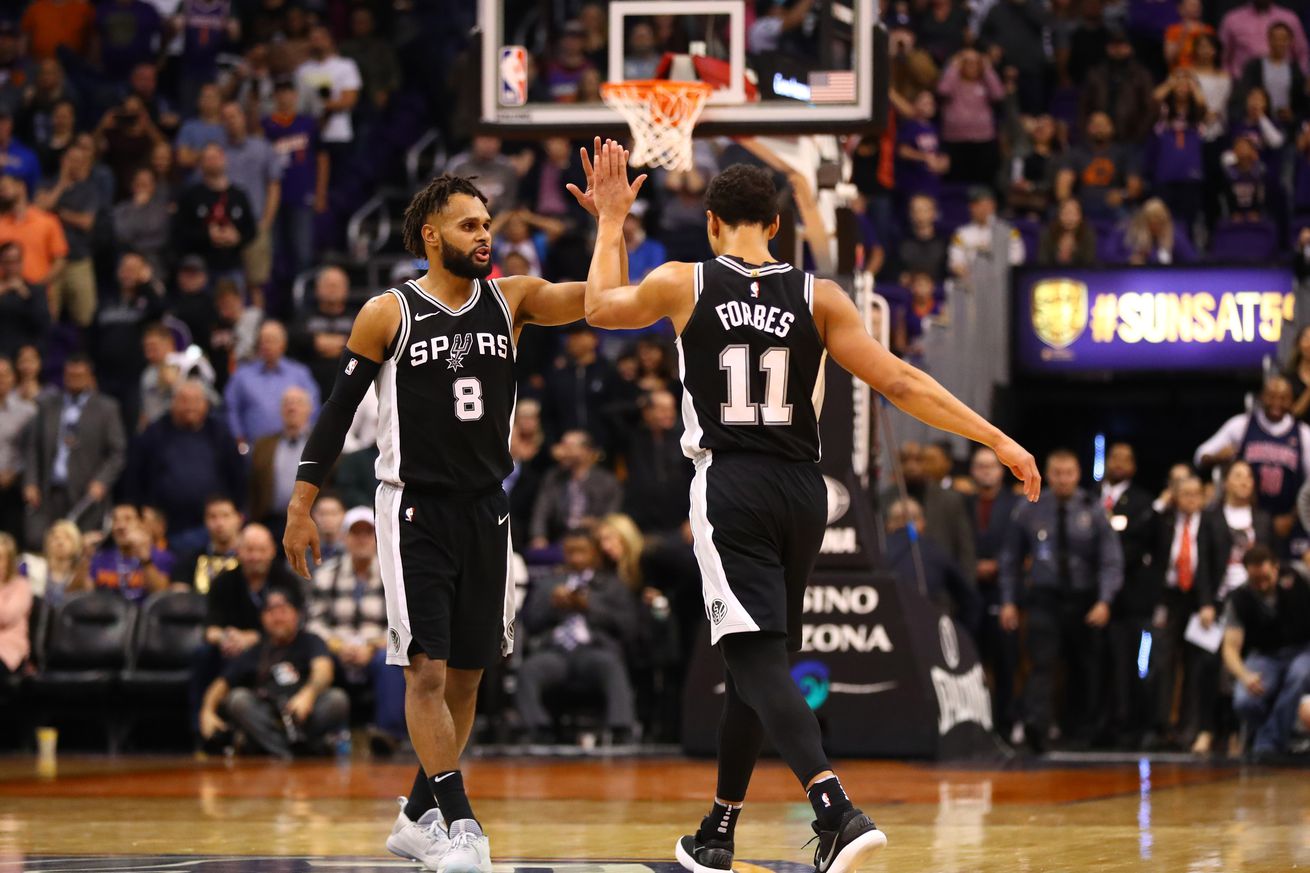 Saturday night’s game between the Spurs and the Suns was rumored to be the triumphant return of the best two way player in the game. Instead, what we got was a depleted Spurs team in a dog fight on the road. With over half of the roster in blazers on the bench, LaMarcus Aldridge and Patty Mills had to carry the load on offense. Fortunately for the Silver and Black, the two playmakers did not disappoint as the Spurs held off a late Suns rally and came away with their fourth straight victory. Here are some takeaways from a bizarre road victory.

Aldridge may not have complrtrly dominated like he often had this year, but it’s hard to fault much with the big man’s performance as he poured in 20 points and 9 boards. He struggled a bit from the perimeter, but his ability to command a double team has kept the offense afloat through the first third of the season. With Kawhi’s return on the horizon, it will be interesting to see how the former Longhorn’s game evolves.

Once Dejounte Murray can rein in his turnovers and hit jumpers consistently from 17 feet, the 21 year old guard is going to be a special player. He is already so far ahead of the curve athletically that it is a thrill watching him take the court. The growing pains are still there, as are the head scratching turnovers, but so is the potential. There’s no call lose patience with Dejounte.

Rudy Gay appears to be transitioning nicely into his new role. The volume scoring forward has been able to pick his spots offensively and play off of LaMarcus Aldridge instead of forcing the issue. His ability to play the 4 has also been a major benefit to the team, as he has held up defensively and has been able to take advantage of matchups with less agile defenders.

Davis Bertans had a decent night. His athleticism has helped the second year forward make up for his lack of size in the post, and his shooting ability and effort will always put him into a position to succeed on the floor.

Patty Mills did all the Patty Mills things. The Australian gunner came out Saturday night looking to score and dropped 20. When Patty is that effective, this team is incredibly difficult to beat. His range and quick release make him a threat from anywhere on the floor.

Brandon Paul and Bryn Forbes preformed nicely in their taste of extended minutes. They both struggled a bit from deep, however their effort defensively and their ability to persevere when their shots aren’t falling has got to be intriguing to the coaching staff. The two guards have lots of room to develop, and it does not hurt to have two capable guys like this at Coach Popovich’s disposal.