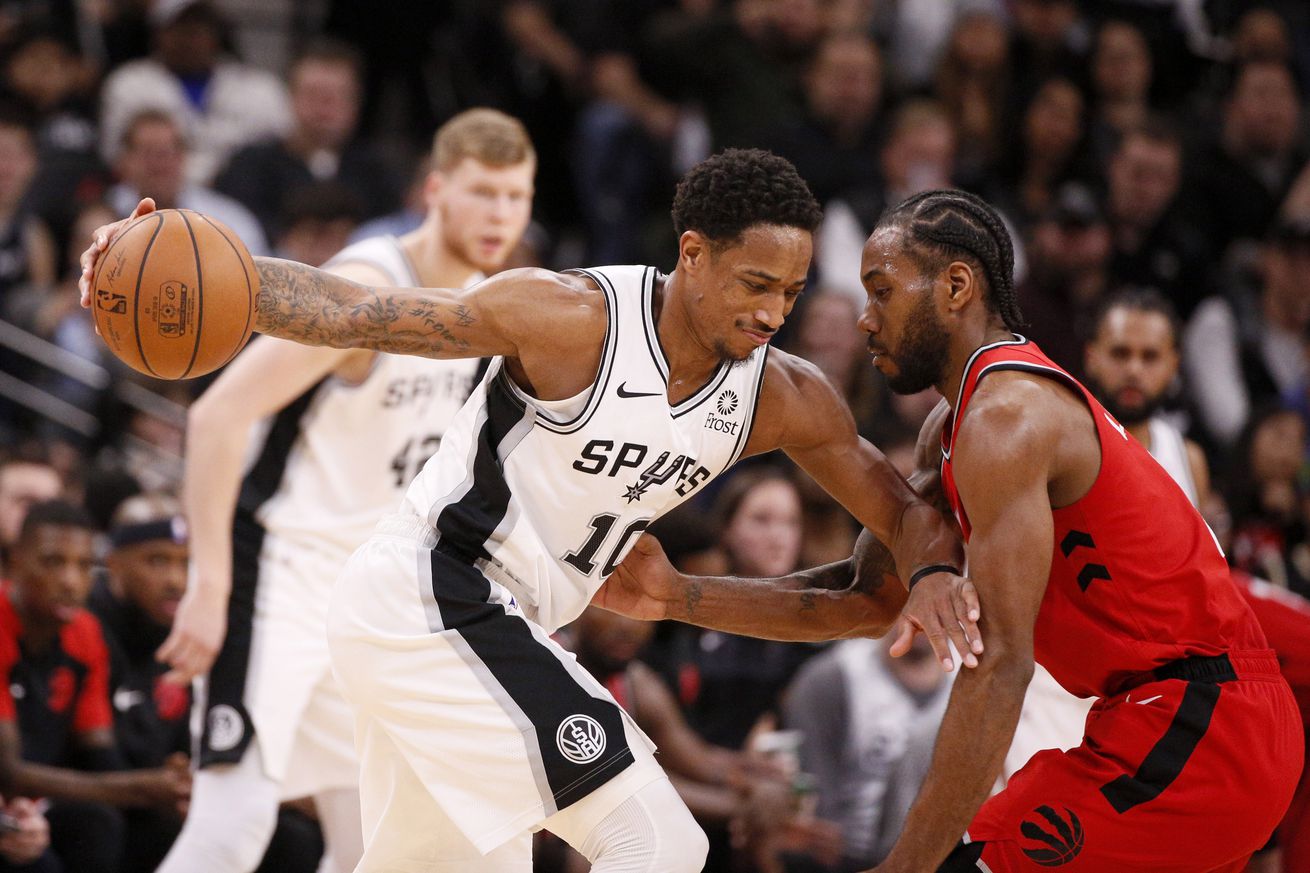 That hug at the end almost broke me. After an emotional night of cathartic booing and more than a little schadenfreude, the camera zoomed in on Kawhi Leonard walking over to the Spurs bench and hugging Gregg Popovich. He even smiled a little. I couldn’t totally process my feelings about it in real time. It was all too much.

Nothing but respect between Kawhi and Pop pic.twitter.com/0p1EW2DScx

This whole game sure was a lot, wasn’t it? Did we like it? Did it feel good? It did in the moment. I was fully Team Don’t Boo heading into the game but there was never a realistic version of Thursday night where Kawhi received anything but a shower of vitriol from the Spurs crowd the minute he stepped into the building and, I’ll admit that it was very easy to get swept up in it all. It was fun even.

Turns out there’s real value in being able to yell “You hurt our feelings!” over and over…without any words. I think I underestimated that. Throughout that whole arduous process last season, probably the most frustrating part about the whole thing was how powerless we all felt. We weren’t in the room and we weren’t a part of any discussions. The Spurs front office may have been in the dark about what was going on with Kawhi, but you can go ahead and double that darkness for the fans. We had no say in what was going on. We had no voice.

That’s what Thursday night’s game was about. The fans finally got to say their piece. That piece, as it happens, went a little something like, “We are very upset that you left the way that you did, sir! Very upset indeed!” This is all probably healthy, I’m sure. An end stage step in the process of moving on with our lives.

That hug at the end of the game though. I think that’s what I actually wanted. The booing felt good as it was happening, but it also felt a little bit like empty calories. I smiled and laughed as the crowd struck up the “traitor” chant in the 2nd quarter. I enjoyed it. Watching it back later, I was a little embarrassed with myself though. I wanted to be above it all. I wanted to be like Pop was in that moment after the game. Gracious. Forgiving. Understanding, even. Maybe it’s easier to feel that way right after you’ve just coached circles around your opponent en route to thoroughly demolishing them on national television. Maybe Pop’s just lived enough life at this point to know that hate like that isn’t ever going to be the answer.

In the midst of the emotional hurricane taking place, there was also a basketball game being played out there. A pretty good one too, depending on who you were rooting for. The Spurs continued to prove their mettle in a high profile game. They are, without a single doubt, one of the best teams in the league right now. They are firing on all cylinders and look like they are getting better by the game.

I regret that I spent so much of this matchup thinking about Kawhi. I regret that the beginning of this post was mostly about Kawhi. I’m tired of defining our season by what we are doing in his absence. The Spurs went out there Thursday night in front of a national audience and threw their hat in the ring as a real contender. Not just in the future, but right now. DeMar is ready to go. LaMarcus is ready to go. Rudy, and Bryn, and Derrick are all ready to go.

The future might be bright in San Antonio, but the present doesn’t look too shabby.