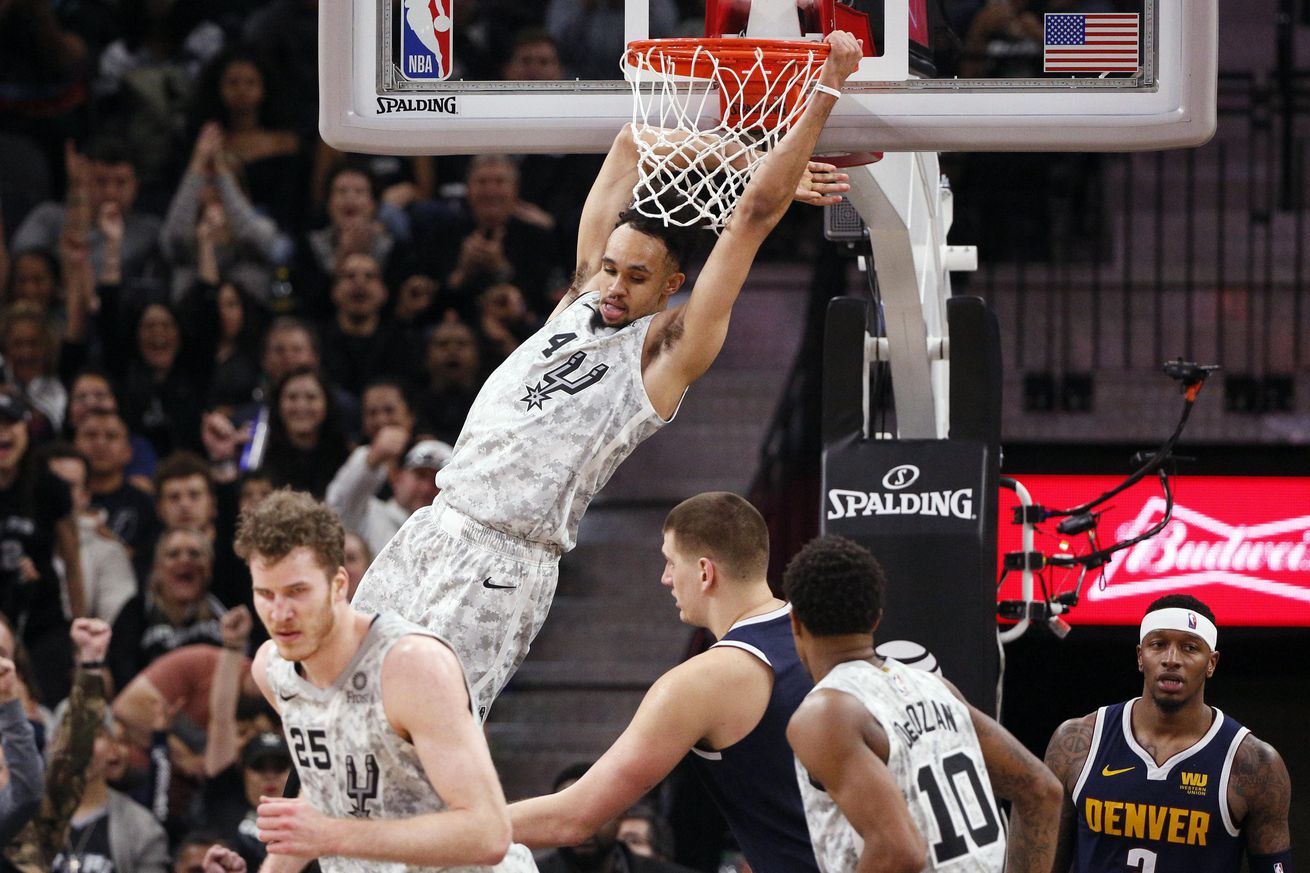 The Spurs deliver a Boxing Day miracle, using a stellar 4th quarter performance to finish off the 1st place Nuggets.

A friend of mine went to the game Wednesday night and, when I met up with her afterwards, I asked her how it was. She shrugged her shoulders and said, “well, they were good, and then they were bad, and then they were really good again.” If you want to save yourself a few minutes and skip the rest of this then I’ll totally understand because I don’t think I can sum it up much better than that.

Against the Nuggets on Wednesday, the Spurs showed electric flashes of the tantalizing team they’ve been recently. You know the one. They looked like a team that moves the ball around the court at high speed and attacks their opponents on defense in a sort of unrelenting swarm. They looked fast, they looked smart, and they looked dangerous. They opened the game locked in and they finished things off with one of the best stretches of play we’ve seen from them all year. When the Spurs play like this, it feels like they could beat anyone in the league.

Also against the Nuggets on Wednesday, the Spurs showed a few dispiriting dips in form here and there, almost as if to remind us not to get too far ahead of ourselves. For all the good we’ve seen out of the Spurs in the month of December, they are still a flawed group that’s learning how to play together. They have lapses in concentration and focus. They have moments where the look outmatched and flummoxed by certain lineups. The offense can be humming right along and then stall out just as quickly. You can see the coaching staff preaching consistency with their players, and you can tell that the guys on the court crave it just as much as we do watching at home. But consistency isn’t something that happens over night. The Spurs are going to have to earn it, and we’re probably going to have sweat out some nervy moments along the way with them, and that’s okay.

This is fun right now. We’re watching a group of guys start to realize just how good they can be. We’re seeing guys like Bryn Forbes gaining the confidence to hit a step back three and then rapturously howl along with the fans after the other team is forced to call timeout. We’re seeing Jakob Poeltl realize that he’s super athletic and can just catch a ball on the break and fly up for a two handed slam. We’re seeing Derrick White stealing the ball from whoever he wants and running the break like a seasoned vet.

For the longest time, Spurs fans have been blessed with a core group that really knew itself. Tim and Manu and Tony, along with Gregg Popovich and his staff, were as close to a basketball metronome as you could get. Year-in and year-out, they took the floor and knew what they needed to do to win. Guys came into the system and fell in line. It was great and it led to a lot of victories. It was also a little boring at times.

What we have now is new and different. This is a team that’s learning, that’s finding out who it is. That’s sort of invigorating, isn’t it? Look at the standings. Eight games separate 1st place and 14th. There’s no need to worry about making the playoffs really because the truth is that we’re already in them. Every single game we play is important right now, and it’s probably going to stay that way the rest of the season. The AT&T Center came alive during that 4th quarter run Wednesday night in a way that it hasn’t for a regular season game in quite a while. I loved the Old Spurs because they rendered the regular season almost an afterthought with their ruthless efficiency. I might love these New Spurs because they are making the regular season fun again.

The Spurs are really good.