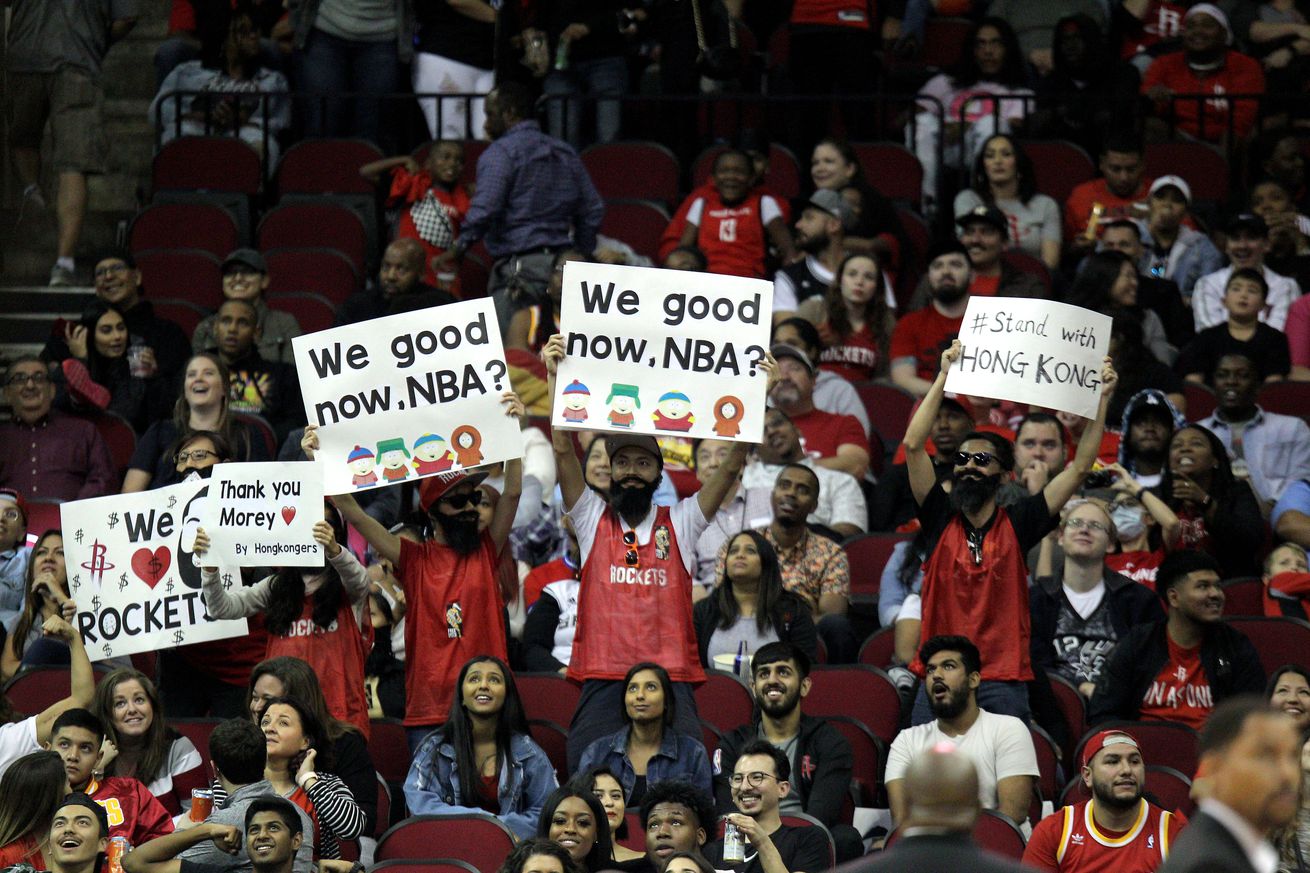 It feels like a black cloud has enveloped the early days of this NBA season. About two weeks ago, the Rockets General Manager, Daryl Morey, managed to incite an international incident via his Twitter account that has unexpectedly forced both the league and it’s fans to reckon with all the sweaty little intricacies that make up this league’s place in the global market. Instead of breathless anticipation for what should be one of the most competitive years in recent history, we find ourselves a bit preoccupied with, well, just about everything else.

The looming specter of both business and politics is one of those things that has always hovered around the background of everything that goes on in the NBA, but it’s also been something that we’ve largely been able to engage with at our own pace. We all want sports to be a safe haven from the real world. You can’t always yell at your boss after a tough day at work, but you can always yell at Marco Belinelli for missing a defensive rotation. I get that, I really do. The basketball is almost always better when it hangs out in a little bubble that we get to go inside and visit to simply get away from it all. The bubble can still be there if you want it to, absolutely it can, but it’s getting harder and harder to ignore that it’s violently bouncing around inside the same raging tempest that seems to be swallowing up everything else these days.

I was struck by this watching the Rockets local broadcast of this game. It was truly bizarre to watch their announcers, Bill Worrell and Craig Ackerman, casually discuss the team’s return trip from Japan as if the entire franchise hadn’t been ground zero of a geopolitical crisis for the last ten days. The Rockets came out in this game looking flat, tired, and relatively disinterested, even by the meager standards of preseason basketball, and the announcers were buoyantly tossing out lines like, “Well Craig, you have to imagine they’re a little jet lagged tonight.” You think?

Look, I honestly don’t blame them. What do I want these guys to do: hash out the franchise’s long history with the Chinese market and how this sudden upheaval in that relationship might affect the team’s financial ability to compete in the future, all while pretending some ill-advised three Russell Westbrook just took was actually a good shot? No. That’s not good and that’s not even what I want. I don’t know what I want. All I know is that these games have felt weird so far. Not bad, just weird. It’s like we’re all hanging out and trying to enjoy Thanksgiving dinner on pins and needles because we aren’t quite sure what cousin Greg might say next.

Maybe once the games start counting things will be different. The news cycle certainly moves at such a blistering pace these days that we might not even remember this story was a thing by the time Christmas rolls around. It’s hard to say. But the NBA has always prided itself on being about more than basketball. It wants to be involved in our lives and our communities. It wants to ingratiate itself with us by having its players dress up like pirates in silly local commercials, and it wants us to be talking about the league with our friends and families and getting into playful arguments about who should make the All-NBA 3rd team defense or whatever.

The NBA doesn’t want to be a bubble. It’s want to be a marketplace of ideas that brings the world together through sport. These past couple of weeks have been a harsh reminder that there is a flip side to that equation. The more the league continues to weave itself into the fabric of our lives, the harder it is to separate it out when things start to get real.