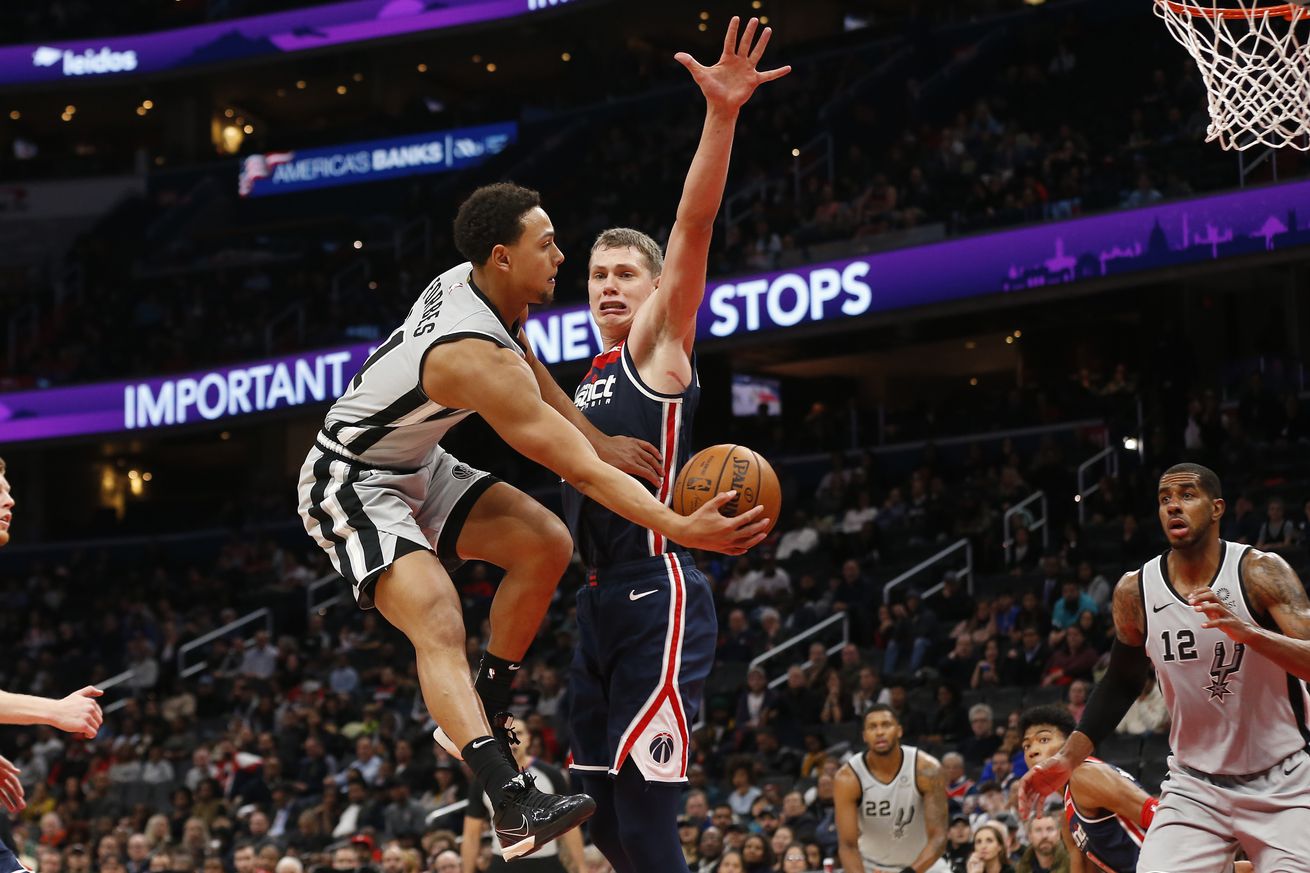 A familiar result, but with an undercurrent of change.

The San Antonio Spurs extended their losing streak to seven last night, once again drawing it out to the last seconds before finally succumbing to a Wizards team that seemingly couldn’t miss. On this occasion however it wasn’t the Spurs offense that failed them so much as their defense.

Despite Gregg Popovich doubling down on an shooting heavy starting unit with the substitution of Patty Mills for Dejounte Murray, the Silver and Black just couldn’t overcome the lack of one of their two quality perimeter defenders in Derrick White, as Bradley Beal, Isiah Thomas, and even Ish Smith took advantage of an alternately leaky and lopsided back-court.

Certainly, there were other offenders, as Pop’s refusal to give the lion’s share of Marco Belinelli’s minutes over to some combination of DeMarre Carroll, Lonnie Walker IV (and perhaps even last minute addition Keldon Johnson), continued to wreak havoc on an ailing defense that needs all the help it can get. But by the end of the second quarter (a half in which San Antonio scored an astounding sixty-nine points), it had become clear that the team had entered the game with one arm tied behind their backs, and that a potential win was hanging by the most fragile of threads.

The Spurs were going to need either a) Continue to outscore the Wizards, or b) Conjure a series much needed series of defensive stops. And after San Antonio’s recent series of fourth quarter woes, it wasn’t much of a surprise that the final score reflected the results of neither of the aforementioned possible solutions. While the Spurs have certainly been the victims of their own lackluster play, there’s an argument to be had that they’ve also frequently lacked the benefit of good fortune, particularly where the endgame has been concerned. In that respect, it was more of the same, as DeMar DeRozan bricked both of his final free throws (having made the last thirteen in a row) to finally seal San Antonio’s fate in the final seconds that they had communally fought so hard not to lose.

In some ways this felt like the worst loss of the season, with the good guys giving a high level of effort for the entirety of all four frames. Certainly, it seemed a bit crushing for the personnel on the losing end with a large number of shoulders collectively slumping as they all but fled the court, but there were actually a lot of positives to be found.

All but lost in the extension of San Antonio’s most dubious losing streak in the last twenty-years, was the offensive cohesion that took place almost immediately in the starting lineup. With the addition of a second long-range shooter in Patty Mills and a legitimate rim-running threat in Jakob Poeltl, the dubious spacing of the last fourteen games all but melted away, replaced by a veritable gyroscope of off-ball movement and backdoor cuts. The bench suffered a bit from Mills’ extraction (they were outscored sixty-three to forty-three), but with the return of White to either group (I, for one, continue to root for his assimilation into the starting lineup) the difference in scoring should be sufficiently supplemented to point of relative balance between both units.

What might ensue at the return of White (should the principal changes of last night hold) is anyone’s guess, but the outcome could be intriguingly positive. If nothing else, it was resoundingly proven that the return of a quality defender is a must for this Spurs team rather than a luxury as it might have been in the past. That balance is more fragile than ever for this group and any extended injury to San Antonio’s sparse collection of quality defenders might prove the undoing of what seemed to be a promising season prior to the recent scourge of near-criminal inconsistency.

DeJounte Murray feeding Jakob Poeltl inside the paint for an easy two. pic.twitter.com/KzQZFnQbec

Jakob Poeltl with the and one! pic.twitter.com/6I6eS15P1N