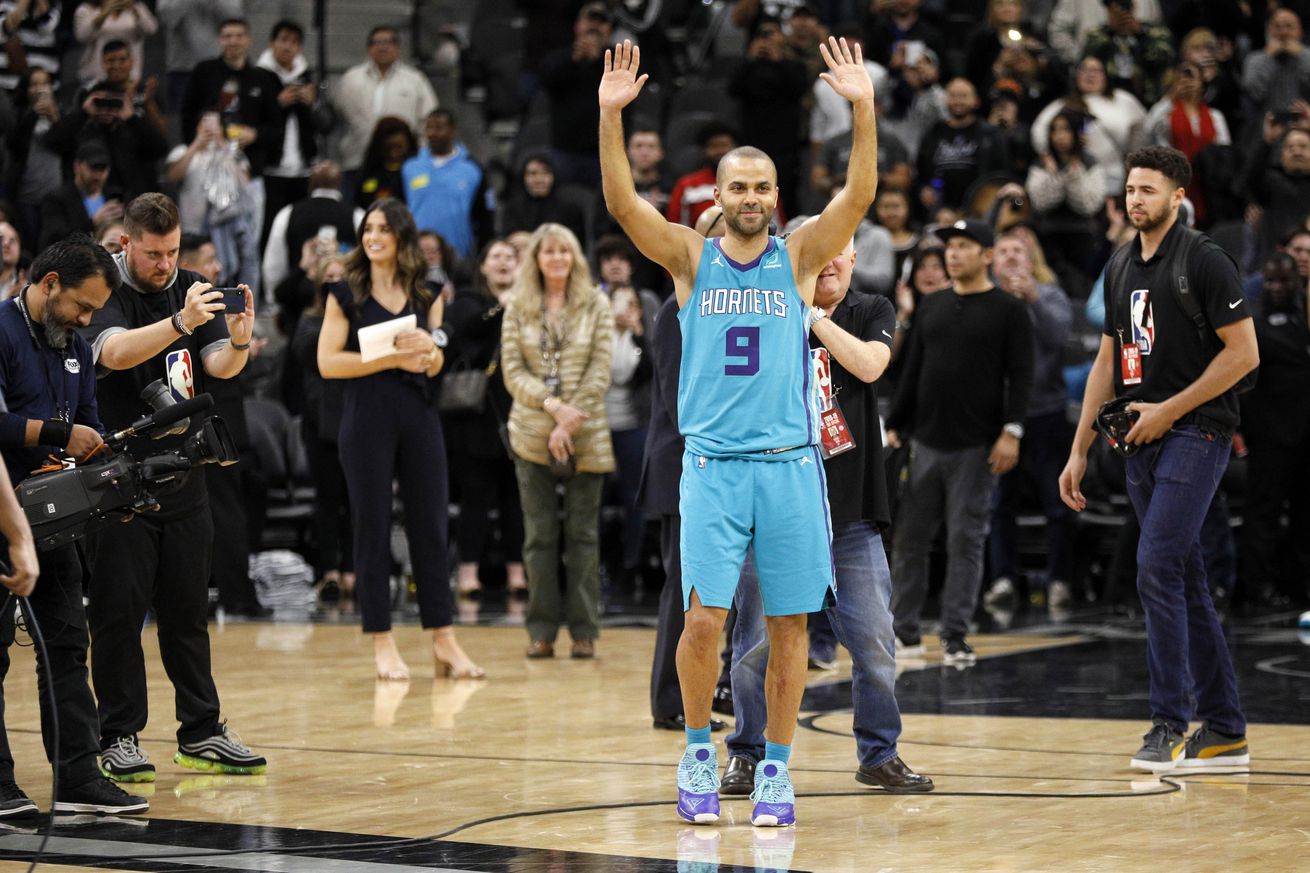 I don’t know if you heard, but Tony Parker came back tonight.

That’s a real kick in the pants, isn’t it? Our little frenchman out there spinning into the lane wearing a teal jersey. I laughed, I cried, and I tried not to think too much about it. Tony. Parker. A Charlotte Hornet. What a trip.

I’m happy with this team right now. I love these guys and I love the journey we’re on with them. They work hard and we’ve been able to see them overcome a lot of adversity in the past few months. This is a group of guys who, in November, couldn’t string together a defensive stop if their lives depended on it and now look like they could put the clamps on just about anyone. We’ve even gotten a few heady glimpses of some “beautiful game” offense in recent weeks. We’ve been witness to LaMarcus Aldridge cementing himself as a premier scorer, DeMar DeRozan evolving as a playmaker and Derrick White developing into an impact player. Jakob Poeltl’s blossomed, Davis Bertans became bad boy, and Patty Mills has infected the bench with his boundless enthusiasm. The list goes on and on. This is one of the most endearing groups of guys in the league and we’re lucky to be a part of this.

I haven’t spent a lot of time lingering on any regrets this year. Timmy and Manu rode off into the sunset and we, as a fan base, have turned the page and started to get excited about the future. That’s something that felt impossible a couple of years ago. Ask yourself whether or not you could ever truly envision San Antonio Spurs basketball without Pop and the big three. I don’t think I ever could. I always just maybe assumed the world end first. I think that’s the main reason I’m so giddy about this group of guys. They’re teaching us how to love again.

It’s all been so great, but then…Tony Parker came back. Timmy and Manu are vacuum sealed in our memories, becoming more perfect and flawless by the day, but Tony is still out there. He’s doing his floaters in the lane, he’s coming around screens with a full head of steam, he’s sneaking little pocket passes into the nooks and crannies of exasperated defenses. He’s doing all that and he’s doing it for someone else. I thought it would be fine. I thought I would just be happy for him and for us. Proud of how we’ve all managed to move on with our lives in such healthy and productive manners.

Maybe there’s a rosier view of this particular evening to be found down the road, but I’m not ready yet. Tony was our guy and, somehow, it feels like we failed him. So often he got lost in the shuffle. He was never as great as Tim or as wild as Manu or a wise as Pop. His time as the best player on the team was cut short by Kawhi’s ascendence and some of his best moments, like the 2013 finals or the 2016 playoffs, were overshadowed by the the team being unable to finish the job. It’s somehow fitting that now, at the end of his career, the Spurs couldn’t seem to find a place for him in the Narrative. So it goes.

Tony seems at peace with everything. He still loves the Spurs and San Antonio and, presumably, all of us. He knows that it would’ve probably been harder for this little Spurs renaissance we’re all enjoying to happen if he were still here fighting Bryn Forbes and Derrick White for minutes and chose to, like the hero that he is, do us one last favor he on his way out the door.

Tony Parker should’ve never worn teal. Maybe some day I’ll feel at peace about it too but, right now, all I am is sad.

A glooming peace this morning with it brings,

The sun, for sorrow, will not show his head.

Go hence, to have more talk of these sad things.

Some shall be pardoned, and some punished,

For never was a story of more woe, than this of Charlie and his missing Marco.