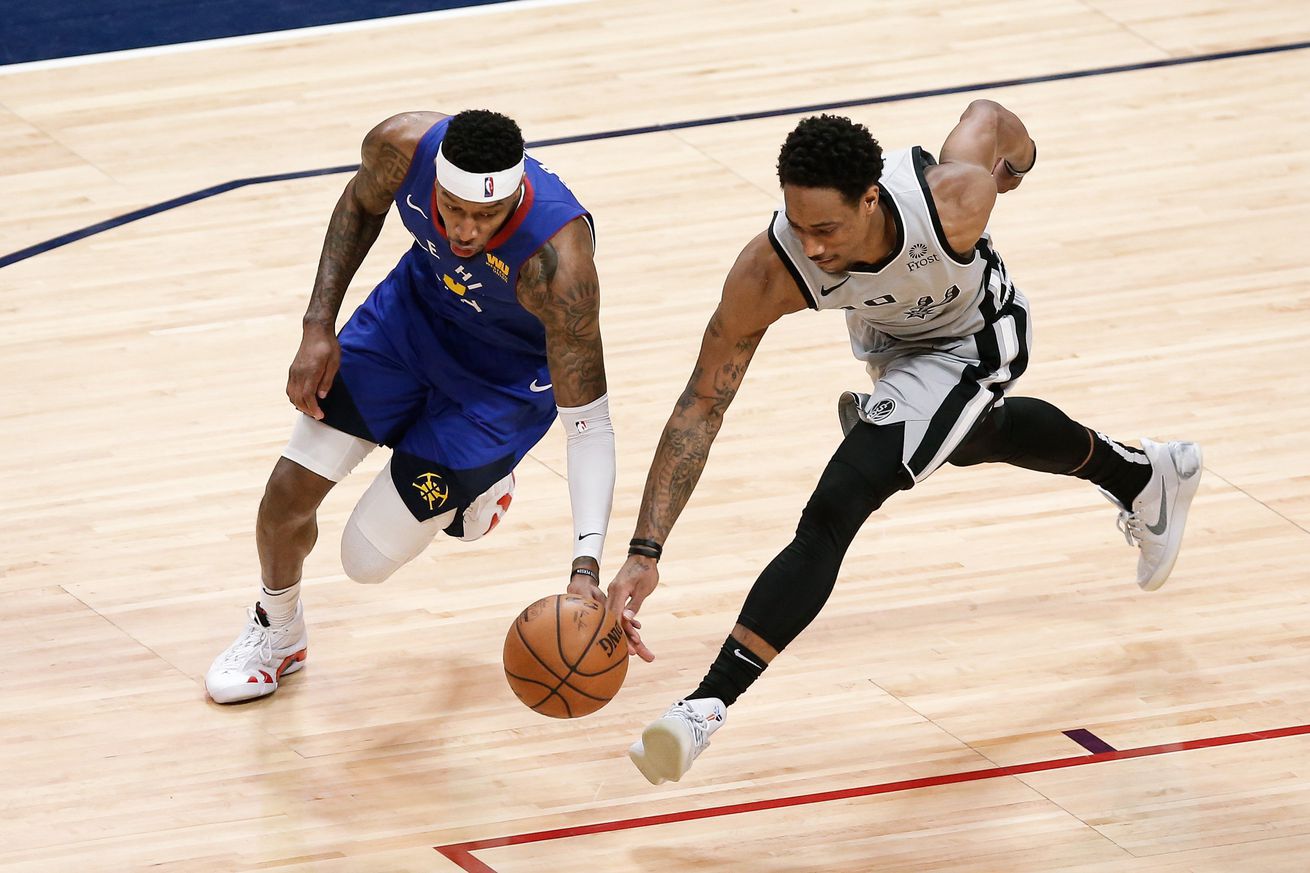 A terrible night in Denver puts the Spurs on the brink

The Spurs have picked a truly baffling time to stop making shots and I sure wish they’d cut it out.

People have always said that the Spurs don’t beat themselves and in a certain sense that’s true here. Full credit to the Denver Nuggets who have looked like a completely different team since Game 3. They are flying around the court, knocking down great looks, and forcing the Spurs into extremely tough situations. Pick a hustle stat and they’re winning it. The team that’s won these last two games in blowouts is the team that raced out to the top of the Western Conference and stayed there all season. The Nuggets are really good and that’s a big part of the problem.

The other part of the problem is that the Spurs are swooning. We’ve seen it from this group before during the season (a couple of times, actually) and it’s as weird now as it was then. It’s like they got their car is stuck in a mud pit and they keep spinning the wheels faster and faster and the harder they slam on the accelerator the further everything slides down below the earth. They’re pressing. Every single one of them is and it’s forcing them out of all the things this team does best. They aren’t moving the ball around on offense, they aren’t communicating on defense, and the mental errors keep hamstringing them on even the most simple of plays they need to execute. It got so bad that it felt like a miracle when a layup went in last night.

The Nuggets are beating the Spurs and the Spurs are their biggest accomplices. The team that lost on Tuesday night looked like it lacked confidence and that’s not something that’s easily fixed. I remember thinking after they lost to the Knicks during the Rodeo Road Trip, “This team isn’t bad, but it’s sort of broken” and that’s how I feel at the moment. The players on this team are good. The coaches are good. We’ve seen them be great. So why are they being so bad?

We’re probably all a little guilty at times of ignoring the razor thin margin of error they’ve been dancing along all year. The Spurs might be good, yes, but they are also wildly imperfect. In order to win, they have to hit inefficient shots at a highly efficient rate. They need to find three pointers from their bench because their best scorers can’t make them. They have to cobble together an above average defense from a bunch of below average defensive players. Every single thing that’s been written about the Spurs this year outlining their deficiencies has been 100% true and the real magic of this season has been watching them overcome it time and again. It’s easy to get caught up in that magic to the point where watching them slam into the glass ceiling of reality is maybe more of a let down than it needs to be.

There’s still time to turn this boat around and, obviously, nothing is over yet. I know that I personally have counted this team out more times than I care to admit and every time they’ve stormed back from the brink with some kind of absurd winning streak that no one sees coming. It’s a cool thing that they do and I would welcome it now with open arms. That being said, it’s hard not to feel a sense of dread right now. It’s been looming around in the background for a while and now it’s finally here, waiting outside our gates and ready to storm in and end our season for good.

If the Spurs have any magic left, now is the time to use it.

What we learned from the Spurs Game 5 loss to the Nuggets
Source: Pounding The Rock