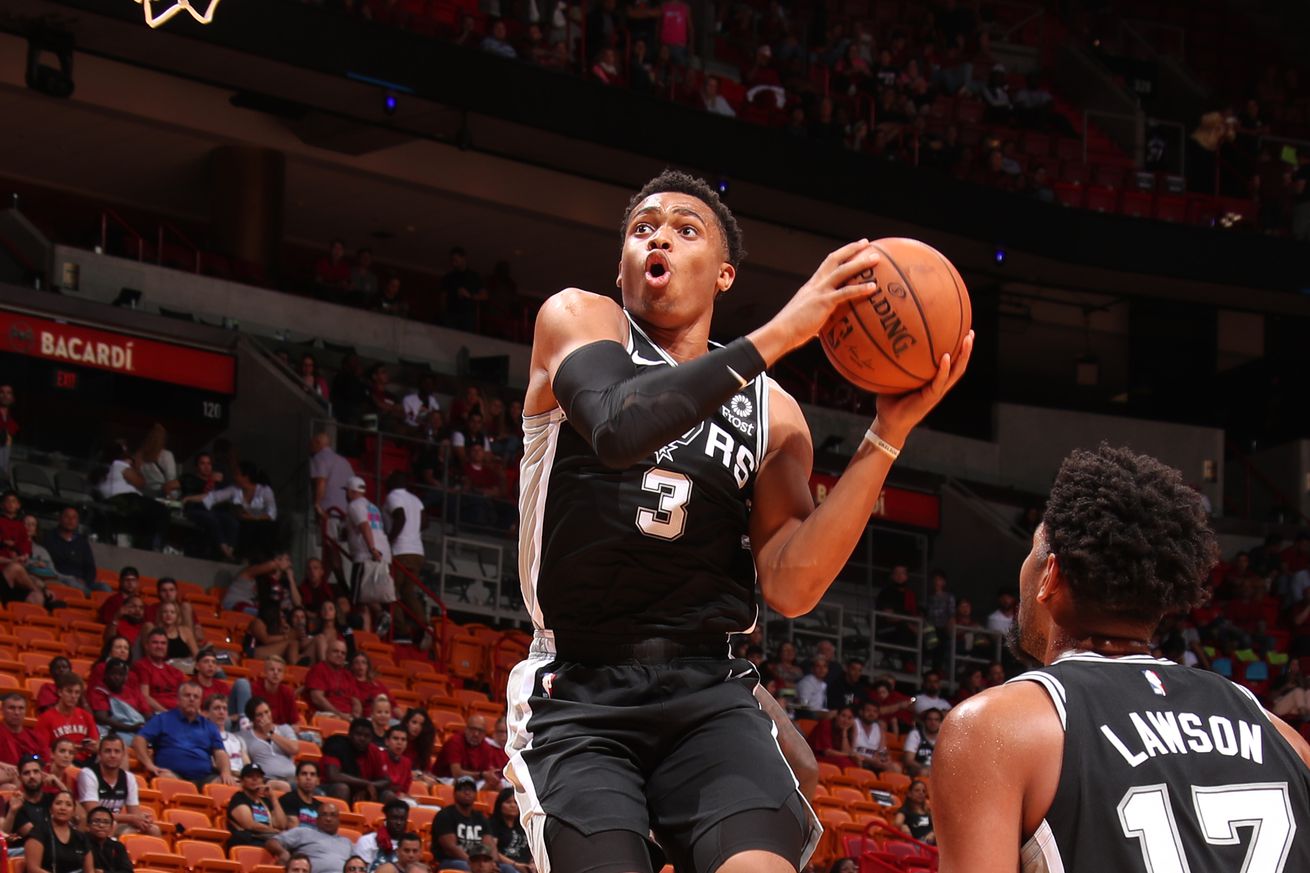 Each showed glimpses of promise in the preseason before heading to Austin to continue to develop.

As the San Antonio Spurs continue to shift the focus of the franchise, much of their future depends on the success of their recent draft picks. Keldon Johnson, Luka Samanic, and Quinndary Weatherspoon all technically fill a need for the Spurs and would have a role on many other NBA teams. However, the productivity of the veterans currently on the roster means that opportunities for the rookies will be few and far between. Unless you plan on watching a lot of Austin Spurs basketball, the preseason was the best chance to see them.

Because preseason games are not included in the Spurs’ broadcasting contract, making fans dependent on League Pass via teams who do broadcast the preseason, Wednesday night’s fourth quarter against the Houston Rockets gave most fans their best opportunity to see the rookies in a real game setting for an extended period of time. Overall, they offered a good amount of intrigue offensively but created many questions defensively as well.

In the last seven-plus minutes, Houston went on a 28-17 run, buoyed by 13 points from Chris Clemons. The young guys struggled with help defense across the board, leading to not just second, but often third and fourth additional opportunities for the Rockets. Gregg Popovich’s players must (above all else) be able to hold their own defensively. It was not surprising at all to see defensive struggles from the rookies, but it shows the level of improvement that must be made before they can likely even sniff the rotation.

Despite the expected struggles, each rookie did present something over the course of play that gives intrigue heading into this season and beyond.

Out of the three players mentioned, Johnson showcased the most defensive potential. Almost immediately after checking into the game for the first time, he showed good discipline as he was able to stay in front and strip strip the ball from Russell Westbrook in transition, leading to a steal and basket the other way.

Additionally, he was aggressive guarding the point of attack and was mostly able to stay with his man with his frame and lateral movement skills. Johnson was regarded as a plus on-ball defender coming into the draft, so seeing these positive signs this early are encouraging to say the least.

Offensively, what he showed was pretty basic, but there were things that can translate anytime. He was active on the glass, including one sequence that led to a putback. The sequence I was most impressed by was an out of bounds play that seemed to be run for Johnson. He received a curl screen at the left elbow, and once he got the ball, he was able to use a nice burst of explosiveness to get the rim and finish at the rack.

Outside of shooting and finishing at the rim via cuts or other plays that rely on his physical tools and IQ, Johnson is a pretty limited offensive player. During his time on the court, there weren’t many instances when he attempted to create, but not much came of it. As the season progresses, seeing him improve with the ball in his hands will be imperative to his development.

In only seven minutes of action, Samanic offered glimpses of the potential San Antonio envisioned when the selected him with the 19th pick, specifically on offense. He was able to do damage both inside and out, grabbing and converting an offensive rebound, drawing free throws out of a baseline post up on Danuel House, and hitting a three out of a pick and pop scenario. While his offensive game will likely be a work in progress throughout the season, it was nice to see those flash plays from him early on.

Something interesting to note: I never really saw Samanic as a high level passer entering the draft. It was not that I did not believe that he could develop the skill, I just did not physically see that particular aspect of his game. Fast forward to Wednesday, and I was ecstatic to see him throw an unexpected dart to Chimezie Metu in the corner off movement. Metu hesitated and ended up missing the shot, but it was the type of quick decision making that could really raise his offensive ceiling and help him outperform his draft stock.

I never got a chance to get too in depth with Weatherspoon while looking at draft prospects, but from what I saw, he seemed to fit the mold of a smart point guard with good feel who would be able to run an offense. At least based on his limited action against Houston, he was almost the complete opposite. Essentially every advanced pass he tried to make either ended up in deflections or turnovers. The one positive you might be able to gather out of this is his confidence as a playmaker for others, but other than that, it was not pretty. Hopefully that this was just a case of preseason jitters, but overall the Mississippi State product had a much better showing in Summer League than the preseason.

The G-League season tips off on November 8. With these three rookies likely spending most of their time there, along with Metu at times and two-way Spur Drew Eubanks, the Austin Spurs will be an intriguing team to watch. I will be there to cover them for PtR this season, but be sure to check them out for yourselves.