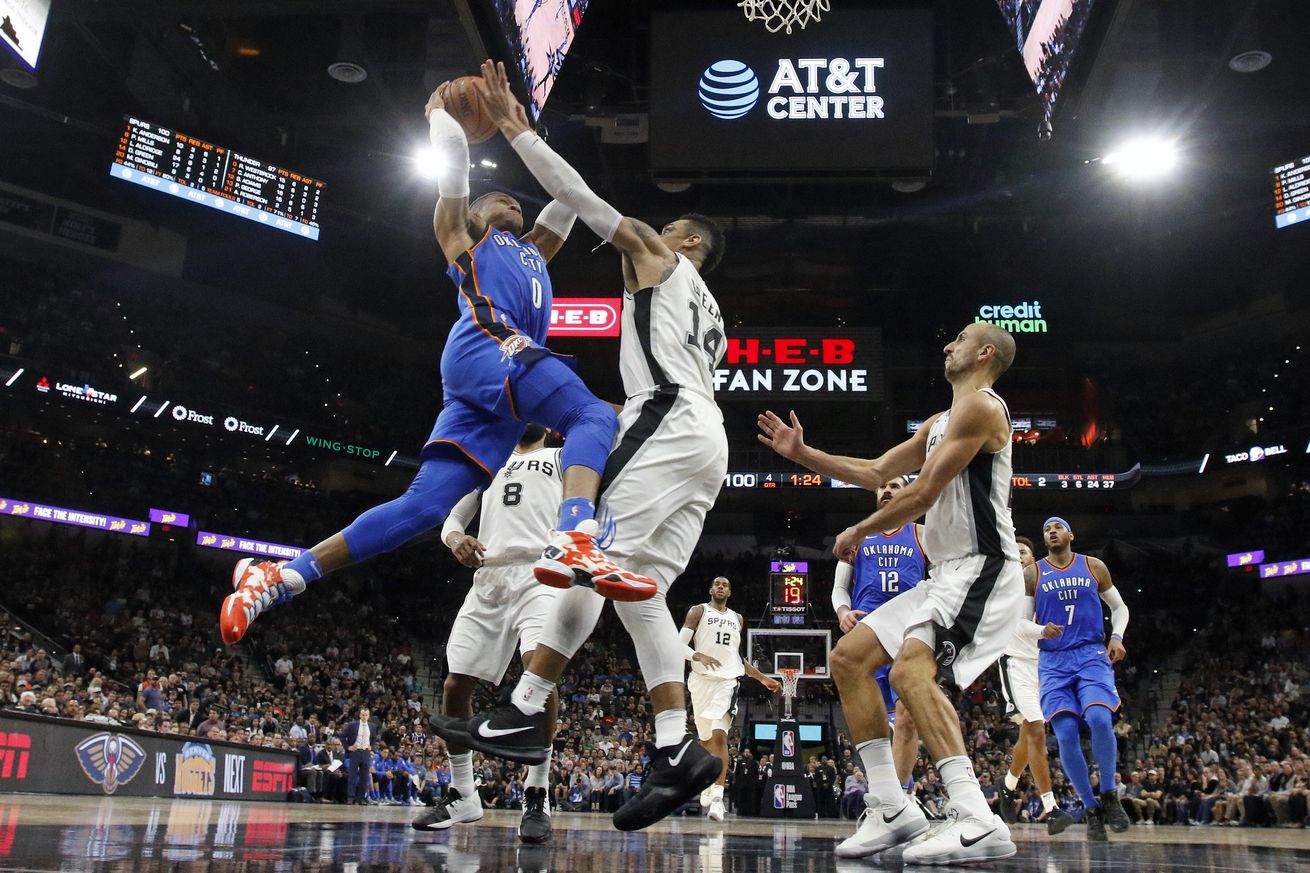 A close look at the redundancies and shortcomings San Antonio has a the guard position — plus other questions that have little or nothing to do with Kawhi.

With Tuesday’s Davis Bertans and Bryn Forbes re-signings, the Spurs roster swelled to 14 contracts — 13 of them guaranteed. For most teams, that might be an indication of an off-season nearing conclusion. That’s not the case for San Antonio, where at least one player expects to be traded, another ponders retirement, and the front office works to establish a direction for the present and future.

It’s a little early for judgment, especially with the uncertainty around a Leonard deal. Still, the glut of wings and notable weaknesses in other areas are a good starting place for questions regarding what the organization’s next moves will be and what a fully realized roster could accomplish.

Can anyone attack off-the-dribble?

The Spurs aren’t strangers to a little roster redundancy. In one of the last great stands against small ball, the 2015-16 squad got 67 wins out of a frontcourt that included Tim Duncan, LaMarcus Aldridge, Boris Diaw, David West, Boban Marjanovic, and Matt Bonner. A skein of smart, skilled bigs who could more or less spell each other defensively made plenty of sense, even if the lack of younger, more athletic options was one of their undoings that postseason.

Next season’s roster has even more glaring imbalances. Carried over from 2017-18 (in which a post-up and pick-and-pop-heavy system slogged to a 17th-ranked offensive rating) are deficiencies in isolation scoring, shot creation and pick-and-roll playmaking. The team also needs at least one more dependable big man to back up 38-year-old Pau Gasol and 33-year-old LaMarcus Aldridge. who, as things stand, will need to carry another heavy load on both ends. Bertans and Rudy Gay round out the group of ‘bigs’, but both are unequivocally tweeners you won’t want guarding opposing fives.

That leaves the Spurs with a fleet of off-ball twos and threes (Danny Green, Forbes, Belinelli, Lonnie Walker IV, Brandon Paul and, for the time being, Leonard and Ginobili) and a trio of guys who will presumably share primary ball-handling duties in Dejounte Murray, Derrick White and Patty Mills. If a Leonard deal nets a formidable wing in return (or if he somehow reconciles with the organization), this group looks a lot better. If not, it may depend on a leap from Murray or White to improve upon last season. Perimeter depth is great in the modern NBA, after all, but it still hinges on those players having the strengths that matter most today.

Mills’ designation as a ball-handler instead of a two can (and should) be scrutinized, as he’s never looked as comfortable creating out of the pick and roll as he does playing off ball, and that doesn’t figure to change in his tenth season. Still, he’d likely be used in that capacity once again. Murray is not yet there as a creator, and White’s inclusion is another stretch, but the former will get plenty of reps and the latter has higher upside than Mills within that capacity and is believed to be due for an opportunity in that role with Tony Parker’s exit. If his standout summer is any indication, White has some interesting potential as a combo guard who can do a little bit of everything on offense.

Which leads us into some other questions…

Would it be bad to rely on a 41-year-old for off-the-dribble penetration?

For now, we don’t know if any of the aforementioned three guys can be counted on to initiate an above-average NBA offense, and that’s a problem — especially after the team had to depend so much on its oldest member last season. Ginobili completed 3.4 possessions per game in the pick and roll, tied for third-most with Mills but at a more efficient rate than Mills or the first-ranked Parker (Leonard averaged the second-most in his nine games). We don’t yet know whether or not the Argentinian will return, but given how much Pop relied on him in crunch time last season, losing Manu would leave the team at an even greater disadvantage moving forward.

How will SA shore up the frontcourt?

Gasol and Aldridge will miss games, and the team (while having played plenty of small ball last season) would presumably still want the versatility of playing two bigs at the same time when necessary. They’re short on cap space before hitting the tax apron, but should still be options. They could offer 2018 second-round pick Chimezie Metu a deal, try to bring 2015 draft-and-stash Nikola Milutinov over, provided they can fit him into the remaining cap and buy him out from his contract with Olympiacos, or dive into a bargain-bin of unsigned bigs that includes Trevor Booker, Montrezl Harrell, Lucas Nogueira, and Jahlil Okafor.

How good can this defense be?

Murray, Aldridge, and Green are all terrific defenders. Beyond that, it’s fair to have some doubts, including with any lineup where guys like Forbes, Mills, and Belinelli (who replaces a great, versatile defender in Kyle Anderson) share the floor. In the end, the team’s ability to sustain a defensively stout identity may depend on the return from a Kawhi Leonard trade. Speaking of which…

Will anyone else be included in a potential Leonard trade?

Whether it’s to make salaries match or to offload an undesirable contract, there’s a chance Leonard isn’t the only Spur moved in a deal. There have been rumblings of Gasol’s $16 million (and partially guaranteed final year) being attached, which makes sense but would further gut the frontcourt. Mills is getting $13 million for three more years, and may be valued by teams in need of knockdown shooting and a veteran presence, and even Paul may still be coveted as a low-risk 3-and-D lottery ticket. After all, he was the subject of more or less 20 blog posts as the next Spurs diamond in the rough less than a year ago. My, how quickly things can change.