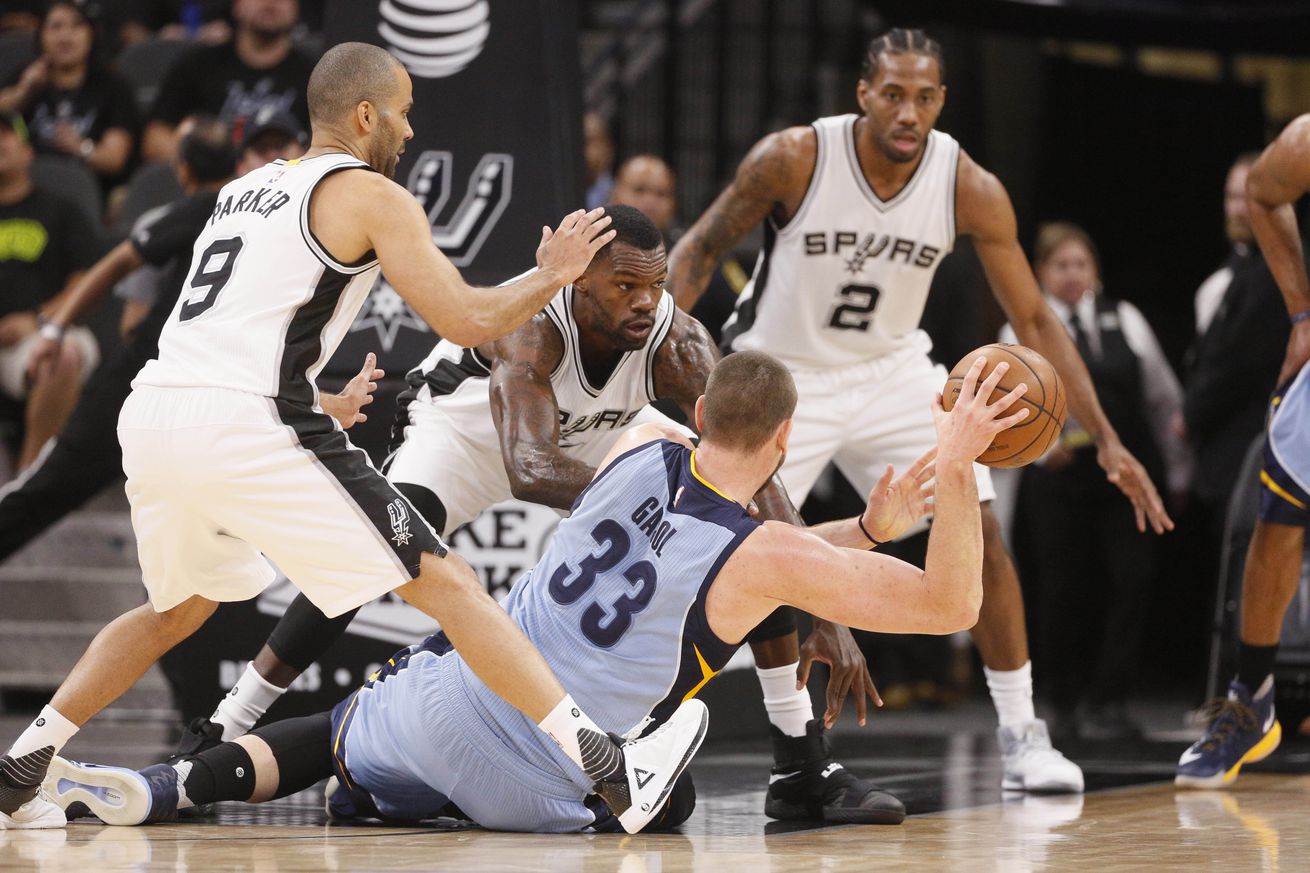 What are each teams’ strengths heading into a (sorta) rematch from last year’s playoffs? We chatted with a contributor for Grizzly Bear Blues to find out.

The Spurs and Grizzlies are set to tip off for Game 1 at 7pm on Saturday. We get a bit of insight from the Memphis side, courtesy of Grizzly Bear Blues writer Brandon Conner.

(A quick note: This back-and-forth happened before the news of Tony Allen’s injury.)

GBB: First off, what are your initial feelings about this match-up? Do you like the Spurs facing off against the Grizzlies, or was there another team you would’ve preferred to face?

PtR: My immediate reactions were deja-vu, followed by a deep, clutched gulp.

But to be honest, the Grizzlies may have been the more preferred matchup in my book among the options available. I know they’ve gotten the better of the Spurs lately but my feeling is, at the end of the day, Memphis still lacks the scoring punch to push this series to seven. The Clippers and Thunder aren’t perfect teams either, but memories of playoff losses to both of them are still too fresh in my mind to want to see them again in the first round.

What did you notice from the Grizzlies’ two regular-season wins over the Spurs that they could replicate in this series?

GBB: I think Zach’s success against the Spurs has been good news. Memphis has always struggled getting him going against San Antonio, but he’s been effective off the bench against guys like Pau and LaMarcus. The biggest question I have is what San Antonio will do with Kawhi here. I don’t have any numbers to support this, but it felt like Pop didn’t keep him attached to Conley during the regular season games, and I wonder if that scheme changes in the postseason. If it does, Memphis absolutely has to find ways to get Conley open. Otherwise, this series will be over quickly.

PtR: Kawhi’s not always been his most effective when trying to shut down little dudes like Conley and Chris Paul — they’re often too quick to let him use his combination of strength and length in the best way.

I’d expect Pop to try a combination of Tony Parker (::another deep gulp::) and Danny Green to slow Conley down, while Kawhi shadows a wing and tries to wreak havoc every now and then with his help D.

Conley and Marc Gasol are obviously crucial to Memphis’ success in this series. Who do you see as the third-most important player, with Chandler Parsons out?

GBB: Zach Randolph. The Grizzlies’ bench just isn’t as deep as San Antonio’s, and they’ll need every bit of scoring they can get just to keep pace with the Spurs when Conley and Gasol are out. If the Spurs manage to shut down Z-Bo, the Grizzlies will have plenty of difficulty finding offense with the likes of Harrison, Daniels, and Ennis. Memphis needs Zach to get points to carry the second unit, so he’s really key to this game.

Where do you think the Spurs’ biggest advantage is in this series, and how do you expect them to exploit that?

PtR: It has to be their depth. With Pau now coming off the bench, the Spurs have the ability to overwhelm opposing second units and break games open at the end of the first and third quarters. The four-man group of Gasol-Manu-Mills-Lee moves the ball very well and tends to produce plenty of open looks. When those fall, San Antonio becomes a scary team for all 48 minutes.

Speaking of shots falling, how much of the Grizzlies’ hopes rest on three ball? They’re shooting it more regularly this season than seemingly ever, and it definitely looks like it’ll be one of the X-factors in this series.

GBB: The Grizzlies set a new franchise record this season with 2,169 three point attempts, beating their previous best by almost 400. The results have been, overall, just okay; their 35.4% is slightly below the league average of 35.8%. But the Grizzlies have been streaky with shooting, and when they don’t shoot well from outside, they tend to lose. Not exactly rocket science, right?

I feel like the three point shooting could be something of an x-factor, but more in a negative way than anything. If Memphis can’t get its shots to fall, they’re going to have a tough time finding wins, but the nights when they shoot around their average or better, they’ll be more likely to pull out a win.

Is there anything in particular about this Grizzlies team that worries you? Any weakness that the Spurs have that you think Memphis can take advantage of?

PtR: Memphis’ bigs. Beyond the brilliance of Marc Gasol, the Grizzlies frontcourt is full of guys that concern me. JaMychal Green Z-Bo still has a few big-time performances left in him.

Them and Troy Daniels, who has aspiring Spurs-killer written all over him.

That said, Memphis still has a number of guys many fans may not be familiar with. If this series is to be someone’s coming-out party, who do you think it might be?

GBB: If there’s anyone who can get hot and help the Grizzlies, I think it’s Troy Daniels. Daniels is generally a defensive liability, he can’t create much off the dribble, and his shooting is streaky, but when he’s hot, he can light it up quickly from behind the arc. If he gets going for a couple of games, that’s a huge boost to Memphis’ offense, and the Grizzlies could use someone to supplement scoring from Mike, Marc, and Zach.

Care to cast your own prognostication?

GBB: I’m not exactly an optimist. While I think the Grizzlies have a shot here, and I expect the games to mostly be close, I think San Antonio just has deeper talent and a more transcendent player in Kawhi. I’d go with San Antonio in a six-game slug fest, and I think that’s something that the Grizzlies should still be proud of.