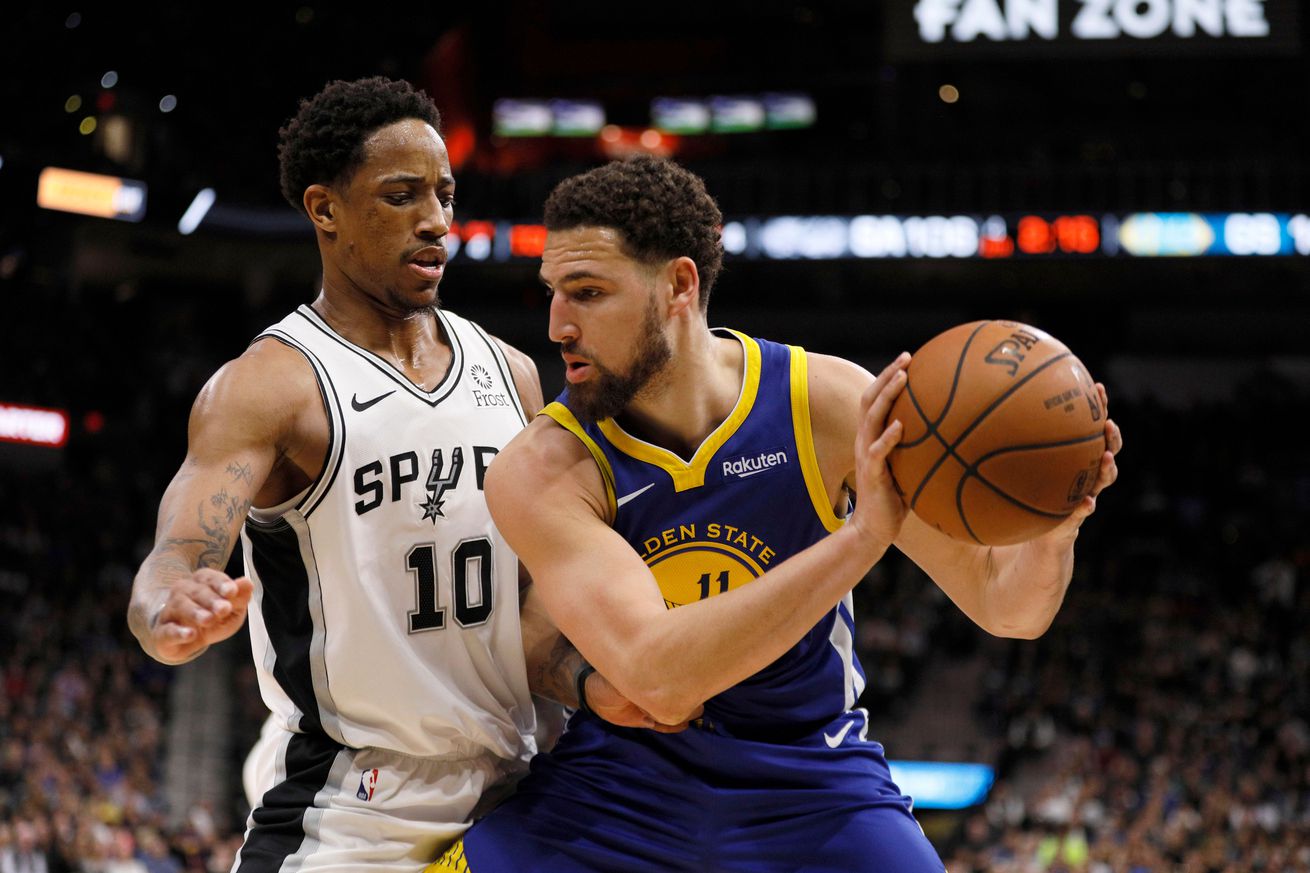 And what it conceals.

In what might have been their most complete performance of the season, the Spurs walked away from the AT&T center on Monday night with yet another victory, this time over the reigning champions. The win moved the team, at least for the moment, into 5th place in the West, and left them just a game and a half behind the Trailblazers for the 4th seed and home court in the 1st round.

That could be especially important as this team is a completely different animal in San Antonio. There is little change on the offensive end, but their defense is far better at home, good for 11th in the league, per Cleaning the Glass.

Late in the 4th, with the Warriors looking to make it a one possession game, the Spurs showed much of what has made them so comparatively stingy on that end of this particular floor.

The Warriors pushed the ball up court after Rudy Gay missed a jumper from the left elbow, with Andrew Bogut grabbing the rebound and immediately hitting Steph Curry on the right sideline.

Derrick White picks Curry up in transition, but like the Spurs, the Warriors love to set early screens. Draymond Green sets his just outside the three point line on the left wing to give Curry a run towards the baseline. Derrick is not even remotely interested in getting screened out of the play, though, so despite taking contact, he slithers over Green and gets back to Curry’s hip.

LaMarcus Aldridge meets Curry on the other side of Green’s pick in perfect position. His hips are open towards the baseline and he’s ready to either contest a pull up jumper or backpedal and slide if Curry drives. Knowing that going baseline against LaMarcus won’t likely pay off, Curry crosses back to his left, right back into Derrick, then kicks it out to Andrew Bogut trailing the play.

While all that was going on, Davis Bertans and Rudy Gay stayed disciplined up top. Davis helped over on Green once LaMarcus dropped to contain Curry and Rudy dropped one foot in the paint on Curry’s drive, leaving the Spurs’ preferred outlet, Bogut 40 feet from the basket, as the only man open.

After Bogut immediately fired the ball to Green on the right wing, the possession was essentially reset. But Curry induced chaos again by curling over a screen from Bogut at the top of the key. Green hits him just as he clears Bogut, and with Derrick in trail position, Davis shows on Curry to prevent the pull up three.

This isn’t Davis’ best work, though. He’s not actually close enough to prevent Curry from shooting – Derrick coming over the top probably had more to do with that decision – which means he’s also not close enough to stop Curry’s soft lob over the top to Bogut on the roll. But Davis does a great job of seeing the help and responding to Bogut’s pass.

If Bogut had made the right read here, kicking it to Klay Thompson in the left corner, this play might have turned out differently. Rudy Gay should be zoning up behind DeMar’s help, ready to threaten the passing lanes to either Thompson or Kevin Durant, and close out to both, if necessary. He starts to drop into that position, but Bogut kicks the ball out to the other side before he can really react.

Assuming Bogut had made that pass, Rudy would have closed out to the corner, and Thompson would have likely hit Durant on the wing. DeMar would have had to hustle back out to Durant before the ball arrived. Whether he can do that consistently or not will likely have a lot to do with how well the Spurs’ defense holds up against playoff competition.

Here, though, DeMar is on his horse. He stops Bogut, reads the play, and is already on his way back to Thompson before Durant catches the one-handed cross court bullet from Green.

That leaves Thompson trapped in the corner with DeMar all over him. After some fancy footwork that used every inch of space available, Thompson finds an angle to attack along the baseline. But both Davis and LaMarcus are ready.

The Spurs helped aggressively off Green all game and Davis is at least 15 feet away from him here, pushing the limits of defensive 3 seconds, ready to pounce the second Thompson starts to drive. LaMarcus responds, too, though, and while that could be a late shot clock choice, it might also be a mistake. If Thompson were able to get a shot up on the glass, Bogut would’ve been in great position for a putback. With Davis helping, it would probably make more sense for LaMarcus to stay in position.

The early and aggressive help does its job, though, forcing Thompson to kick it out. With just 3 seconds remaining on the shot clock, Green has little choice but to pull the trigger.

This is team defense, with all 5 players committed to executing a game plan. While they weren’t perfect, that’s never the expectation. With so much happening so quickly, perfection is rarely the result. What’s important is that on this possession, like the vast majority of their play over the last 9 games, those mistakes didn’t compound into more mistakes.

That the Spurs are capable of hitting this level of defensive execution has been clear since December, but they hadn’t put together an extended stretch of doing so since. It’s strange, because this ought to be the type of habit that a team brings to every single game. Sometimes the shots fall, and sometimes they don’t, but hustle and discipline should always be there.

That hasn’t been the case, though. Each time they’ve appeared to turn this particular corner, they’ve relapsed as soon as they ventured out on the road. Whether this time is different, whether they can play disciplined defense for 48 minutes regardless of whose arena they’re in, may be the single most important question left facing the team.