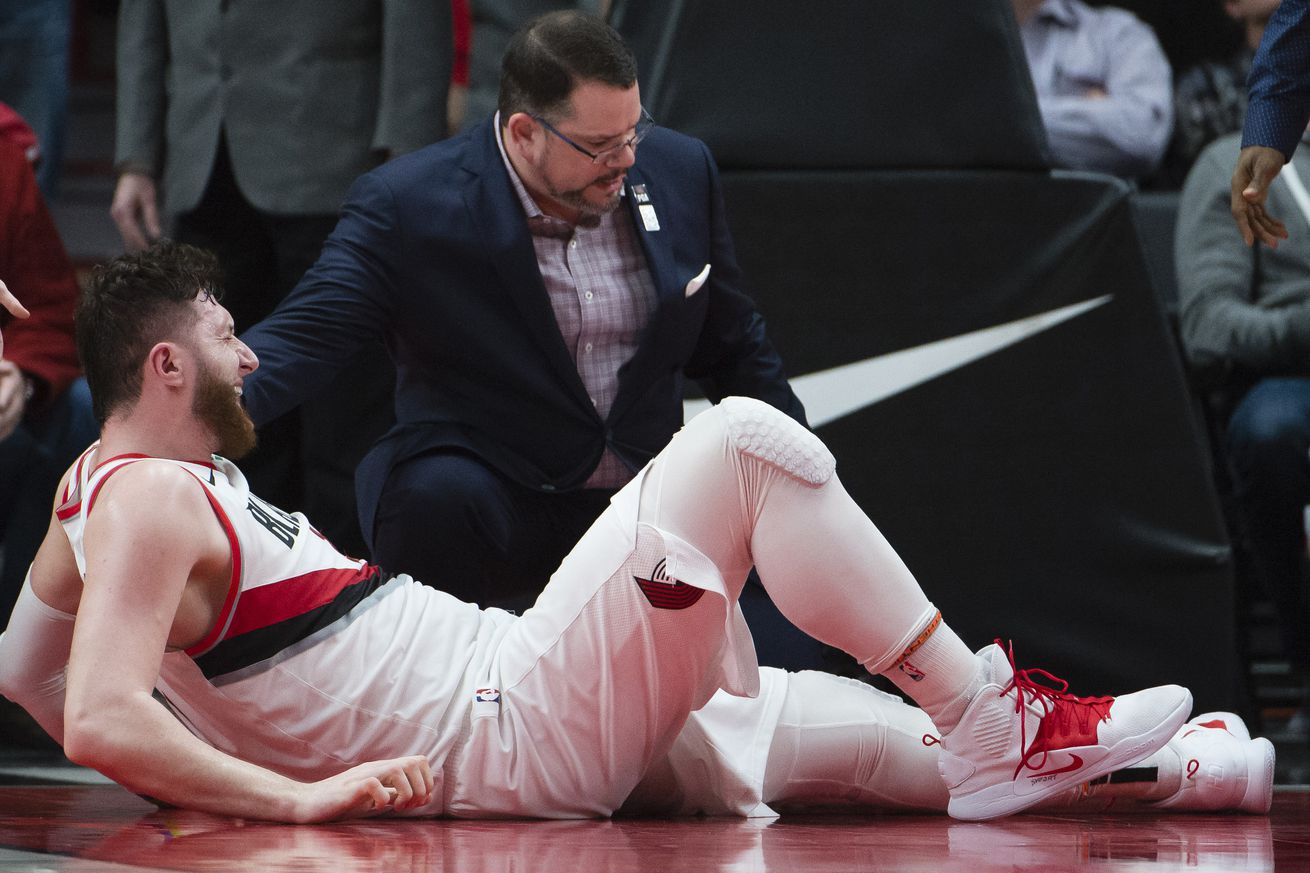 The Trail Blazers should be able to navigate the rest of the regular season without one of their best players, but will be vulnerable in the playoffs.

The Trail Blazers, currently holding the fourth best record in the West, lost one of their key pieces for the rest of the season, and beyond. Jusuf Nurkic suffered a gruesome leg injury on Monday and has a long way to recovery ahead of him.

Fortunately Nurkic’s operation went well. He could make a full recovery thanks to the advances in medical science and strength and conditioning techniques. The Bosnian Beast, who was having a career year, is on a guaranteed contract so he won’t have to focus on the cost of his recovery. He can attack it head on and hopefully return to form when he’s ready. The hope is that he’ll return to playing high level basketball.

As for the Blazers, what happened to Nurkic Monday will have a huge impact on their season. This year they were exceeding expectations in part because Nurkic had taken a leap forward, especially as a defender. Now that he’s out, they are a much more vulnerable team.

So what’ll happen to them now and how will this unexpected setback for Portland affect the Western conference as a whole? Let’s take a look.

The Blazers should be fine the rest of the regular season

Having a serious injury this late in the season has some good and some bad. On the one hand, the Blazers can’t really replace Nurkic at this point. On the other, they will only need to survive for a handful of regular season games and they currently have the depth to do so.

The Blazers traded for Enes Kanter at the deadline. Kanter is not the defender Nurkic developed into being, but he’s a similarly skilled big man on offense. Kanter should be able to replace most of Nurkic’s scoring on his own if he gets more minutes, as he’s both a good pick and roll player and a capable post threat. He’s also a menace on the offensive boards, like Nurkic, so Portland will be able to preserve it’s identity on that end even without their starting center. The defense is going to suffer with Kanter getting more minutes, but the Blazers, owners of the fourth best offense in the league, should be able to outscore most opponents.

Portland also has other bigs that offer different skill sets to facilitate adjustment. If they need more spacing, they can dust off Meyers Leonard and have him parked beyond the arc. Leonard is shooting 46 percent on three-pointers this season, a mark that should dip as he takes more but not so much as to prevent him from being an outside threat. The Blazers also have Zach Collins, a second-year center that has showed flashes of scoring prowess both from the post and the perimeter. He also has the mobility to be a plus defender, even if his instincts are still not developed to the point he can be relied upon for long stretches.

Those three should allow Portland to navigate a relatively easy schedule without losing enough games to drop significantly in the standings, provided Nurkic’s injury hasn’t affected the team’s psyche. There’s a chance the Spurs can move past them in the standings, since they will face mostly cupcakes from here on out, but it doesn’t feel like a sure thing. Portland should have enough depth to avoid a collapse.

The Blazers are now the weakest playoff team, at least on paper

Portland remaining in the top four or five in the West might not be a bad thing for the Spurs. It would give them another potential first round matchup they can realistically beat. At this point the Blazers feel like first round fodder, even if they don’t face a conference power.

On paper, Portland is only mildly scary because of Damian Lillard at this point. Yet as we’ve seen last season when the Pelicans pulled off the upset, if he’s defended aggressively and forced to pass, the offense has a hard time generating good looks. Lillard is a better player this year and should be better prepared to counter that tactic, but the loss of Nurkic certainly doesn’t help the Blazers’ chances of surviving if a team does manage to force the ball out of Lillard’s hands. Beyond his scoring, Nurkic was the team third best set up man, averaging over three assists a game. It’s his passing skill that the team might miss the most on offense. He could facilitate from the post and from the short roll and provided another playmaking option to complement Lillard that is now gone.

The Spurs should be rooting for the Blazers to remain in the top four in the West, so that they have a chance to face them. Whoever does will likely advanced to the second round. The Nuggets, while significantly more talented than Portland, also seem vulnerable. That means that if the top of the West standings stays like it is now and the Spurs manage to position themselves a little better in the standings to avoid the Warriors and Rockets, they should have an opportunity to at the very least have a competitive first round series. Porltand’s misfortune could end up helping the Spurs.