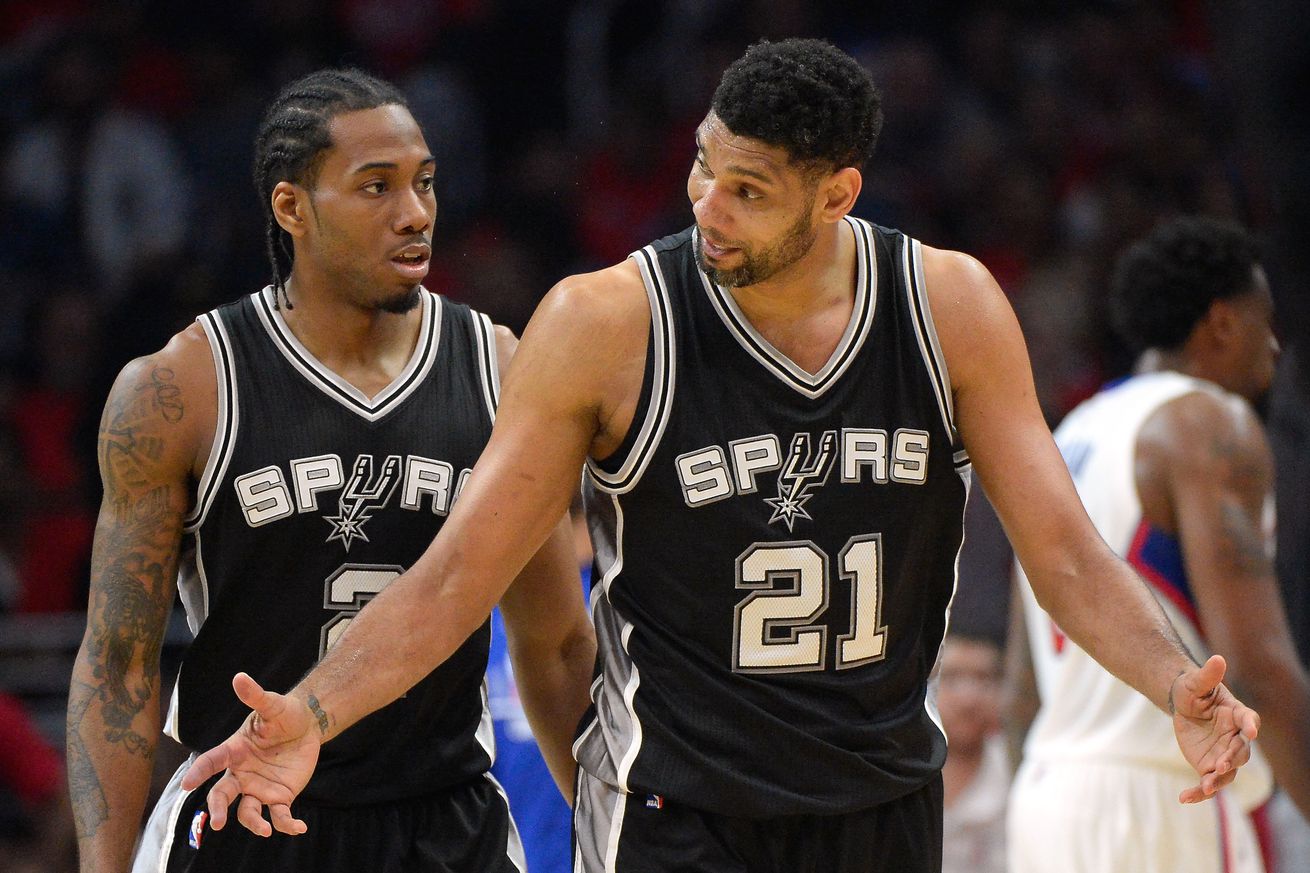 Even amidst a career full of River Walk Parades and Larry O’Brien trophies, there’s always a price to pay.

For the better part of twenty years, San Antonio’s marquee players have been politely, if underwhelmingly, appreciated by those outside of San Antonio. We’ve seen them endure heartbreaking losses and grit their way through some truly ridiculous injuries only to be celebrated once they near the end of their playing careers. This is not an unusual thing for players on small market teams, but it is unusual considering their achievements; chief among them the multiple titles.

I can already anticipate the sort of mindless debates that will ensue once Tony and Manu are eligible for Hall enshrinement. There will be fingers pointing to the relative lack of individual awards and statistics, the argument that their titles are a byproduct of playing on teams led by Tim Duncan and coached by Gregg Popovich, and the suggestions that their eligibility hinges primarily on their status as international players. And yet, this is the path they chose.

For a time, Manu Ginobli was the deadliest and most terrifying shooting guard not named Kobe Bryant. In fact, some stats (Per 100 Pos and VORP) actually suggest that in the playoffs they were virtual equals. Emanuel David Ginobili could have left us long ago to become the transcendent NBA superstar that he deserves to be, the lead scoring option that he was always more than capable of handling the responsibilities for, and the undisputed center of attention (and financial interest) in another market.

Instead, Manu chose to remain here. To sacrifice statistics, and money (even a spot in the starting lineup) for a chance at something greater. He was willing to risk being overshadowed by the greatest power forward of all time (I will go to my grave believing that he should have won the ’05 Finals MVP. Timmy still could/would have gotten a third one in 2013), and one of the game’s greatest coaches, in exchange for championships. Because, for all their mutual inclination towards buzzer-beating heroics, Manu did exceed Bryant in one definitive way; Manu only wanted to win, no matter the cost. He never feuded with teammates and orchestrated their ouster. He never hogged the ball so selfishly that a shot of his that resulted in an offensive rebound putback was called a Manu Assist.

Tony Parker endured nearly a decade of on-court tongue-lashings from his surrogate father/coach (Danny Green seemed to have inadvertently relieved him of that burden back in 2012), while simultaneously drawing the vast majority of criticism from the Spurs Faithful for postseason failings. For years there were whispers about Parker’s true ambitions; that his loyalty was only to titles and to money, and that once those dried up he would leave.

There were complaints that he wasn’t traditional enough of a point guard, that he looked to score too much, that he couldn’t shoot, that he was injured too often (He only actually suffered one season-ending injury, and played less than sixty games only twice, not counting the playoffs), that his wife was distracting (Remember Eva?), that he was inefficient and a terrible defender. There’s even a section on his Wikipedia page entitled ‘Failure to Get a Fifth Championship’, instead of ‘Later Career’ like Tim’s and Manu’s pages.

And how long did it take for him to inevitably abandon the Alamo City? Seventeen years. And as for his postseason shortcomings? He has more playoff points than Larry Legend, Hakeem the Dream, Wilt the Stilt, and Dirk Nowitzki. And he’s one of only eight players in the history of the NBA to score at least 3,000 points, pass for 800 assists, grab 500 rebounds and tally 150 steals during his playoff career. (The others are Jordan, Bird, Magic, Kobe, Lebron, Pippen, and Dennis Johnson — not bad company.) He was one of the youngest point guards to start and win an NBA title, and he’s the Spurs second-leading playoff scorer of all time; ninth on the all-time list.

And yet, season after season, he chose to toil in the relative obscurity of South Texas. And why? Why, after being snubbed for All-Star Team after All-Star Team, and even the regular season MVP in 2012! Why, after PATFO’s dalliances with Jason Kidd the very summer after Parker helmed his team in route to his franchise’s second title? (Yeah, yeah, I know. Speedy Claxton, etc.) Why, after a three year title drought and Duncan falling into an obvious decline, didn’t a twenty-eight year old in-his-prime Tony test free agency in 2010 and leave for a relative windfall?

When there is talk about the best point guards, sometimes they don’t talk about me. But that’s not my main motivation. They can talk about Jason Kidd, Steve Nash, Deron Williams and Chris Paul. I still have the most rings.

Though it may have been a little harder to see than with Manu, it’s clear that Tony also shared in that burning desire to win, no matter the cost.

When outsiders talk about The Spurs Way they mention hard work on the defensive end, offensive efficiency, and the dedication to making that extra pass for the better shot. But that misses the most important point. That’s not the Spurs way. That’s Pop’s way. Pop’s system as it were.

The Spurs Way really has more in common with successful marriages than any of the traits attributed to it by the carpet-bombing members of the national press. And having had the good fortune to observe more than a few successful and lengthy marriages in my own life, I think can tell you exactly what that common trait is: Sacrifice.

Don’t get me wrong, love, affection, passion, communication, determination, flexibility, kindness, patience; these are all vital to the success of any relationship. But ultimately, sacrifice is what makes the difference; the difference in the effort that we put in when it comes to helping our spouses, the difference in whether we prioritize our family or our careers, the difference in the tolerance and dedication that we extend to our friends. And just as importantly, sacrifices must be made on the part of both/all individuals, lest one become over-burdened or resentful.

The great legacy of the San Antonio Spurs, like so many marriages, hinges on both an individual and communal commitment to sacrifice for grander goals — for the success of the whole — and furthermore, for the continuance of that commitment in both the present and the long run. For Danny Green, it came at the price of more lucrative contracts. For David Robinson, it was stepping back so Tim could lead. For Timothy Theodore Duncan it was a legacy label of boring, among other things. Every Spur a different price to pay; a different price to stay.

And perhaps that was what was lacking in the superstar on his way to Canada. Perhaps it wasn’t the influence of a self-interested agent/uncle that led him to leave the Alamo City. Perhaps this whole saga was actually the result of the covert machinations of a dissatisfied star player who didn’t want to see his star shine any less in order for the team’s to shine it’s best.

But if that is the case, then that mindset can’t be allowed to thrive. That’s not how the Spurs play, and that’s not how the Spurs win. And twenty years’ worth of victories have shown that sacrifice is the way to reach the mountaintop. So bearing no ill will (except for in regards to the unprofessional a manner in which this was accomplished), it’s time to say goodbye and good luck.

This town isn’t for everyone. Nor is this team. And neither are its fans. But at their best they are worth it. And I can only hope that DeMar DeRozan knows this already, and that as fans, we treat him more fairly than we did LaMarcus Aldridge.

But until then, I’m keeping the faith. Go. Spurs. Go.