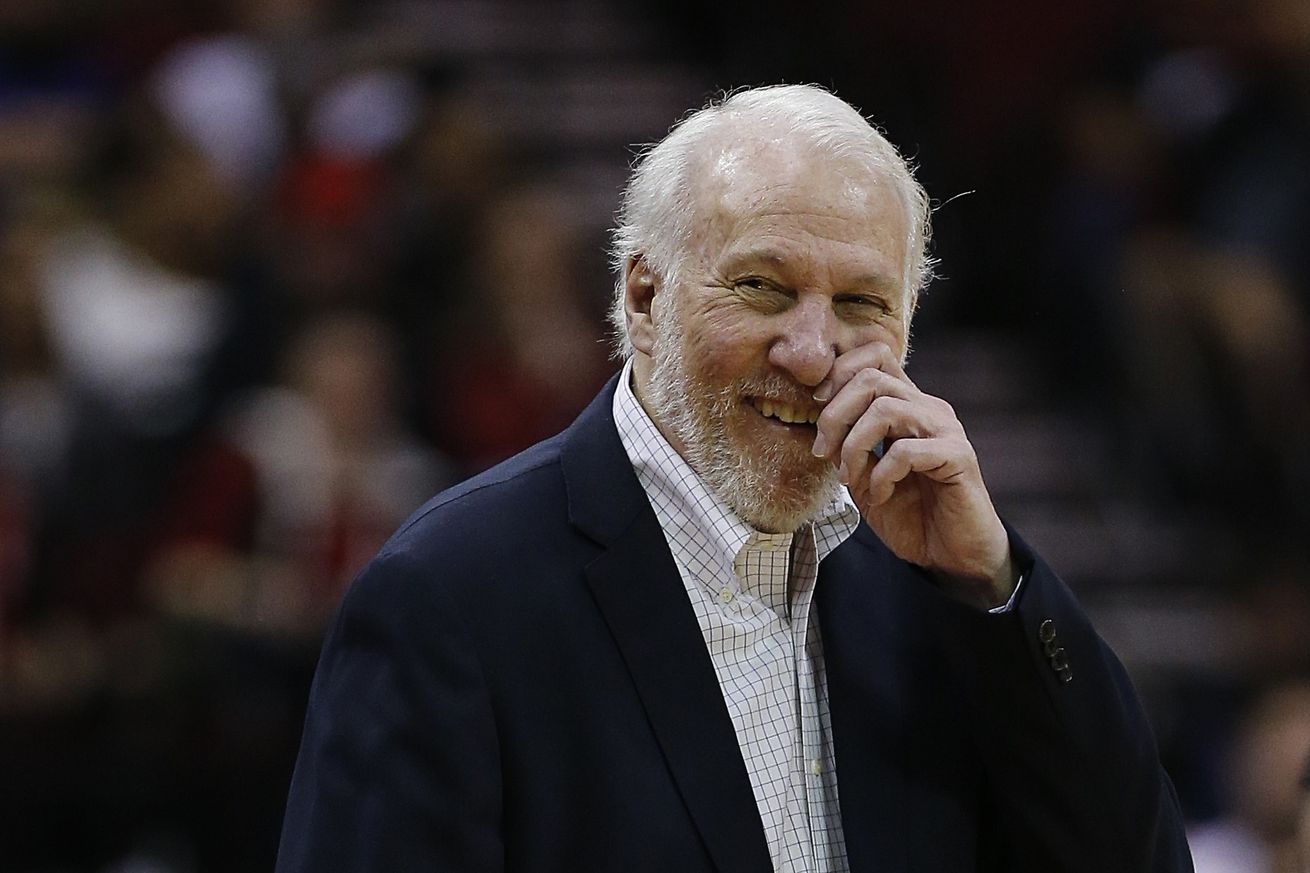 When it comes to interviewing Gregg Popovich, there are three different versions of the San Antonio Spurs head coach the media might get. There’s Standard Pop, who will reluctantly answer questions in as few words as possible for the time standard he is required to meet. There’s Grumpy Pop, who doesn’t even want to hear any questions about what his team did on the court, needs to work on, etc. (Oddly enough, this version tends to show up the most after wins because “nobody’s happy”.)

Then there’s Chatty Pop. Whether he’s in a particularly good mood, just feels like talking that day, or wants to be philosophical with the sometimes clueless, smart-alecky, or even afraid-to-be-Popped media, Chatty Pop is usually viewed as the best version of Pop with the best answers. Which brings up the question: what if Chatty Pop was around all the time?

I am the answer to that question. For as often as I’m able, I will tackle questions from a current topic, or whatever’s on every Spurs fans mind:

Today, the question is: Why haven’t Dejounte Murray and Derrick White played together yet? And below is a pretend media scrum that happens to have gotten curious about getting an answer from Chatty Pop.

Pop, some people have noticed that DJ and White haven’t shared the floor together in the preseason. Is that on purpose?

I never do anything on purpose. In fact, it’s well known that I manage the team and coach the game without intent. (Quiet chuckle.) Seriously, though, during the preseason we want a point guard that will get us into our sets. That’s the priority. So, I’ve been focused on that.

Last year, we played a good chunk of the early season without a point guard. Bryn tried like hell, once he got over the initial shock of being our point guard. The lack of a point guard really set us back last year. So, I really haven’t paid attention to whether or not Derrick and DJ have played together.

Pop, last season, the offense was fine but the defense was outside the top ten for the first time in a decade. Playing DJ and White together could help that. Why aren’t you trying that?

Hmmmm. Why indeed? I think our offense has been terrible this preseason. Very little rhythm, not making shots, etc. So your question confuses me a bit.

I can only assume you think that playing Derrick and DJ together would magically fix something. Or, at least, magically make us better defensively. Our defense is a team effort. It has to be everyone playing tough defense. Helping. Rotating. Staying in front of dribblers. Identifying shooters. Closing out properly. Pushing penetrators to help. Do you think Derrick and DJ are the only two guys on the team that can do all those things? Man, if they are, we are in deep doo doo.

Pop, what can you say about your reluctance to play DJ and White together?

I find it interesting that you purport to determine my mindset. Reluctant? Hesitant? Stubborn? Maybe I’m giddy with excitement about playing them together! Maybe I’m sneakily keeping my rabbit in the hat! I could possibly even be bemused or whimsical. I like whimsical. Fits in with the previous question and my lack of intent.

Let’s do a slow walk through history assigning motivation — this could be fun. Dear Mr. Floyd, why so averse to let David Gilmour sing? Gee Mr. Hand, why so loath to cut Mr. Spicolli some slack and just pass him already? General Napoleon, why so indisposed to invade Russia again? President Trump, why so remiss…Ok, let’s move on.

To follow-up on that topic…

(Cuts off questioner just as they’re starting) In the absence of any good questions … and reporters, I’ll tell you what I think. I think both players are spectacular in their own way. They bring very different skill sets and abilities to the table, but at the same time can be viewed as somewhat interchangeable. As I said, the point guard’s primary job is to get us into our sets. Both DJ and Derrick are very good at this. Their ability to handle the ball, deal with pressure, and organize everyone is critical to us. Not to mention their ability to defend, which is something I also happen to value.

As a result, I expect I will always be playing one of them. Now, if you split those 48 minutes in half, you get 24 minutes each as a point guard. Now, I’m not putting minutes restrictions on anyone, but I think it is reasonable to expect both guys to be in the 32-minutes-per-game range. My exemplary math tells me this means they’ll share the court for at most 8 minutes per game. Those 8 minutes aren’t something I’m worried about at the moment.

Enjoy the season! I won’t look forward to the next meet and greet with you.