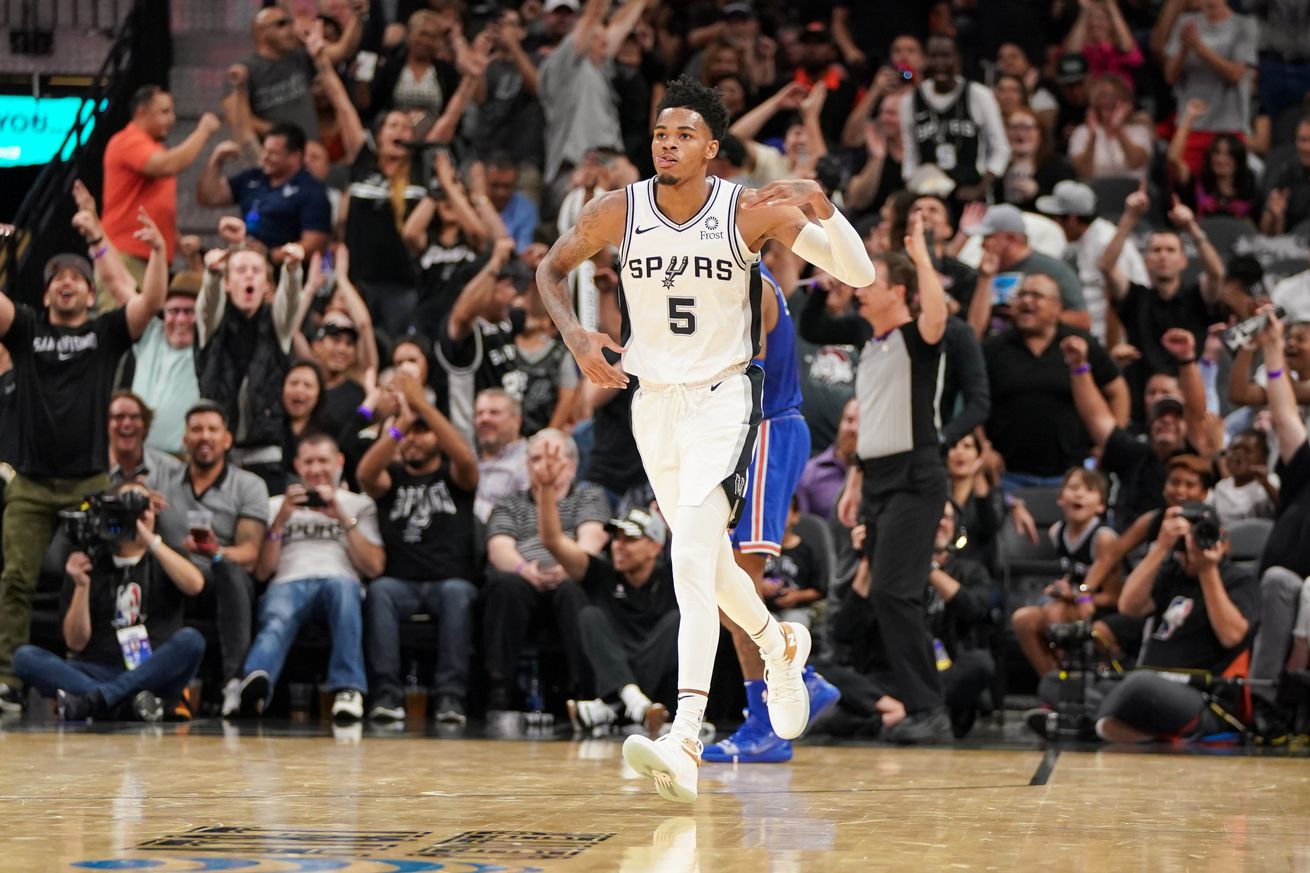 The bonus goals for Murray show where the Spurs are headed.

Dejounte Murray’s new contract extension has some very interesting incentives. The young guard can make up to $70 million if he can make over 125 three-pointers in a season, exceed a True Shooting percentage, of 58 percent or make an All-Defensive team, according to The Athletic’s John Hollinger.

Sometimes incentives are included to serve as inspirational goals, and that seems to be the case here, for the most part. All of them are apparently considered unlikely, since they don’t seem to count against the cap yet. The Spurs would surely be thrilled to see Murray reach all the benchmarks and get the extra money, as it would mean that he’s made the leap to stardom, but that’s probably not going to happen.

Yet the type of incentives they chose do tell us a lot about how they envision Murray’s development and might help clarify some misconceptions about the franchise’s offensive philosophy.

The most interesting incentive is the one tied to three-point makes. The Spurs are not stuck in the past. Their reluctance to embrace the outside shot as much as other franchises in recent years has been well chronicled, but the fact that they want their point guard to take a lot of them is proof that they understand how important that tool is for both team success and the development of Murray.

Last season, only four Spurs made more than 125 three-pointers: Bryn Forbes, Patty Mills, Davis Bertans and Marco Belinelli. Essentially, the Spurs are asking Dejounte, who so far has attempted a total of 58 threes in his career, to get to that level of volume. It’s unlikely he’ll get there in the foreseeable future, but it’s extremely encouraging that the team actually wants him to make the outside shot a part of his arsenal, since it would increase his ceiling tremendously.

Any incentive built around volume could be problematic, as it could encourage stat-padding, but the Spurs have smartly protected themselves against it by including a separate one that rewards efficiency. It would be impossible for Murray to get a True Shooting percentage — a stat that accounts for three-point shooting and free throws — of over 58 percent while chucking outside shots to earn himself an extra half a million.

Beyond simply serving as a counterbalance to the other incentive, the use of True Shooting percentage instead of field goal or three-point shooting percentage is also noteworthy. For one, it protects the Spurs from having Murray potentially reaching a certain percentage and simply stop taking a particular type of shot, as Moe Harkless hilariously did in 2017. when he stopped taking threes to make sure he received his incentive money.

More than that, it also offers another glimpse at the thinking of the Spurs front office. Clearly the franchise value the better understanding of the game that advanced stats provide. In this case, it means challenging Murray to not only improve his field goal percentage but also his free throw percentage, which has been adequate but not great for a guard. It’s a small detail, but a potentially meaningful one.

The combination of the two incentives should provide a perfect guideline for Murray’s offensive development. To maximize his earnings Dejounte will have to develop his range without neglecting his efficiency. Only 13 guards managed to hit more than 125 threes while logging a True Shooting percentage above 58 percent and the ones who did it while boasting a high usage are either superstars or stars in the making. Dejounte might never get there, but he should strive to be on that list.

Fortunately for Murray, there is one incentive he should be able to secure. He made the second team All Defense as a sophomore and clearly has the tools and the disposition to be a perennial candidate for the honor going forward. His season debut only confirmed that he’s still one of the best in his position on that end, as he wrecked havoc with his long arms and great instincts. It would be surprising if he doesn’t get most if not all of the money tied to his defensive prowess.

No fan can be blamed for not paying much attention to contract incentives and other cap minutia, as it can be boring and often inconsequential. But occasionally those details can be more revealing than they seem.

In this case, we now know that the Spurs are not as reluctant to embrace outside shooting as they recently seemed and that they are setting the bar extremely high for their most promising young player.

Now it’s on Murray to turn those unlikely incentives into likely ones and become the star the Spurs need in the process.