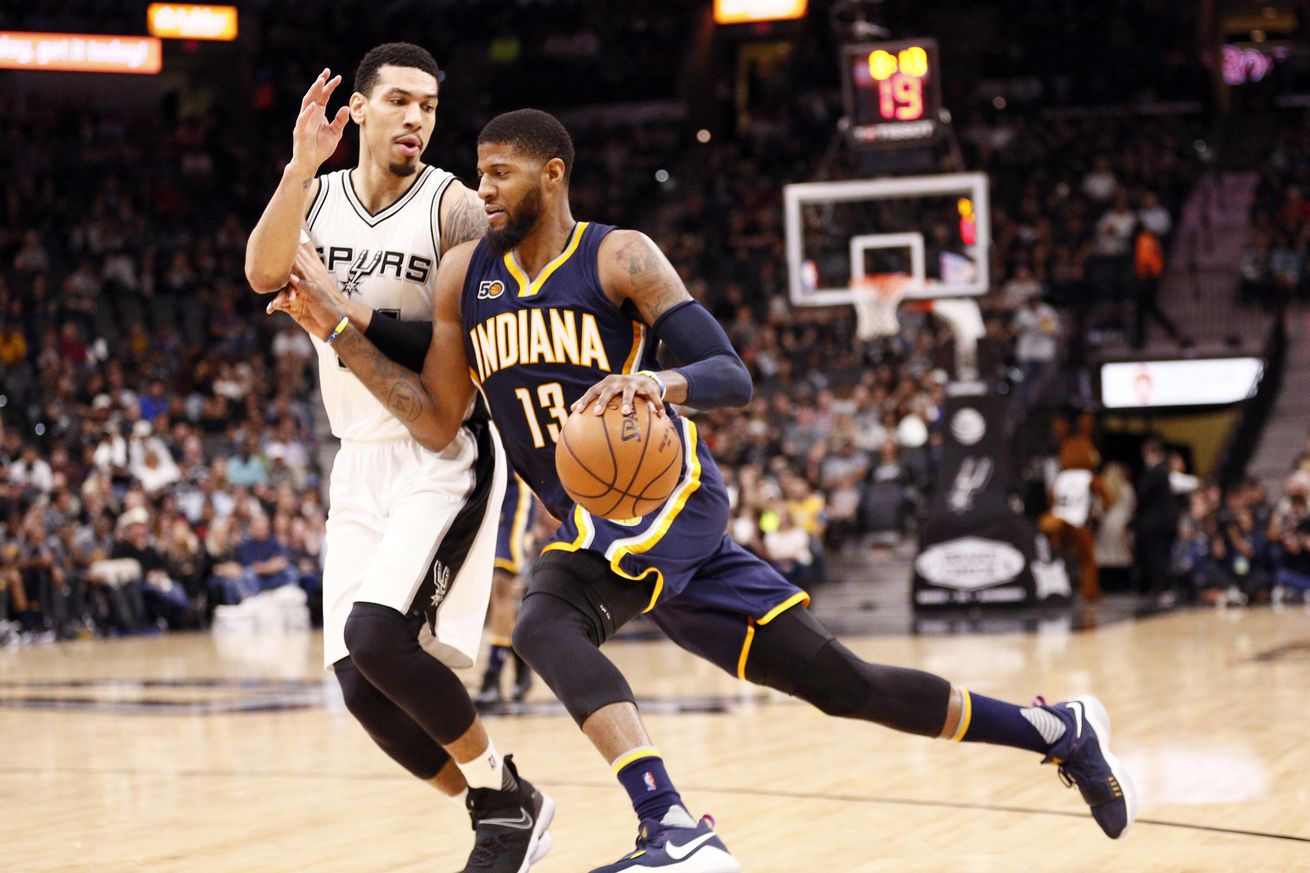 Leading up to the NBA draft, there were rumblings of San Antonio and Indiana talking trades, but no details — which means it’s hypothesis time.

It feels difficult to imagine that the Indiana Pacers won’t trade Paul George. If you leave aside the consensus blunder that was Chicago’s capitulation masquerading as the Jimmy Butler trade, the last 12 months have seen NBA teams pull in huge hauls in exchange for impending free agents. The Brooklyn Nets are spinning their ship around rapidly after parlaying a couple of pieces of trade fodder and a single year’s worth of Brook Lopez into D’Angelo Russell. Last June, the Atlanta Hawks got into the lottery thanks to a three-way trade where all they gave up was the final year of Jeff Teague’s contract.

Seeing as George was so public in his desire to leave the Pacers, and seeing as Indiana is a couple of continental shifts away from true contention, there doesn’t feel like a great reason for the team to hold on to George right up until his contract expires — as opposed to the way the Jazz and Clippers handled Gordon Hayward and Chris Paul respectively.

The San Antonio Spurs have LaMarcus Aldridge, who is not are not the same class of ballplayer as George. In ESPN’s Real Plus-Minus last season, George registered a 2.58, while Aldridge was at 0.96. The gap between the two of them, 1.62, is equal to the production of another very skilled player, somebody like Eric Bledsoe (1.69), Kristaps Porzingis (1.59), or the rejuvenated Ryan Anderson (1.51). These are regular season stats only, so we’re not even counting how Aldridge laid an egg or two in the playoffs. If the rumored trade between the Spurs and Pacers is going to go down, San Antonio is going to have to include more than just LaMarcus.

Given the Spurs’ lack of overwhelmingly attractive young assets, let’s concede, that this deal is unlikely to happen. There are compelling reasons for Indiana to talk with the Spurs, though. With zero guaranteed contracts currently on the books for 2018-19 (although the club option on Myles Turner will inevitably be picked up this fall), this season is a vital one for the Pacers to position themselves for their unavoidable rebuilding process.

The appeal for Indiana in landing Aldridge this summer would be to flip him for more future-oriented assets at the February 2018 Trade Deadline, when teams are far more desperate to push into the playoffs than they are now. Last February, the Raptors gladly gave up a first-round pick and Terrence Ross for a half-season of Serge Ibaka. The Nuggets gave up a first-round pick and Jusuf Nurkic to acquire impending restricted free agent Mason Plumlee, an instantaneous win for the more-patient Trail Blazers. Next February, it’s plausible to imagine the Pacers dictating the trade market by being willing to swing Aldridge.

Here are some ideas for trade packages that the Spurs could put together.

Why the Spurs would do it: In a world where Allen Crabbe is pulling $18 million a year, it feels safe to assume that Green is going to turn down his $10 million player option for 2018-19 — meaning that he is an impending free agent this year. Perhaps the team has already sensed that Green is likely to depart, leading to the recent trade rumors uncharacteristic of the team.

Why the Pacers would do it: Having both Green and Aldridge in the fold allows Indiana to bring in two separate future-oriented trade packages next February.

Why the Spurs would do it: While Anderson is nothing if not a model Spur, players like Kawhi Leonard, George Hill — even DeJuan Blair and Gary Neal — have managed to bust through into championship-caliber lineups far more reliably than Anderson has done over his first three seasons. The moment to sell highest could be right now.

Why the Pacers would do it: The idea is that Anderson’s numbers have been suppressed by all the Spurs-y veterans ahead of him. Indiana gains a productive young player with deep playoff experience who they can retain in restricted free agency.

Why the Spurs would do it: First off, sending Bertans back to Indiana — with just one year left on his unconventional first deal — would pretty much be the greatest trade market in-joke ever, undoing a small bit of the damage done to Indiana from the infamous 2011 draft-night trade. While taking on Jefferson’s salary hurts the Spurs’ cap situation this July, this move limits San Antonio’s long-term losses in the deal. It feels impossible that Jefferson would make a Spurs roster, even with so much guaranteed money — but after the incredible success of David Lee last year, it’s difficult to say what’s impossible for San Antonio to accomplish.

Why the Pacers would do it: The Pacers need to stop recycling through NBA veterans who have made Indiana their uninspired fourth or fifth stop. The team is fortunately not in any kind of cap pinch, but they need to spend 2017-18 making better use of an incredibly valuable resource: NBA minutes. The team should spend next year finding out what they have in recently drafted bigs Rakeem Christmas, Georges Niang, TJ Leaf, and Ike Anigbogu. (Following the February trade of Aldridge, of course.)

Is either team slamming down the phone at these proposals? What needs to be added or subtracted in order for a deal to be made? What other possibilities do you see? Let us know in the comments.