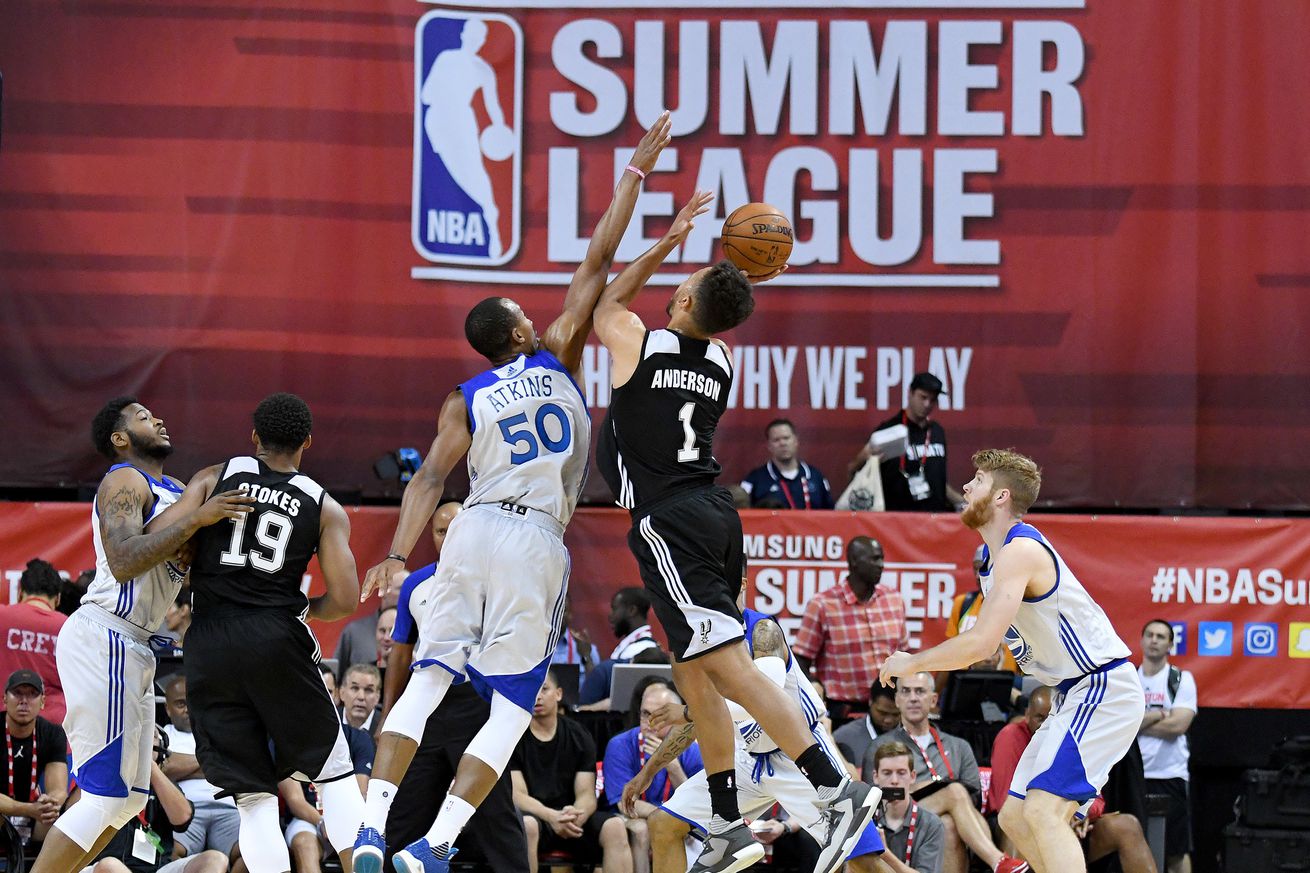 The Spurs opened NBA Summer League play Monday night in Utah against a Jazz team featuring recent lottery picks Donovan Mitchell and Dante Exum. Despite shooting poorly (just over 30 percent), the Spurs kept it relatively close and lost, 87-74. Mitchell debuted with 23 points, 5 assists, 3 steals while shooting over 58 percent from the field and 50 percent from three, and his speed challenged the Spurs’ defense. Exum, the fifth pick in the 2014 draft, was Utah’s second leading scorer with 18 points, on similarly excellent shooting.

San Antonio never led, but played 11 of the 14 players on their roster including three players from last year’s summer league team, Dejounte Murray, Davis Bertans, and Bryn Forbes. Getting their first taste of Utah in the summer were the team’s recent draft picks, Derrick White and Jaron Blossomgame. White led all Spurs with 13 points while Forbes and Bertans each added 12. While there weren’t many highlights for the good guys, here’s a recap of the performance of notable players:

First, it’s true; Murray has added 5 pounds of muscle — and that’s a good thing. His arms and shoulders appeared stronger, providing greater control to his ball movement. Second, he can play on both sides of the ball. Still, in his 16 minutes of playing time he shot only 7 times, hitting 3 buckets for 6 points. He added 5 assists, 3 steals and 3 turnovers, and produced a PLUS/MINUS -16.

He also did this:

Gorgeous move and shot from Murray that was waved off as traveling for some reason. pic.twitter.com/UCMTqS2IXk

During the first half, the 29th pick in the 2017 Draft scored 9 of his 13 points to help bring the Spurs back within 5 at intermission. He showed off a wide range of tools including a nice stroke from 3, a nice step-back 2 and a long rebound after which he went the length of the floor and split the defenders for a layup. His second half performance wasn’t as nice as his first, but he had a solid 22 minutes with 5 of 12 shooting, and 1 of 5 from three. Add in 2 rebounds, 3 assists and 2 turnovers and White was one of only 2 Spurs with a decent PLUS/MINUS of 9. Overall a pretty good debut.

White with another solid move and score. pic.twitter.com/YN2bfZTPSN

Bertans caught a little fire late hitting a couple of 3’s after missing on his first 6 attempts. Played aggressive and finished with 12 points and 3 boards.

White to Bertans for the alley-oop and one. pic.twitter.com/BzCpcvPzkD

Forbes led all Spurs with 29 minutes and shot 2 of 5 from 3 to finish with 12 points after a slow start.

In 24 quiet minutes, the 2nd round draft pick finished 0 for 8 with 8 boards, including one offensive.

Jean-Charles scored 10 points on 5 of 8 shooting by finding open spots on the floor. It was a fair showing by Livio, but he only played 12 minutes.

Nice inside work, particularly off the offensive glass where he captured 6 of his 10 rebounds. Finished with 6 points in 18 minutes.