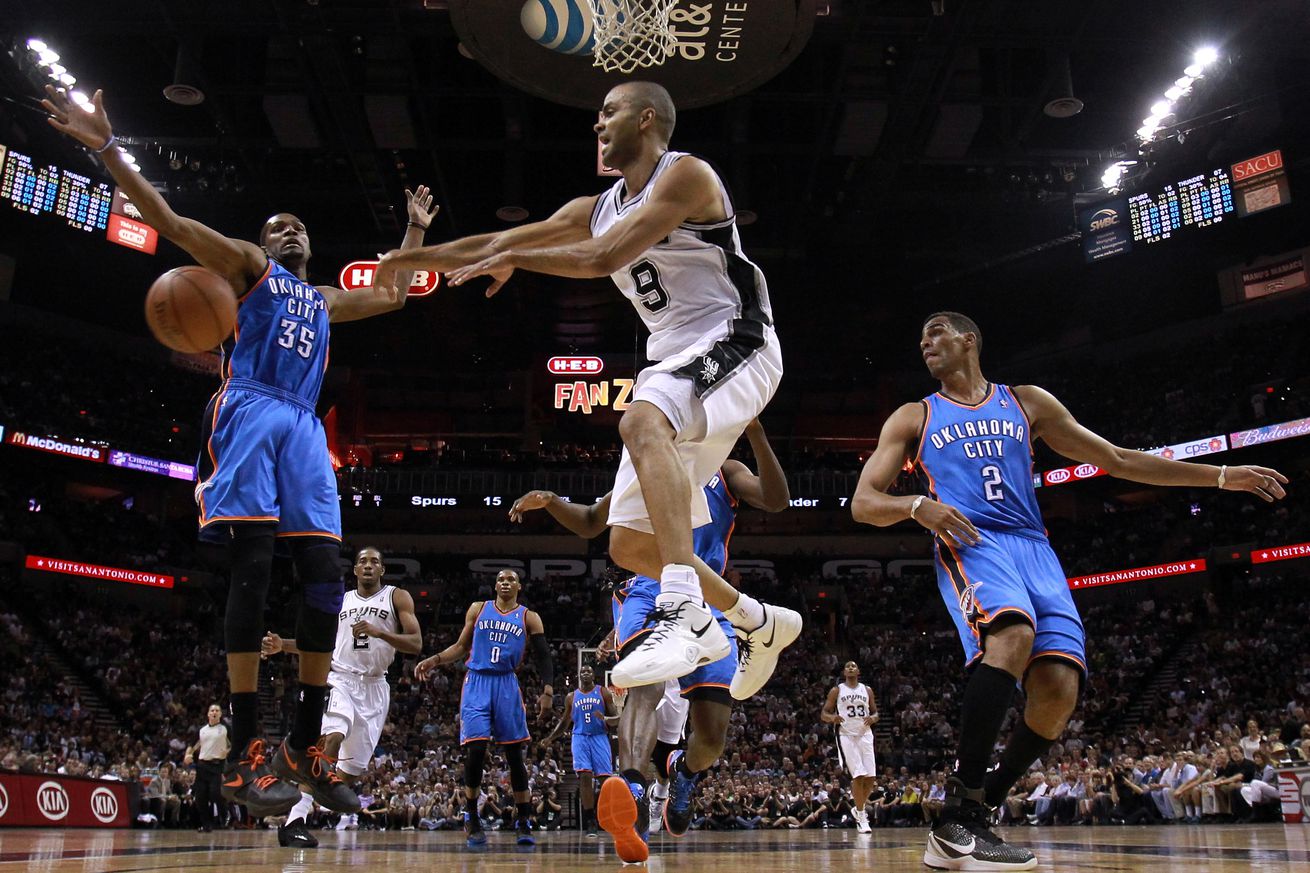 Once defenses learned that the Wee Frenchman could shoot, he had to hone his other skills.

In our second-to-last entry, we’re looking at one of the most underrated skills of possibly the most underrated star of his generation. He may be mostly known for his speed and nearly unstoppable drives to the rim, but once defenses caught on, it was time for him to start honing his other offensive skills.

As far as basketball stars are concerned, Tony Parker will likely go down as one of, if not the most underrated and unappreciated great NBA player of his generation. Overshadowed throughout his career by flashier, more traditional, and/or more “complete” point guards, this is hardly surprising. What is surprising is how underrated Parker’s skills were and to a certain extent remain even among Spurs fans.

It’s not hard to understand why this is; the act of sharing a single spotlight with players like David Robinson, Tim Duncan, and Manu Ginobili necessitates that someone ends up being left out to a certain extent. I myself have been as guilty of it as anyone else. Out of the members of the Spursian pantheon, Manu was the player I always most wanted to play like, and Tim was the teammate I always most wanted to be like; Tony, in spite of his prodigious talent and team-oriented temperament was most often relegated to the position of near afterthought.

At this point in time, Parker’s offensive merits are well known and have largely been well documented: the sudden video-game speed-boost drives to the hoop, the eternally disconcerting wrong-footed layups, and those impeccably well-timed teardrops and scoop shots lofted so very atypically from just inside the defender’s center of gravity and just up-and-out of a sea of flailing arms.

But one particular ability of Parker’s that has been largely ignored has been the development of his passing skills over the years, particularly when driving to the hoop. In the wake of a 2007 Finals performance that served as a coming-out party for his much improved (yet somewhat bipolar) jumper, Parker found himself at the center of both the Spurs’ offensive game-plan and the opposition’s defensive attention, which despite a scorching ability to pour on the points, required an adaptation previously only hinted at.

Once considered a significant weakness alongside his perimeter defense (which in his youth was actually much overstated as he averaged 4.1 defensive win shares and a defensive rating of 101 from 2003 to 2007), a timely combination of absolute necessity and Gregg Popovich’s incessant browbeating led to the development of Parker’s passing serving as the axis for San Antonio’s offensive machine.

Let loose by Popovich in the late 00’s and early 2010’s, the threat of Parker’s interior game regularly freed up players on the perimeter as teams attempted to double the Wee Frenchman, creating passing lanes even Kobe Bryant couldn’t miss, and to his credit, Tony began to hit them with both increasing accuracy and regularity. The more successful his drives, the more open the passing lanes. The better his passing, the more room to drive. Allowed to develop his passing chops in a way that favored his already existing skill-set, Parker became the pick-your-poison buzz saw that defined the Spurs’ most recent postseason successes.

Often ignored in the tale of the 2013 Finals loss is the hamstring injury Parker sustained in Game 3 that led to sub-par performances in a critical Game 4 as well as that fateful Game 7. Barring the injury, it’s fair to wonder whether they would have gotten the job done and not even afforded the Heat the sliver of opportunity to steal the series, which they did.

However, it’s also just as fair to wonder if the Spurs would have even found themselves in championship contention at all without Tony Parker’s gradual transformation into the pass-happy highwayman, who in converting a moderate flaw into a significant asset, helped set the stage for the modern NBA offense, and proved himself every bit as ‘Spursy’ as the rest.