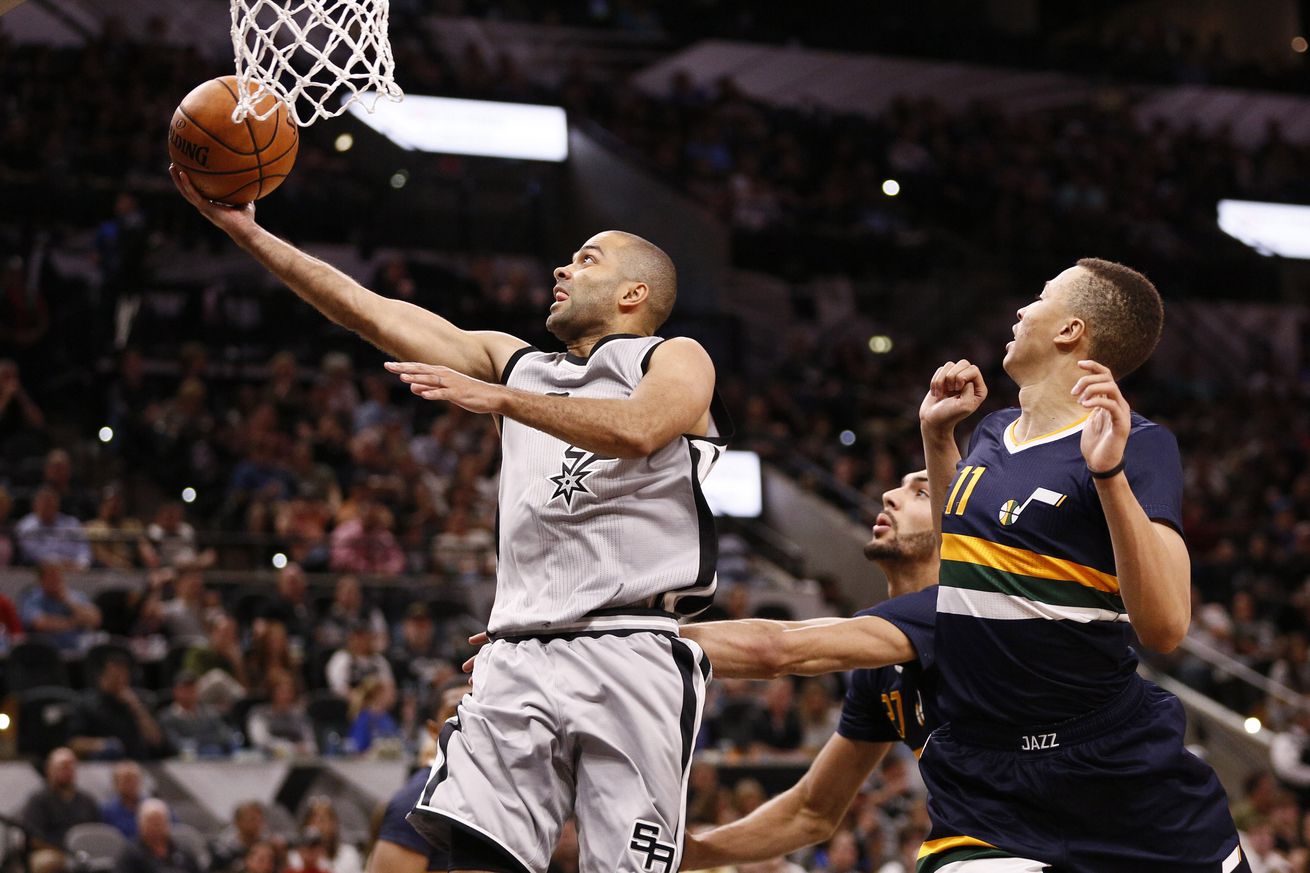 With half the rotation players resting, the Spurs still managed to edge out a Jazz team missing two starters.

We are in the home stretch of the regular season and the Spurs have the second seed on lockdown. That means it’s time to find that tough balance between giving key players rest before the postseason while hoping to continue to improve before the playoffs start.

In that sense, San Antonio’s 109-103 win over the snake-bitten Jazz was a success. Without Patty Mills, Danny Green, Manu Ginobili, LaMarcus Aldridge and David Lee, the Spurs still controlled a tough matchup against a playoff squad to get their 59th victory of the season.

Tony Parker clearly was asked to up his scoring to make up for the absence of Aldridge and Mills, and he delivered. He came out more aggressive than normal, looking to score instead of setting the table. He knifed his way to the rim and pulled up with confidence in the first half and iced the game in the fourth quarter from the line.

You could say that Tony was … cooking tonight

His 21 points were the most he had scored since Jan. 5 and go along way toward showing that Parker can still contribute in the right matchup, after a dreadful performance against the Warriors which had everyone understandably worried.

The backup wings, arguably the second biggest concern entering the postseason after point guard play, also delivered when needed. Kyle Anderson got the nod to start and did a little of everything. His work on the glass and his ability to find the open man were evident from the moment he was drafted, but his disruptive defense this season has been a revelation. Anderson is still slow, but his length frequently allows him to make up for it. He notched three steals and got a couple of deflections using his long arms and perfect timing.

While Slowmo did the little things, Simmons took care of the bench scoring. The Juice had seen his playing time decrease as Pop has gone to Anderson more and more, but he made the most of his 33 minutes on Sunday. He logged 17 points and helped Pau Gasol keep the offense going when Parker and Leonard rested.

It’s hard to complain about any win at this point. That’s especially true for this one, considering the circumstances. Sure, Rudy Gobert feasted inside, but that’s to be expected considering the Spurs were missing two rotation big men and they typically struggle against hyper-athletic centers. Boris Diaw tortured poor Davis Bertans in the post, but we’ve seen him do that to much better players. Even the fact that the Jazz had two big runs — a 21-4 one to end the first half and a 12-2 one to make it a game late — was understandable. They are just too good to be blown out with ease, especially in a game when Leonard didn’t play down the stretch

Utah was missing two starters in George Hill and Derrick Favors, but they’ve been racking up wins despite injuries all season long. In fact, those two players have only suited up in 47 nights each out of 67 possible games. Yet the Jazz currently own the fourth best record in the West, on the back of a defense that can be asphyxiating at times and steady contributions from a deep bench. Anyone who thought that team was going to roll over after a slow start was sorely mistaken.

Fortunately, the Spurs were prepared. After Parker and Simmons carried the offense in the first half, Kawhi Leonard took over in the second. He scored 19 of his 26 points in the third period, giving San Antonio back the edge they lost on that second-quarter Jazz run.

From then on it was a question of managing the lead and closing strong. The Spurs accomplished both and now are just only one game away from reaching 60 wins for the seventh time in franchise history.

More important than the win, though, were the encouraging signs from players who were struggling and the resolve the team showed while severely shorthanded. This past week was tough for the Spurs, but they are still standing. If they can close the season playing like they did today despite some planned absences, they will be ready for the challenges of the postseason, where anything can happen.

Throw it down, Davis! pic.twitter.com/6ZNqZtXy0p

The Spurs face the Grizzlies at home on Tuesday, which looks to be a preview of a first round matchup. Memphis is coming off a lost to the Lakers and might be without starters Marc Gasol and JaMychal Green, who have missed the last few games. If Pop doesn’t rest anyone, San Antonio should be able to get win No. 60 in a couple of days.

For the opponent’s perspective, visit our friends over at SLC Dunk.