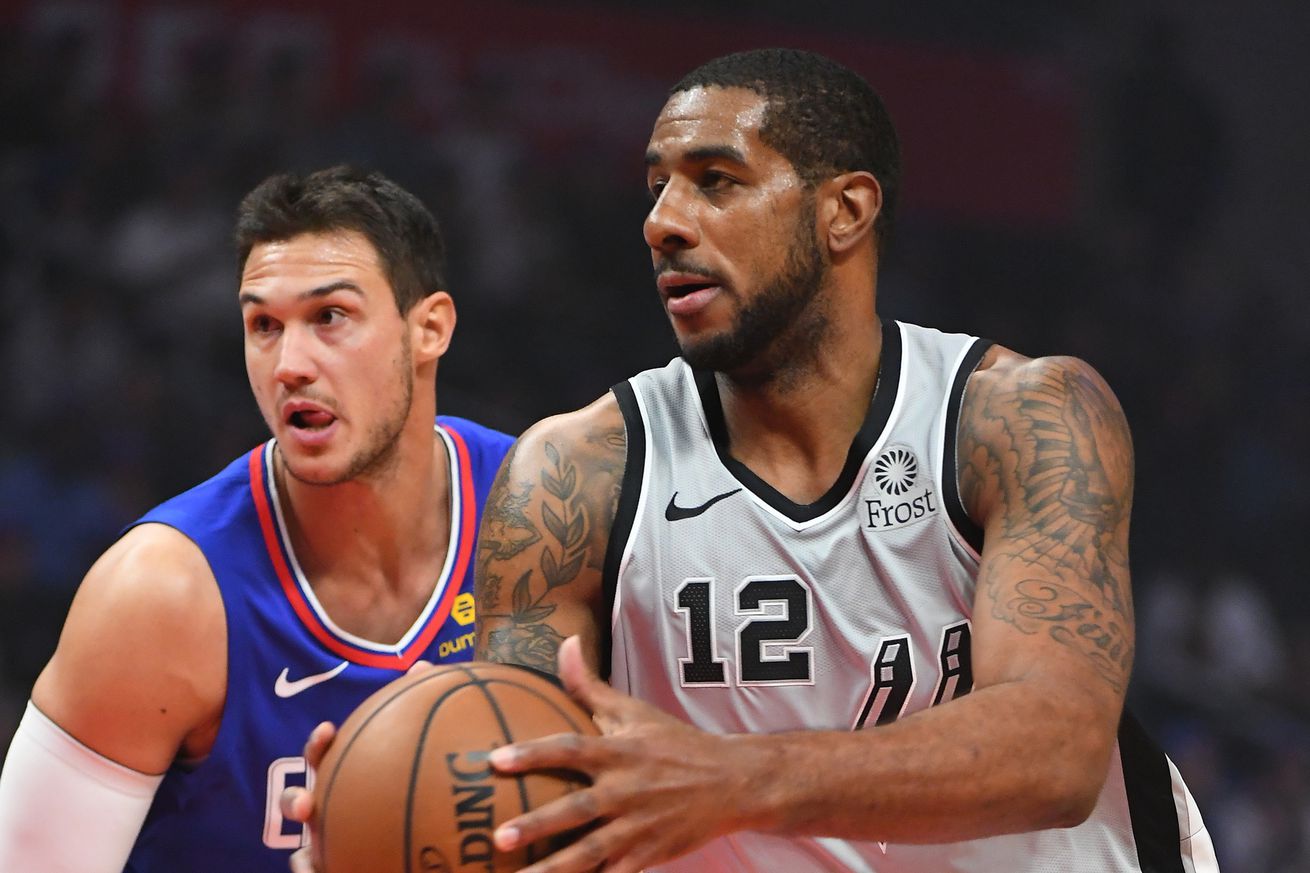 A plea for San Antonio’s big man to stop settling around the basket.

Through the Spurs’ first 18 games, LaMarcus Aldridge is shooting a career-worst 41% from the field, 10 percentage points down from last season — which is as good as any single reason for the team’s shaky 9-9 start. The big man already has three single-digit scoring efforts (more than in the whole of 2017-18), and it bears mentioning because of how closely his scoring is correlated with the team’s success: the Spurs are 0-7 this season when Aldridge scores less than 15 points and 1-9 when he scores less than 20.

Smarter writers than I have diagnosed what could be eating into Aldridge’s early-season efficiency, from what the team is doing in the pick and roll, on post-ups, or him getting the ball later in the shot clock than the rhythm-based scorer is used to. When you look at his shot chart, there’s no shortage of bad, but I’ll offer some more nuance on what could be ailing Aldridge: not enough slamma-jamma.

Of all the things we scrutinize as mere viewers of the NBA game, the dunk is the only one that’s quite literally beyond the grasp of our understanding, a peak basketball act resulting from the discretionary use of extreme physical gifts. It thus takes some temerity for this blogger, his feet propped up as he types, his heart rate still slightly irregular after a holiday of excessive eating and drinking, the details of his personal life getting weirdly specific in this parenthetical aside, to bloviate about a professional athlete not slamming the ball enough. And yet.

Aldridge has but 4 dunks through 18 games, less than DeMar DeRozan, Rudy Gay, and Dante Cunningham, and the same as 38-year-old Pau Gasol who’s played in half as many games. The 33-year-old isn’t a high-flyer and is, tautologically speaking, the oldest version of himself that he’s ever been. Still, a dunk rate of 0.013 would easily rank the lowest of his career, and it comes despite the fact that 46.2% of his shots are coming from within 5 feet of the basket — up from 42.8% last season. That’s a number that should be working in favor of a physically imposing player, but Aldridge is shooting below league average from there, and far worse than his 63.3% from last season.

The lack of explosion at the rim could be symptomatic of him working harder on the other end, a drop-off from age, or still settling with a new system and playing with another ball-dominat player — either way, an increasingly ground-bound shot profile has allowed defenders to recover and denied him of chances to earn trips to the free-throw line, where a couple of easy looks could do wonders for his funky mid-range game. That’s not factoring in the effect that missed bunnies around the rim have on a team’s transition defense, allowing opponents to immediately push the ball the other way while Aldridge, the team’s defensive anchor, plays catch-up.

Take the clip below, where a defensive collapse after a teammate’s dribble penetration leaves him with a point-blank look. Collect yourself and send that ball home, LA.

Sealed inside position on a smaller defender? Catch the lob, spin, and tear the rim off.

Offensive rebound in traffic? Jam that sucker and don’t look back.

Beat your defender on a nifty spin move? Lay the hammer down.

Got a smaller, more athletic defender on your hip? Take a gathering dribble, use your 260-pound frame to create space, and, uh, stuff that bird.

There’s a reason there’s a Tim Duncan’s Top 21 Dunks After Age 35 video. Old Man Riverwalk remade his body and his game in an effort to remain effective through his twilight years. His dunk rate hit a 0.025 nadir at age 32 before trending back between 4% and 6.5% through his age 38 season, and watching him get just enough lift off the ground to posterize opponents became one of the indelible viewing experiences from the last chapter of his career. Aldridge will likely work his way out of his dry spell one way or another, but he can do himself some long-term favors by emphasizing the highest-percentage shot in the game.