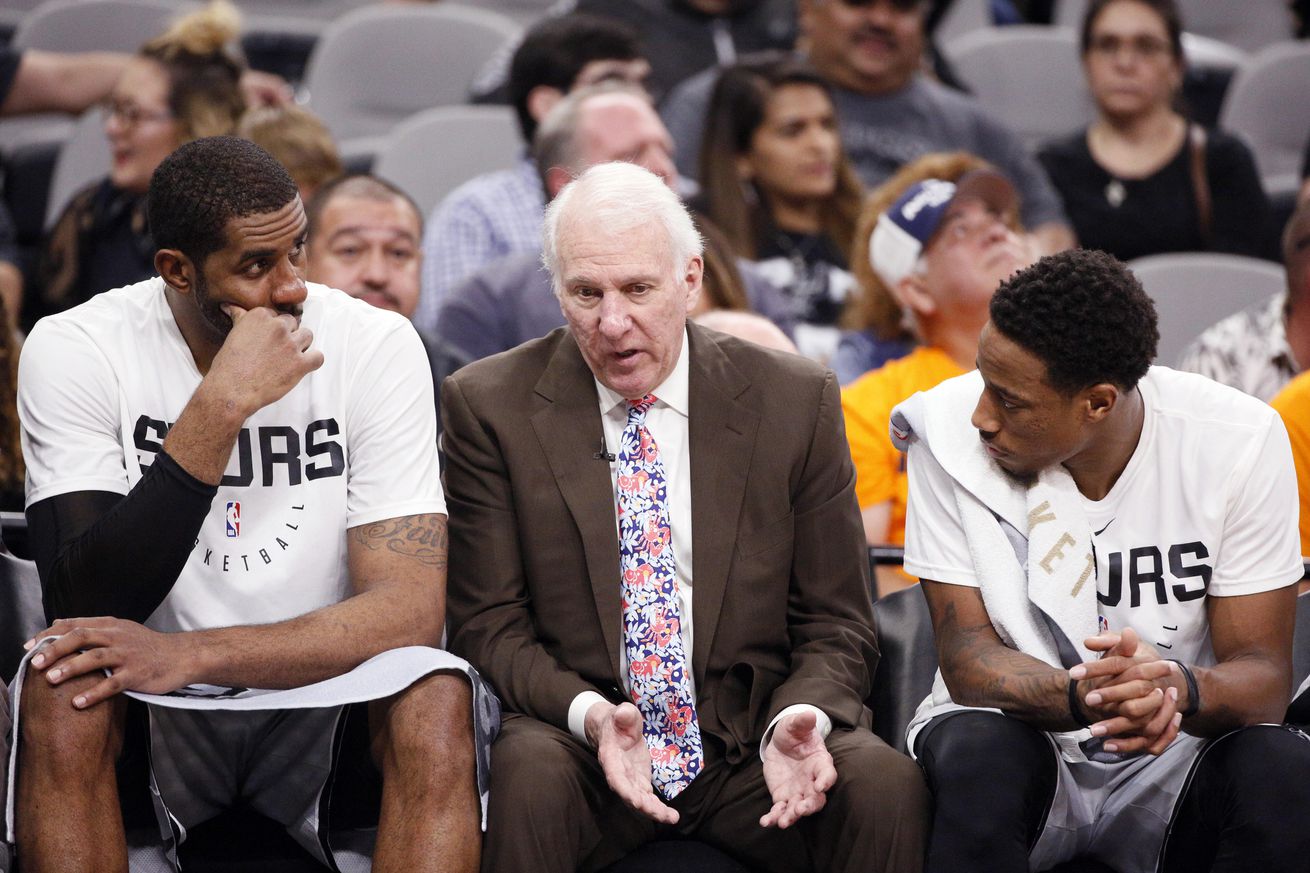 A lack of versatile personnel and a rigid philosophy that doesn’t make sense without Kawhi Leonard have combined to create arguably the worst Spurs team of the Gregg Popovich era.

With a quarter of the season already in the books, things are not looking good for the Spurs. We are likely heading for the worst full season of the Gregg Popovich era, and it’s hard to find much to be optimistic about.

The team seems to be fundamentally flawed. There’s clearly not enough defensive talent to fall back on when a lack of chemistry and an outdated shot profile cause the offense to sputter. The overall lack of versatility across the roster is galling. You can see Pop has found it hard to find any rotations that work.

The Spurs aren’t particularly good. That much is obvious. The circumstances that caused the downturn, however, are more opaque. Understanding them is key to realizing why this team is unsoundly built and what it would take to address its weaknesses.

The Kawhi Leonard trade demand had a gigantic effect on the Spurs’ plans, so we have to start there. The entire identity of the team was based around building an elite defense and reducing risks on offense. At a time in which almost every team embraced pace and three-point shots, Gregg Popovich decided to build in the opposite direction. San Antonio was going to slow the pace down and work the clock in the half court. Instead of going for a pass-happy, drive and kick style that could result in turnovers, they were going to put the ball in the hands of a couple of ball dominant stars that hardly ever coughed it up. The offense wasn’t going to be explosive, but it was going to be steady. And the defense was going to be so good that a steady attack would have been enough to win. We saw this version work well in 2016/17.

Without Kawhi, however, the plan makes no sense. It relied heavily on his mid-range dominance and game-changing defense, which cannot be replaced by committee. Even last season, when the Spurs managed to remain a great defensive team, it was obvious that they lacked weapons on offense to be more than first round fodder. Had they played better offensive players to boost up their attack, their defense would have been too porous for the strategy to work. San Antonio’s approach requires an incredibly delicate balance between offense and defense for the philosophy to be viable — and that can only be achieved by having a two-way superstar around a carefully selected complementary cast. Kawhi was that player. Once he decided that he wanted out, everything the Spurs had built around him collapsed.

It’s not the Spurs’ fault that they had no chance of getting a player similar to Leonard on a trade. But they did have opportunities to change their approach. Rebuilding was one of them, but from what’s been reported it wasn’t considered. They could have doubled down on what (sort of) worked last season by moving Kawhi for some defensive-minded players and build a low-ceiling, high-floor team around LaMarcus Aldridge, but that clearly wasn’t appealing enough to management. Going back to the drawing board and rebuilding the system from scratch once again could have made sense, but was probably not something Pop wanted to do. So they instead decided to keep the underlying philosophy in place while hoping DeMar DeRozan could at least fill Leonard’s role on offense. The decision itself is not looking great, but the execution of the trade and the surrounding moves look even worse.

Arguably the biggest issue with this version of the Spurs is how imbalanced their roster is. They have six guards but just four players between 6’6” and 6’9” — and one of them is Quincy Pondexter, who barely plays. Only one of their forwards can both shoot and defend at a high level, and that’s the surprising Rudy Gay, — whose career suggests an eventual regression as an outside threat. They also have three centers who are ground-bound and not comfortable switching. There’s very little adaptability on the team, which is an issue that was least partially created by the trade. The inclusion of Danny Green without getting a wing back looks disastrous in retrospect. The Spurs instead got back Jakob Poeltl, who is a good prospect but can only play one position.

So here the Spurs are, with an outdated offensive system designed to slow things down in order to force opponents into half court battles that they don’t have the defensive acumen to win anymore. They are ill-prepared to counter semi-modern defensive tactics because they lack versatile offensive players who can shoot, pass and dribble. On the other end they have too many liabilities and too few defenders with any kind of positional fluidity at a time in which being able to guard up or down a position is key. They rely too heavily on their ability to be highly precise in their execution on both offense and defense, which is extremely hard to do after so much roster turnover. Any decrease in focus, energy (or just luck) and the Spurs go from mediocre to disastrous.

To be fair, there have been factors that couldn’t have been predicted and have contributed to the Spurs’ struggles. A healthy Dejounte Murray would have helped in some key areas, like perimeter defense and dribble penetration. Pau Gasol’s injury greatly affected the second unit’s offensive output until they recently adjusted. Some players that are available have disappointed. Aldridge has not consistently looked like a star and DeRozan has plateaued after a strong start. Patty Mills struggled badly on defense early in the season and Marco Belinelli hasn’t been hitting shots. The optimized version of this team would certainly be better than the one we’ve gotten. Not great or much above average, mind you, but probably good enough to avoid the more embarrassing losses of the season and to comfortably win 45+ games. Now that prospect is looking highly unlikely.

The question now is, can this season be salvaged? It’s unclear, but the Spurs will certainly try. Tanking is clearly not an option for the organization at this point, so the goal is to maximize the talent available in hopes of making the playoffs. The middle of the season is not the time to implement a new system or to make big trades. There are tweaks to be made, though. Pop already made a big one by reducing Dante Cunningham’s minutes in favor of Davis Bertans a move that should help the offense. Fixing the defense might prove harder to do, but at one point the Spurs were mediocre at it, not awful, so they might be able to get there again. If the adjustments work and Aldridge returns to form, the playoffs might not be a pipe dream.

Beyond this season, the changes will have to be bigger and come either at the personnel level, the system level, or both. Trying to build a smothering defense with DeRozan and an aging Aldridge as the two core players is not a recipe for success, unless the Spurs somehow get at least one huge upgrade at the forward positions. Murray’s return could help on that end, but it would introduce even more concerns about not having enough shooting to survive in a league that has embraced the three-point shot, to Pop’s chagrin. Adding a big piece will be extremely hard, since they won’t have cap space or great assets. Losing Rudy Gay is a possibility. Pau Gasol is probably gone. In all likelihood, mediocrity will await next season, too.

That’s in the future, and a lot can change between now and then. Back in 2017 the Spurs seemed destined to remain a contender, and we know how that went. Maybe there’s an unexpected move that will vault them back into the elite, maybe a draft pick becomes the next Leonard.

If that doesn’t happen, the Spurs will need to do a better job of controlling what they can. The Kawhi trade demand uprooted all they had built, so they shouldn’t be judged too harshly for the results they’ve gotten this year. Yet they they do deserve the scrutiny they are getting for committing to an inflexible philosophy in the first place, then doubling down on it despite clearly not having the best personnel for the scheme.

The Spurs didn’t mean to build a fundamentally flawed team, but they did. They now need to figure out how to temporarily mask some glaring weaknesses before being able to make the changes that must be made.