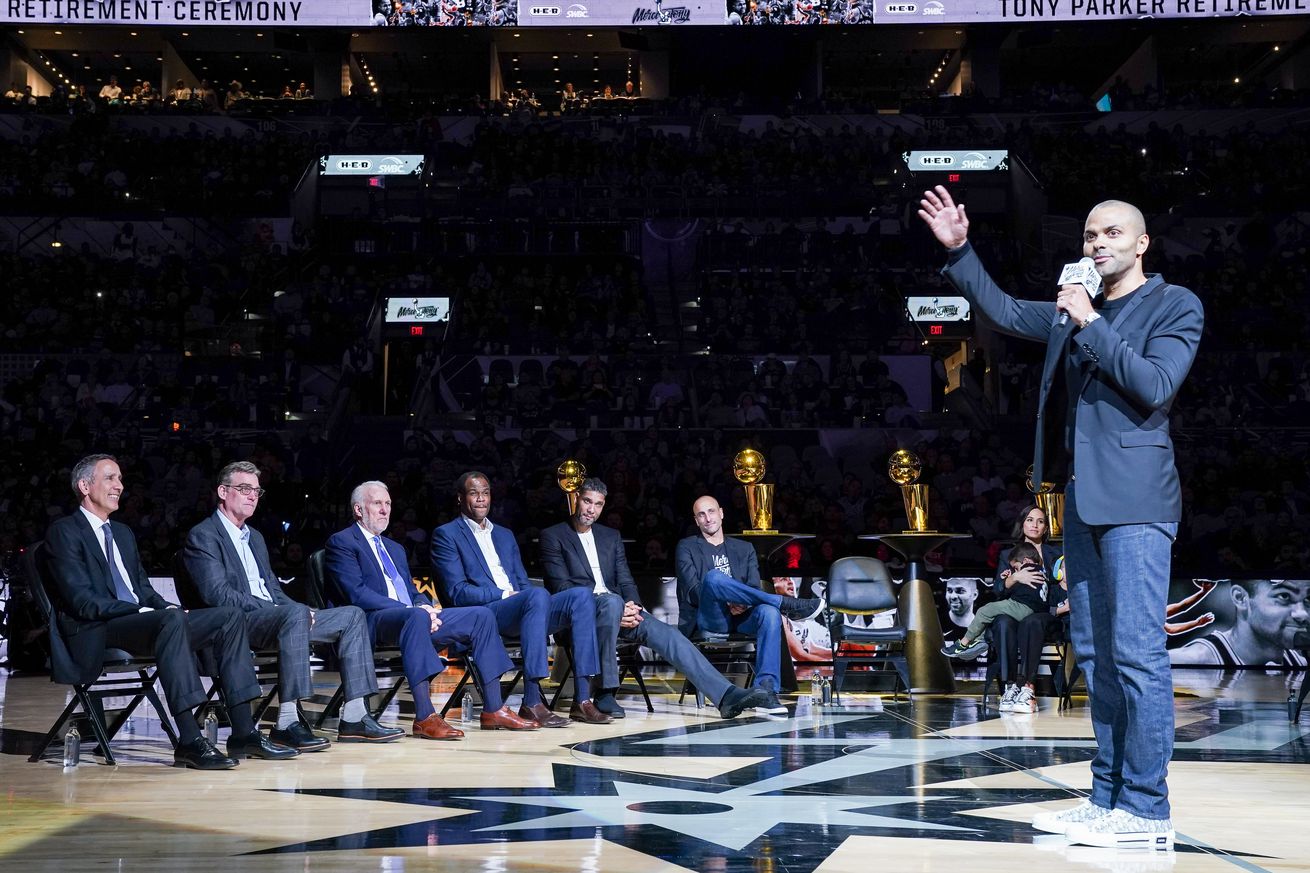 While closing the chapter on the Big Three Era, Monday’s ceremony reminded us that it took fortune, among other things, to help forge the Spurs dynasty.

It’s a funny thing to bask in another person’s self-reflection, to note their reactions as stories of them are recounted and videos of their peak moments are shown and set to music, instances in which they excelled precisely at what they set out to do. In sports these memories do at least residually belong to you, too, having watched and lived them in your own way as younger versions of yourself, but much is not shared: Whereas the athlete knows those achievements, can feel the sense of time and effort they spanned, and is undertaking the personal journey of appreciating them and moving on to a new chapter, the fan experience is tethered to other existential realities, and each of us must conclude as best we can what it means to cement the conclusion of both one great career and the dynasty it helped make up. Every observation is, in its own way, a projection.

This is all to say that Monday’s Tony Parker jersey retirement ceremony felt like the final closing of the chapter on the Big Three Era, a night that warmly peeled back the halcyon years in San Antonio one at a time through Parker’s arc from French phenom to Popovichian project and four-time NBA champion to the veteran who finally passed the torch to another promising young guard. A number of familiar faces, from French teammates like Boris Diaw and Ronny Turiaf to franchise staples like Bruce Bowen and Tiago Splitter came to pay tribute to their peer and one of the greatest winners of his generation.

Between references to Parker’s legacy in his home country, his commitment to his adopted city, and the two-way education between he and Gregg Popovich that made their relationship work, much of the talk ultimately came back to the peerless Big Three, because how could it not. Both Pop and R.C. Buford touched on how special it was to have been able to count on the trio for so many years and the unique alchemy required to make it all work, and Parker, speaking at the end of the night, saved his final comments for both Tim Duncan and Manu Ginobili, appropriately seated next to one another as participants of the third and final installment in a trilogy of heartfelt epilogues.

If fans should use one person’s quotes from Monday as a surrogate for their own feelings, it’s probably Pop, the man who grew and suffered and celebrated with the Big Three and is now making sense of NBA life beyond them:

“I think I’m one of the most fortunate coaches that’s been able to do this because of those three guys,” he said early in the evening. “It’s just remarkable to be able to be with them for that period of time and watch them develop, as people, as players, to see them interact with so many other people, to travel with them 8, 9 months a year. To have that opportunity, it’s priceless; it’s rare, I don’t think a lot of people are going to be able to say that they were with three Hall of Fame players for that long a period of time. Talk about serendipity, good fortune, luck whatever you want to call it. I certainly feel honored and fortunate to have been there.”

Serendipity, a word that Pop used multiple times in his pregame availability, is usually the overlooked element in the Big Three Era, the invisible hand that brought each player to San Antonio at the same time and helped make them work with one another. Ping pong balls won Duncan, the Celtics nearly nabbed Parker, and Ginobili, as Buford reminded reporters on Monday, wasn’t even the first international player the Spurs selected in the 2nd round of the 1999 Draft — and that was before each star made the conscious effort every year to make allowances that benefited the whole. A run like the Big Three had — and the standard they leave behind — doesn’t occur without a slew of things going right, and the Spurs know it. Added Pop:

“Just imagine that they had egos so that they couldn’t deal with each other, you don’t have championships; you have pretty good seasons, less fun — and that wasn’t the case. We were unbelievably fortunate; it was like serendipity to have three guys that you could coach and hold them accountable like they were anyone else on the team. No special treatment or anything like that.”

It’s hard for fans who experienced such generational success to not apply some of that paragon to this and future teams, even with Parker’s number 9 hoisted alongside Ginobili’s and Duncan’s, and the Big Three Era now, definitively, in the past. (The team’s current state, to be sure, was further shaped by the calamitous Kawhi Leonard saga, but calamity itself is liable to occur in the absence of serendipity.)

It may have helped that, in the game that took bottom billing on Monday, there was no Duncan to anchor a defense that allowed 48 points in the paint, no Ginobili to exorcise a moribund half-court offense and no Parker to serve as its metronome. While that trio of greats can now decide how much of their lives will revolve around basketball and do what they wish with the post-retirement resource Diaw spoke most fondly about — time — the Spurs fan experience moves on, both irrespective of time and in the shadow of its history.