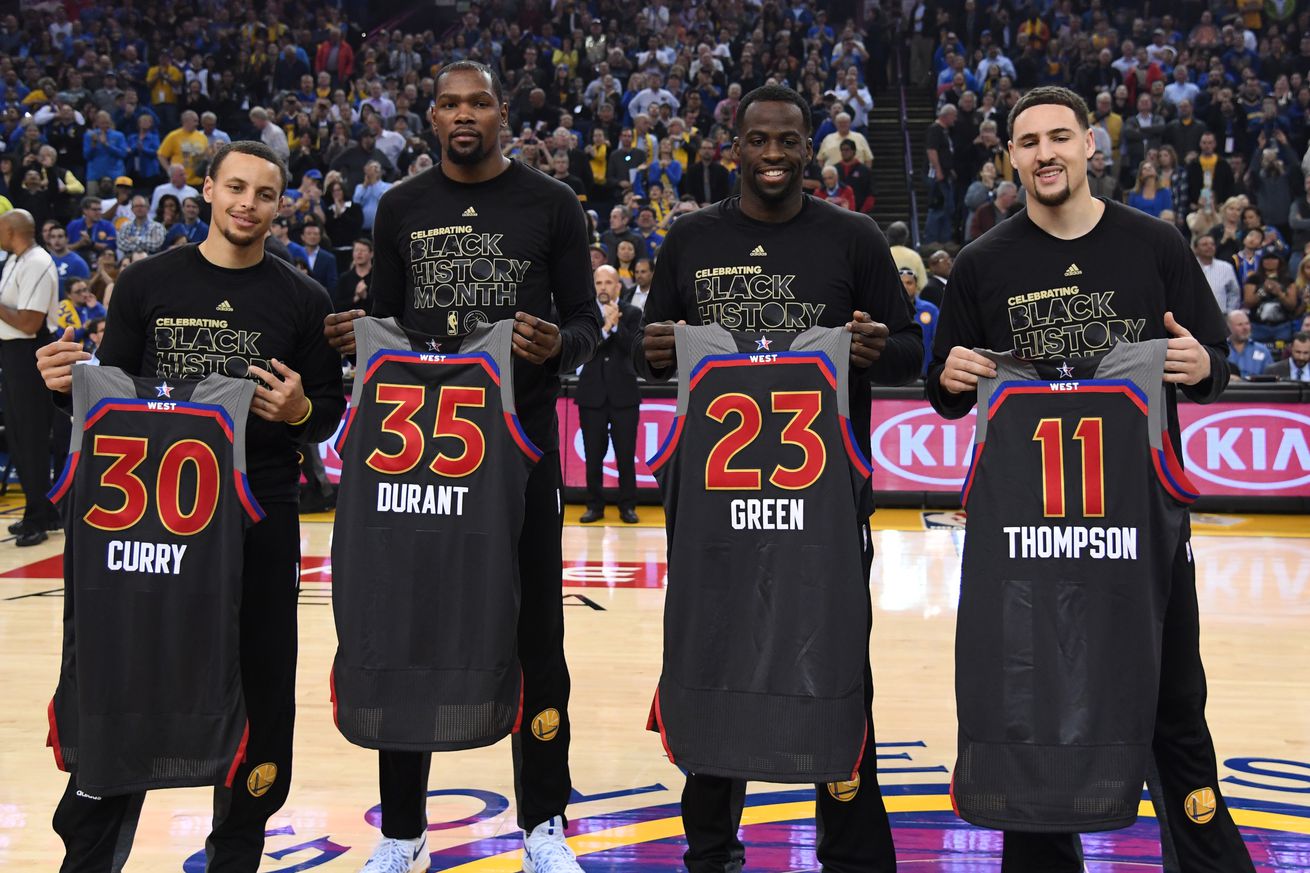 Is a “Fab Four” unprecedented in the NBA? Yes and no.

You ever have one of those days where you just wake up angry? And then you stupidly check social media and it just exacerbates that anger? I mean it’s one thing to be angered by politics, which is my modus operandi these days, so it’s not like I need new things to set me off, but the past 48 hours in sportsworld haven’t been comforting either.

Partly it’s the Giants’ fault. They stink. I suppose I shouldn’t be an ungrateful brat about it, what with the three World Series in five years and all, but man is it no fun to root for a terrible baseball team when they have games practically every single day. It’s not like football, where you just have to get through 16 of those suckers. And I’m a Spurs fan, so I can’t relate to what watching a bad basketball team is like. The last one of those happened 20 years ago and I’m fairly certain something decent came out of it.

Mostly I’m angry at Kevin Durant. He’s ruined the NBA for this season and probably the next five or six. I’ve mentioned it before but think of basketball like chess. Superduperstars like Durant, Stephen Curry, Kawhi Leonard and LeBron James are like queens. So facing the Dubs is like playing a grandmaster like Garry Kasparov or Deep Blue and them replacing three of their pawns with an extra queen (Durant), an extra rook (Draymond Green) and an extra bishop (Klay Thompson). Good luck, man.

I see all these articles analyzing what makes the Warriors so hard to beat, diagramming their rotating defense and their ping-pong-passing offense and it’s like we’ve all collectively lost our ability to see the forest for the threes. It’s Occam’s Razor, folks. They added Kevin Freakin’ Durant, one of the four or five best players in the world, to a 73-win squad. There’s no reason to overthink this. Anyone who didn’t come to the immediate conclusion that they’d be the Death Star was in deep denial.

The thing is, it’s not unprecedented for basketball teams to have four really, really good players and two superduperstars. Hell, the 1963-64 Celtics had eight Hall-of-Famers on their 12-man roster (though the Basketball Hall of Fame will practically let anyone in and a few of those guys were mediocre by modern standards).

I think what’s unique about the Warriors is that all of their stars are in their primes. It’s unprecedented and plainly unfair. Curry is 29-years-old, Durant 28 and both Green and Thompson are 27.

The 1984-85 Lakers had Magic Johnson, James Worthy and Byron Scott, sure. They even had Bob McAdoo, Jamaal Wilkes and Michael Cooper coming off the bench for crying out loud, but Kareem Abdul-Jabbar was 37.

Similarly the 1985-86 Celtics had Dennis Johnson and Robert Parish in their 30’s to support Larry Bird and Kevin McHale.

You could make an argument for the 1995-96 Bulls, if you want to stretch and include Toni Kukoc as their fourth guy, but Dennis Rodman was already 34 by that point and Michael Jordan was 32.

The 2002-03 Spurs were a terrific mix of eras colliding, with David Robinson at the end, Manu Ginobili at the beginning and a 20-year-old Tony Parker in his second season, but only Tim Duncan was in his prime.

The 2003-04 Lakers could’ve been a monster in an alternate universe, but Karl Malone was a ring-chasing 40-year-old, Gary Payton was reduced to a role player at 35 and Shaquille O’Neal and Kobe Bryant were preoccupied with trying to kill one another.

The 2007-08 Celtics were one of the deepest teams of all time, absolutely, but Rajon Rondo was only in his second season that year while their “Big Three” were all in their early 30’s.

Perhaps the closest we’ve come to the Warriors is the 2011-12 Thunder. Oh, what might have been. Durant and Russell Westbrook were 23, while Serge Ibaka and James Harden were 22. One day somebody should write a feature or something about how that squad got broken up. I feel it hasn’t been discussed enough. (Ahem.)

The 2012-13 Heat are up there, sure, but Dwyane Wade was already starting to look creaky at 31 and that dastardly Ray Allen was 37. And even in his prime Allen was never the two-way threat that Thompson is.

Finally we have my favorite challenger on the list, the 2013-14 Spurs. Obviously you know the issues here. Duncan was 37 and Manu Ginobili was 36. It’s arguable whether this was even the best iteration of their four future Hall-of-Famers or whether it was the 2011-12 version. Does Duncan, Ginobili and Tony Parker being closer to their primes offset Kawhi Leonard being only a 20-year-old rookie and guys like Danny Green, Tiago Splitter, Boris Diaw and Patty Mills not being fully integrated into the roles they were growing into? I’d argue it does not. Plus the 2013-14 squad was plainly hungrier, due to the disappointments of the previous years.

So there you have it, scientific proof for why I hate the Warriors and you should too. Feel better now?