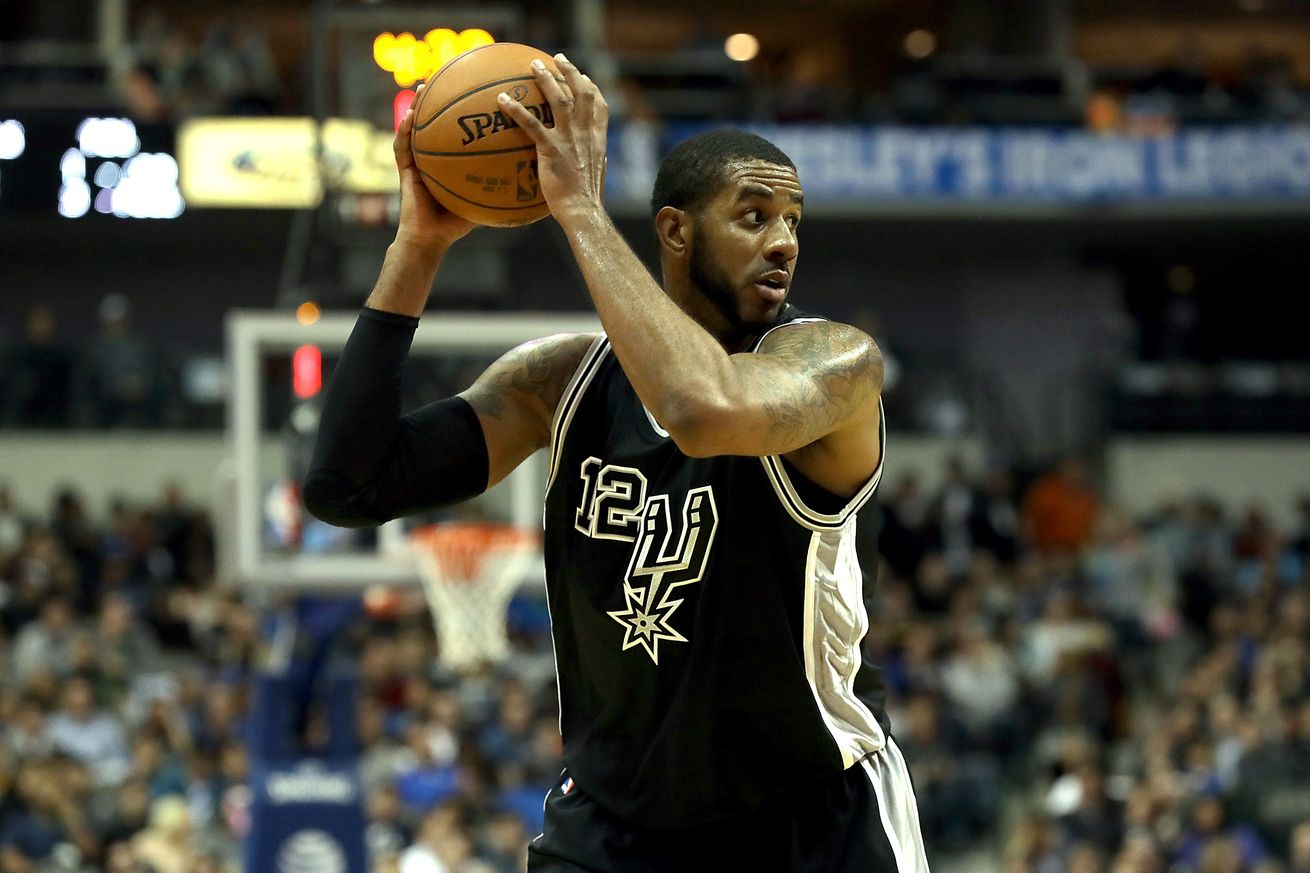 Now that it’s gone, it’s time to examine what the billboard meant (and means) to a franchise on the brink of transition.

“Life starts all over again when it gets crisp in the fall.”
-F. Scott Fitzgerald, The Great Gatsby

It appeared in early autumn, when the evenings begin to regain their footing and the South Texas sun stubbornly fights for application against now abbreviated days. There were no identifying features to tie it to an individual or organization, save for the back of the embattled basketball star’s jersey that displayed his last name and number. LaMarcus Aldridge, enigmatic and beaten-down, bearer of the burden that he isn’t Tim Duncan when so many thousands of San Antonians desperately want him to be, rose above the city in a striking black rectangle.

The billboard mysteriously appeared before the San Antonio Spurs began their 2017–2018 season. And then, days after the team’s opening round playoff loss to the Golden State Warriors earlier this spring, the billboard was just as quickly gone. The Spurs claimed no involvement in its purchase and no one has yet come forward to claim responsibility. Aldridge himself denied any knowledge of the billboard’s origin, but expressed gratitude for its placement. “I’ve seen it, but I don’t know where it came from,” Aldridge said before a preseason game in October. “I appreciate it, especially after the summer with everything that was going around. So, I’m thankful for whoever done it. I want to say thank you because I actually like it.”

Beyond its Gatsby-like mystery, the billboard is unique for the underlying message the sign conveys. San Antonio residents questioned its purpose throughout the season. Is Aldridge leaving or staying — is he happy or not? What the hell does that billboard mean?

The picture is not of Aldridge’s face, but of his back. And the sign’s strategic placement on westbound I-10, just after the Loop 410 interchange, makes it most visible to the sparkling white F-250’s and black BMW’s and yellow and red Ferraris and silver Land Rovers and gold Mercedes fleeing the grit and grime of the city and out toward the glorious Texas Hill Country; out to the affluent suburbs of Boerne and Kerrville; out to the terra cotta and ornate iron gated communities of The Dominion and Terra Mont and Cordillera Ranch.

It’s as if Aldridge is watching them all leave with a smirk — watching the affluent flee to West Egg; watching them escape to their new money estates and away from the arguments and uncertainty burning in the city.

“A phrase began to beat in my ears with a sort of heady excitement: There are only the pursued, the pursuing, the busy and the tired.”

And so, with our new billboard watching carefully over us, peculiar days in San Antonio began to unfold. By now, most are familiar with the year-long saga surrounding Kawhi Leonard and his strange detachment from the team. It’s a modern-day tragedy in the most literary sense of the word. Has there ever been a more perfect match between player and team? On one side is the world’s most reclusive superstar, hell-bent on becoming the most efficiently dominant player in the NBA. On the other is a franchise renowned for its able approach, its consistent excellence and its propensity to never say a damn thing.

Most importantly, though, has been the Spurs’ willingness to position Leonard as the face of the franchise in the imminent post-Tim/Manu/Tony era without requiring him to ever say a word. Kawhi Leonard seems to be a man yearning to be left alone and San Antonio is the rare city that will accommodate. Tim Duncan wanders around Old Navy’s and CVS’s in town and everyone leaves him alone. I’ve witnessed it firsthand. It’s an uncommon agreement in a city as large as ours: Give us everything you’ve got on the court and we’ll let you live a normal life here with us.

Yet as fans here we are, in this weird state of limbo, two hundred million dollars sitting on the table coupled with the rare promise of professional isolation and we’re still not sure if the man — the man who so many in this city have lashed their hopes and dreams to — even wants the money, or even wants to be here.

Like battered cases of water doled out in disaster ravaged areas, tidbits and hints of Leonard’s intentions from his camp have been ferociously consumed by thirsty fans. Kawhi said “yeah for sure!” when asked if he wanted to stay in San Antonio!,” we heard somewhere.

The city longs for concrete reassurance but never gets more than second-hand words. Kawhi Leonard, through his performance, has earned unlimited agency here. The Spurs, because of the franchise’s history, deserves better than social media reassurances of his commitment to them from his sister.

“You see I usually find myself among strangers because I drift here and there trying to forget the sad things that happened to me.”

LaMarcus Aldridge and Kawhi Leonard are allied in this Fitzgeraldian tragedy as well. Aldridge famously struggled in 2016–2017, particularly in the playoffs. He lost support across the city as a result. It didn’t help that Leonard had an MVP-caliber season and his absence after injury in Game 1 of the Western Conference Finals against the Warriors was glaring. The Spurs and Aldridge wilted under the onslaught from Kevin Durant and his new friends. So, Aldridge’s reemergence this season was bittersweet. He showed why Gregg Popovich and Tim Duncan recruited him so heavily in the summer of 2015 as he carried a bad team — notoriously without Leonard — to the playoffs.

So with Leonard’s dominance last season seemingly at the expense of Aldridge, and Aldridge’s return to form this year sans Leonard, it appears that the two players would be better off if separated. But it was Leonard who told Popovich last summer, as a connected person recently revealed to me, that he wanted Aldridge to stay in San Antonio. And as you can imagine, with that kind of directive from one not inclined to direct, it became incumbent upon Popovich to change how he coached the fickle big man. He went to Aldridge last summer, hat in hand, and promised a new approach.

Our innate desire for material things; our longing for a grand estate in West Egg; our dreams of a cottage next to Tim Duncan’s manor in The Hermitage and our unquenchable thirst for more, for more, for more, might not be the top priority for Kawhi Leonard when all is said and done. And for us, the children of a hard-charging Jay Gatsby — where life is defined by how many more square feet we have than our neighbors — that particular mindset is difficult to comprehend. Leonard’s hesitance to cash in on unimaginable riches and stay here forever is just so damn hard for us to understand.

“Can’t repeat the past?” he cried incredulously. “Why of course you can! He looked around him wildly, as if the past were lurking here in the shadow of his house, just out of reach of his hand.”

Despite its storied history, San Antonio is an unfinished city. There is rawness here, an unrefined nascence rare in cities so old. Austin is 70 miles north of San Antonio, yet a world apart it its development. The skylines of Dallas and Houston dwarf that of San Antonio’s. But there is a sense of order here — a routine and expectation of events that we find comfort in. Dia de los Muertos is at the end of October, Fiesta is in April and the Spurs play basketball — and play it well — in all the months in between.

Babies were born, raised and graduated from high school while Tim Duncan was a Spur. So while unrefined, we rely on a sense of certainty to get us through; we look to the past to tell us where our futures lie. But things are different now. For the first time in decades, things are uncertain here.

“He snatched out his hand desperately as if to snatch only a wisp of air, to save a fragment of the spot that she had made lovely for him. But it was all going by too fast now for his burred eyes and he knew that he had lost that part of it, the freshest and the best, forever.”

In April, in the middle of the Spurs’ first-round playoff series against Golden State, basketball stopped for a moment in San Antonio and around the NBA world. Gregg Popovich’s wife, Erin, died after a lengthy battle with a respiratory illness. Her death shifted emotion in the city for a brief period of time to something more meaningful and reflective. The outpouring of sadness for Coach Popovich and his family was heartfelt and wrenching. A few days ago a photo circulated on social media of a fan and Coach Popovich — complete with his signature (albeit slight) smirk. It was reassuring and familiar, a glimpse of the old routine and order we took for granted for so long. We ache for him to be ok.

And now San Antonio begins lumbering into another long, relentless summer; a time of sun-drenched days and newfound, unfamiliar uncertainty. Maybe Kawhi Leonard has played his last game as a Spur. Maybe Tony Parker and Manu Ginobili have too. And who could blame Gregg Popovich if he left the Spurs and left town and started a small yet efficient winery?

Or maybe one, or maybe two, or maybe any combination of the uncertain men above that have defined the Spurs for so long will decide to come back. Maybe Kawhi will sign the Super-Max deal on the table and have his jersey hanging in the AT&T Center rafters years from now.

But during this year, during these peculiar days, perhaps we’ve learned to look less to the past and instead look ahead to whatever the future might bring, however uncertain and uncomfortable that might be.

Maybe we can take comfort knowing there is always a beginning, and then an ending, and then a beginning again. That future is there for us if we run faster toward it. And, after all this, maybe life will start again when it gets crisp in the fall.

“Gatsby believed in the green light, the orgastic future that year by year recedes before us. It eluded us then, but that’s no matter — tomorrow we will run faster, stretch out our arms farther…. And one fine morning — So we beat on, boats against the current, borne back ceaselessly into the past.”

A version of this article originally appeared in The Medium