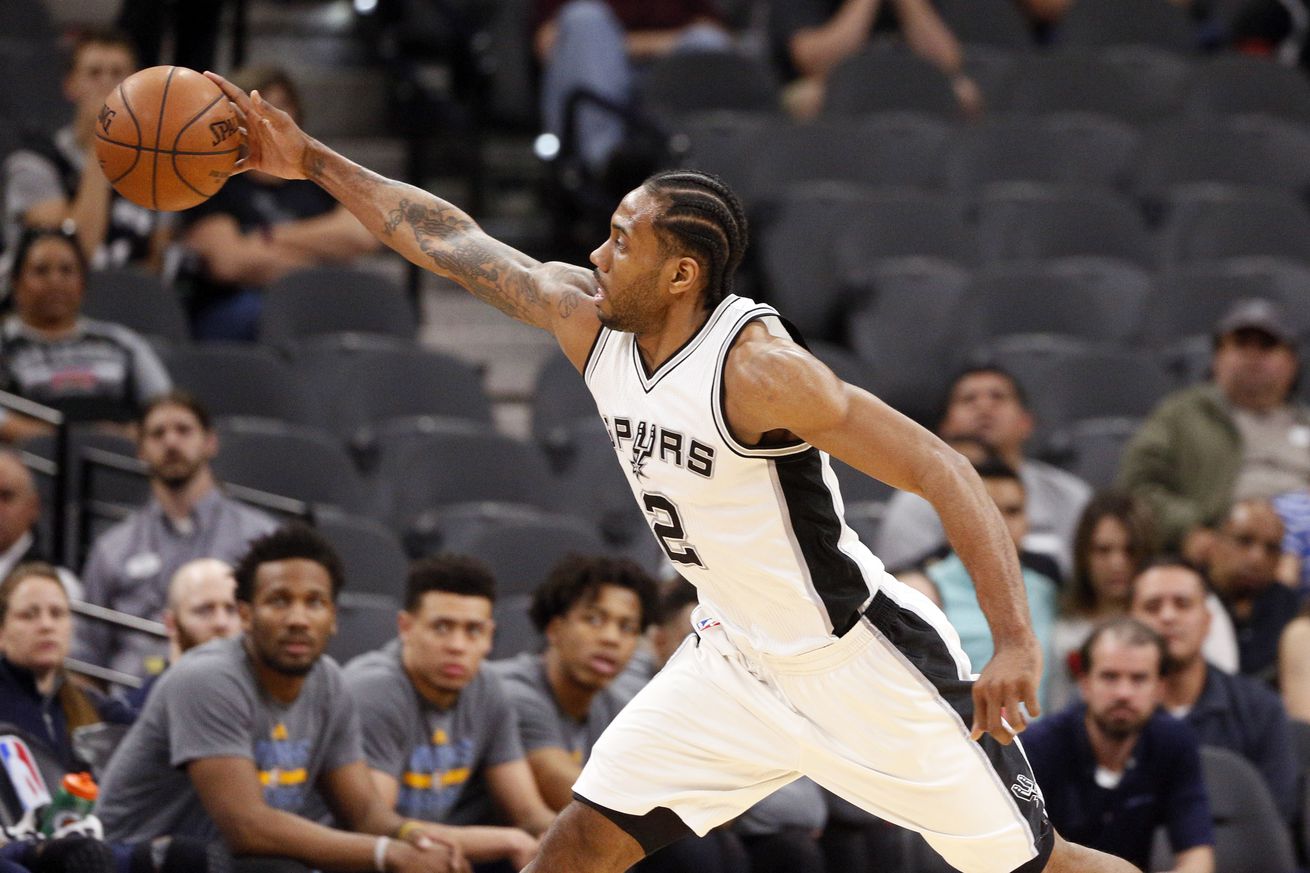 Jonathan Abrams of Bleacher Report Mag wrote an excellent piece on how Kawhi Leonard went from an introverted high school basketball player to the NBA superstar and MVP candidate he is today through they eyes of his coaches and teammates at all levels. There’s some stuff you may already know, and other things that might be new…like how he initially failed to impress his teammates during lockout training sessions in 2011. It’s a fascinating read, and I encourage everyone to partake.

Also, it might contain one my favorite Gregg Popovich quotes of all time:

“I think the most important thing is I let him be who he is. I think it’s wasted effort to try to change somebody. If you said try and make Manu Ginobili non-competitive, well, you’re not going to do it. If somebody’s quiet, that’s what they’re going to be. You’re not going to make Avery Johnson quiet.”

I laughed at that last part. Truer words were never spoken.

So you’re saying there’s a chance?

Odds are if you’ve read much into the league’s MVP race lately, the impression has mostly been that it is down to either James Harden or Russell Westbrook, and with good reason. Both are putting up eye-popping numbers and leading their teams on runs far exceeding preseason expectations. Still, that doesn’t mean there aren’t any other deserving candidates. NBA.com took a look at Leonard’s case for MVP.

60 wins (and counting): defying all odds

How do they keep doing it? How has a Spurs team that just lost it’s franchise cornerstone…let alone hasn’t had a draft pick inside the top 20 in twenty years and isn’t a top free agent destination…win 60 games for the sixth time (and second time in a row) in that same time span? Jared Johnson of FanRag Sports Network has you covered.

ESPN’s Kevin Pelton created a list of who he would pick to make NBA’s All-Defense first and second teams at each position. You will need ESPN Insider to see the entire list, but here are the Spurs who received some love:

Leonard’s defense hasn’t been up to his DPOY standard over the full course of the 2016-17 season, but in crunch time there’s nobody you’d rather have matched up with the league’s top scorers. As ESPN’s Tom Haberstroh recently explored, Leonard seems to be able to rip the ball away from opposing players at will.

And pay no mind to his middling defensive RPM, which is partially a product of opponent shooting that is largely out of Leonard’s control.

Overshadowed by playing alongside two-time Defensive Player of the Year Kawhi Leonard, Green is an outstanding defender in his own right who uses long arms to hamper the vision of smaller opponents. Like Andre Roberson, Green is a fine shot blocker with a unique knack for stopping multiple players as the lone man back on a fast break.

The Spurs’ defense hasn’t missed a beat without the retired Tim Duncan, and the infusion of athleticism Dedmon has provided in the paint has been a key.

Bonus: Who are the NBA’s “real” tough guys?

The Ringer asked rapper Vince Staples and comedian Hannibal Buress to assist in helping them tell the difference between the NBA’s real and fake tough guys. A couple of Spurs, current and former, get a mention, and let’s just say they have an interesting take on how much the city of San Antonio loves its players. It’s pretty hilarious.

Have a good day!