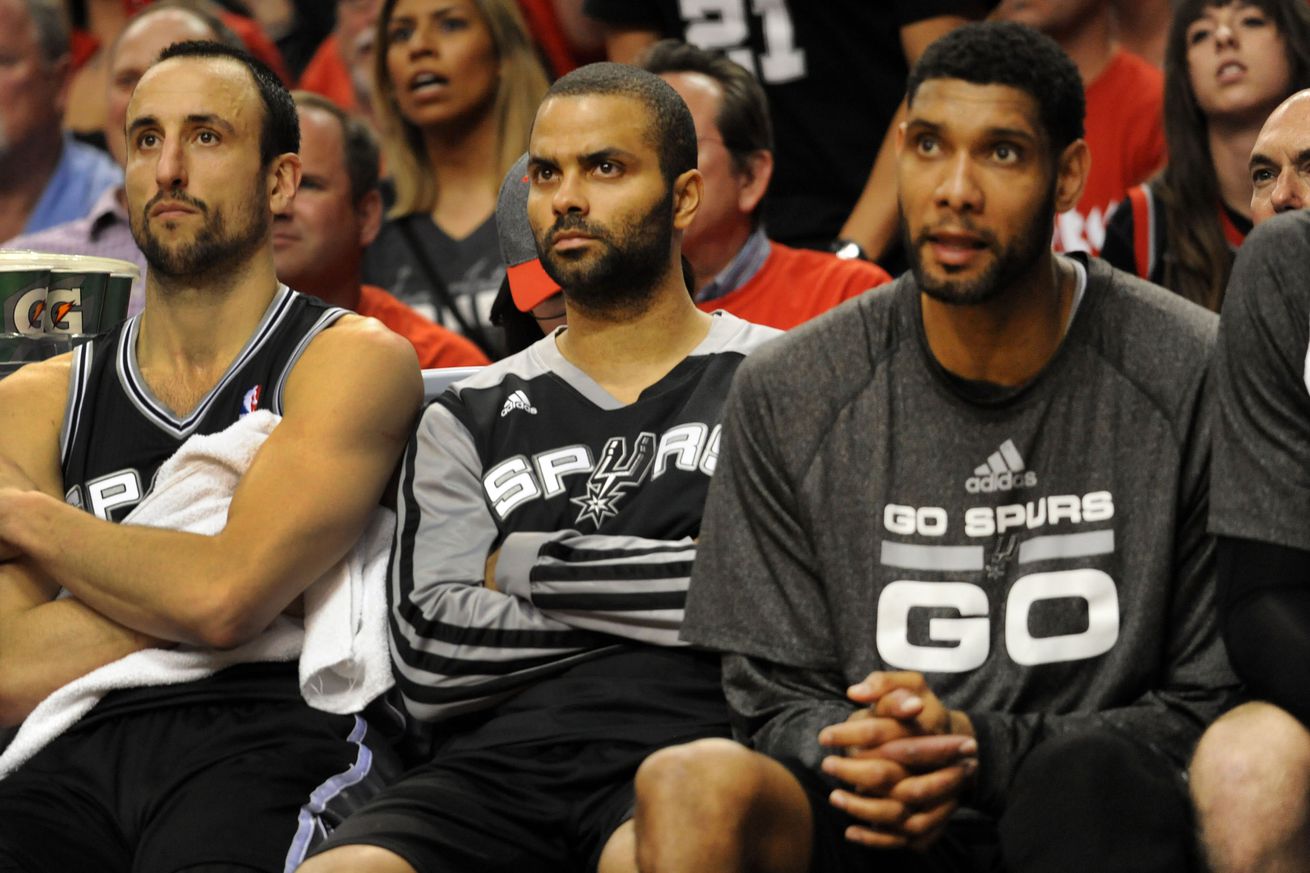 If you followed the Spurs for much of Tim Duncan’s career, you’re probably aware that he’s been into Dungeons and Dragons since almost forever. What you certainly didn’t know (since it’s completely made up) is that just after the regular season, he got Manu Ginobili, Tony Parker, Kawhi Leonard and LaMarcus Aldridge together for their first foray into the world of magic and quests, dragons and treasure.

The following transcript was obtained in an entirely legitimate way (he made it up), and begins after Tim has put his kids down for the night, and all of the guys have gathered in his living room to begin.

TIM: Alright, let’s get started. Thanks to all of you for joining me on this adventure; I’ve worked really hard on this campaign and I think we’re going to have a lot of fun. And if I remember correctly, this is all your first time playing Dungeons and Dragons?

TIM: [chuckles] Boy, you guys are in for a treat. So this morning I took the liberty of throwing together character sheets for each of you based on the info you gave me, so we could jump right into the game. Did everyone have a chance to look yours over?

LAMARCUS: I didn’t get mine.

TIM: Okay, no problem. I brought an extra. In fact, here’s an extra for everybody. Now, how about we start by going around the table and introduce yourself in character?

MANU: I’ll go first! And Timmy, thanks for letting me give input on this. I love my character already. I should start by saying that mine was inspired by a real Argentinian folk hero–

MANU: Right, right. [Affects an exaggerated accent] Hallo. My name is Juan Moreira, and I am a Wood Elf and a Fighter. When I was a child, I was swept up into a world of–

TIM: Actually, let’s hold off on the backstory for now. We got a lot of game to get through, so let’s see if it comes up organically. Tony?

TONY: Um…okay, it looks like I’m a…Wizard…and…a Halfling? What does that mean?

TONY: What does that mean?

TONY: And what’s that?

TONY: Okay, I’m a wizard halfling, and my name is…Souffle.

[Manu and Tim burst out laughing.]

LAMARCUS: This is weird.

TONY: You said you would give me a cool name! That’s what you said!

LAMARCUS: Hey, what does “Dragonborn” mean?

TIM: It means you have dragon DNA. Man-shaped, but scaly.

MANU: You’re good with nature and can do healing spells and stuff.

TIM: And you didn’t give me a name either, so I just picked one out of Nessa’s book.

LAMARCUS: So my dragon’s name is Brian.

TIM: Your name is Brian.

LAMARCUS: Can I change it?

TIM: Nope, we’re moving on. Okay Kawhi, tell us about your character.

TONY: But what about your D&D character?

TIM: Okay, I think that’s enough for the moment. Do you need a refresher on how this all works with the dice and stuff, or just want to figure it out as we go?

TIM: So the four of you are relaxing in your local inn, let’s call it the Old Coyote…just chatting, you know.

MANU: What are we drinking?

TIM: Okay, all of that. So you’re drinking and you hear this voice bellowing in the corner. You turn and see this old warlock, holding court….hang on. Oh, I got it. [He begins to impersonate Bernie Sanders.] “The legends are real! I’ve seen it! The Champion’s Ring! Oooh, but they’ve got it locked away — I don’t know where!”

TONY: A little on the nose, isn’t it?

TIM: Is this in character, or out of character?

TIM: So the warlock turns towards your table and sees you all staring. “You there! The elf, man, halfling, and the dragon that’s way too big for his chair! Come over here!”

MANU: We go over!

LAMARCUS: Hang on, how does this work?

TONY: Fine, we all go over.

TIM/WARLOCK: “My name is Poppo, and you four look like you could use a quest!”

TIM/POPPO: “Well, it’s a very simple quest. You ever hear of the Champion’s Ring?”

TIM/POPPO: “Oh, so you know it gives you magical powers? The strength of 13 men, and riches and glory!”

TIM/POPPO: “Well, I’ve come into a little information, but I can’t act on it on my own. I need some young bucks like yourselves to do it for me.”

TONY/SOUFFLE: That’s the first time in a while anyone has called us young.

TIM/POPPO: “Let me get to the point. There’s a map to where to find the Champion’s Ring, but it’s been torn into three pieces. I know where to find the first. Go retrieve that piece, and I bet the five of us can figure out where to get the rest.”

LAMARCUS/BRIAN: I feel like I don’t have a choice.

TIM/POPPO: “And how about you, young man? You haven’t said a word yet.”

[A pregnant pause. The group looks at Kawhi expectantly.]

TIM/POPPO: “Excellent! Now, about that map–”

KAWHI: Are we ever going to do anything, or is Dungeons and Dragons just about listening to you talk?

TIM: Well, this is all just the introduction. We’ve got to set up the story somehow.

LAMARCUS: Look, I’ve got plans later tonight…can we move this along?

TIM: Okay, okay. Fine. So you accept the quest, yes? Do you want Poppo to tell you where to go, or do you think you can DM better than I can?

TIM/POPPO: “Glad you asked! It’s in the cave on the other side of the ridge.”

TONY: So do we just walk over there, or–

TIM: You walk over there. You’ve walked over. Let’s say you did.

MANU/JUAN: Now, let’s not rush this. We should get to know each other a little bit! We’re going on a magical adventure! Did I ever tell you about the day I challenged my village elder to com–

LAMARCUS: Why did I agree to this?

TIM: So the four of you have made it to this cave. Big surprise, it’s blocked.

TIM: In front of you, there’s a cascade of boulders. Huge boulders, larger than any ordinary man could lift. But there’s enough of them that it would still take you guys hours.

TIM: Okay Juan, with your good, good elf eyes, you see that there’s something not quite right about this pile o’boulders. It’s almost like they’re covering more than a simple cave opening. In fact, because your eyes are SO good, you can see the faint outline of a trail, like a residue, leading into the pile from an off angle.

TIM: You pick your way through the pile and see the outline of a large rectangular object, but you can’t get a better look at it until you move some of the boulders.

LAMARCUS: What am I supposed to do?

TIM: Well as a Dragonborn, you’ve got the highest strength of the group. You could do a check against the boulder in front of the object.

LAMARCUS: And how do I do that?

TIM: Roll a D20 and add your modifier.

LAMARCUS: Man, I have no idea what this is.

LAMARCUS: Did I do it wrong?

LAMARCUS: I don’t get this game at all.

MANU: Is there a heavy stick or something we could use as a lever?

TONY: Can’t Brian just try it again? Or can we do it together?

TIM: In the interest of moving things along, because I did NOT expect Brian to fail at lifting a single boulder—

LAMARCUS: Thanks a lot.

TIM: Sure, you can all get around and do it together. It’s a formality, but everybody roll.

TIM: See, I’m not even going to count. I can just look at it and I know. So the four of you get in a circle around this rock, it’s very adorable–

TIM: And lo and behold, you lift it, and underneath it is what looks like an old mall kiosk. But it’s not a kiosk, of course. There’s not like a screen, but there is a keypad. A standard keypad in Common, so you can all make it out.

TONY/SOUFFLE: What kind of fantasy world is this?

MANU/JUAN: Wait, I’ve got it. Kawhi, your turn. Can you use your thief’s tools on this?

TIM: Ah, I’ll point out that there’s nothing to “break into,” per se, but if Kawhi wants to roll for…um…Insight? Perception? Yeah, Perception.

TIM: You see clear smudges on some of the letters. A, D, and T.

MANU/JUAN: It could be an acronym.

KAWHI: I…push those keys. In that order.

TIM: Well guess what, there’s a low rumble that steadily gets louder, and a gateway opens at the base of the mountain.

TIM: After a few moments it stops, and you’re left with a yawning, black, cave entrance. You solved my Kiosk Puzzle!

LAMARCUS/BRIAN: Glad I could help.