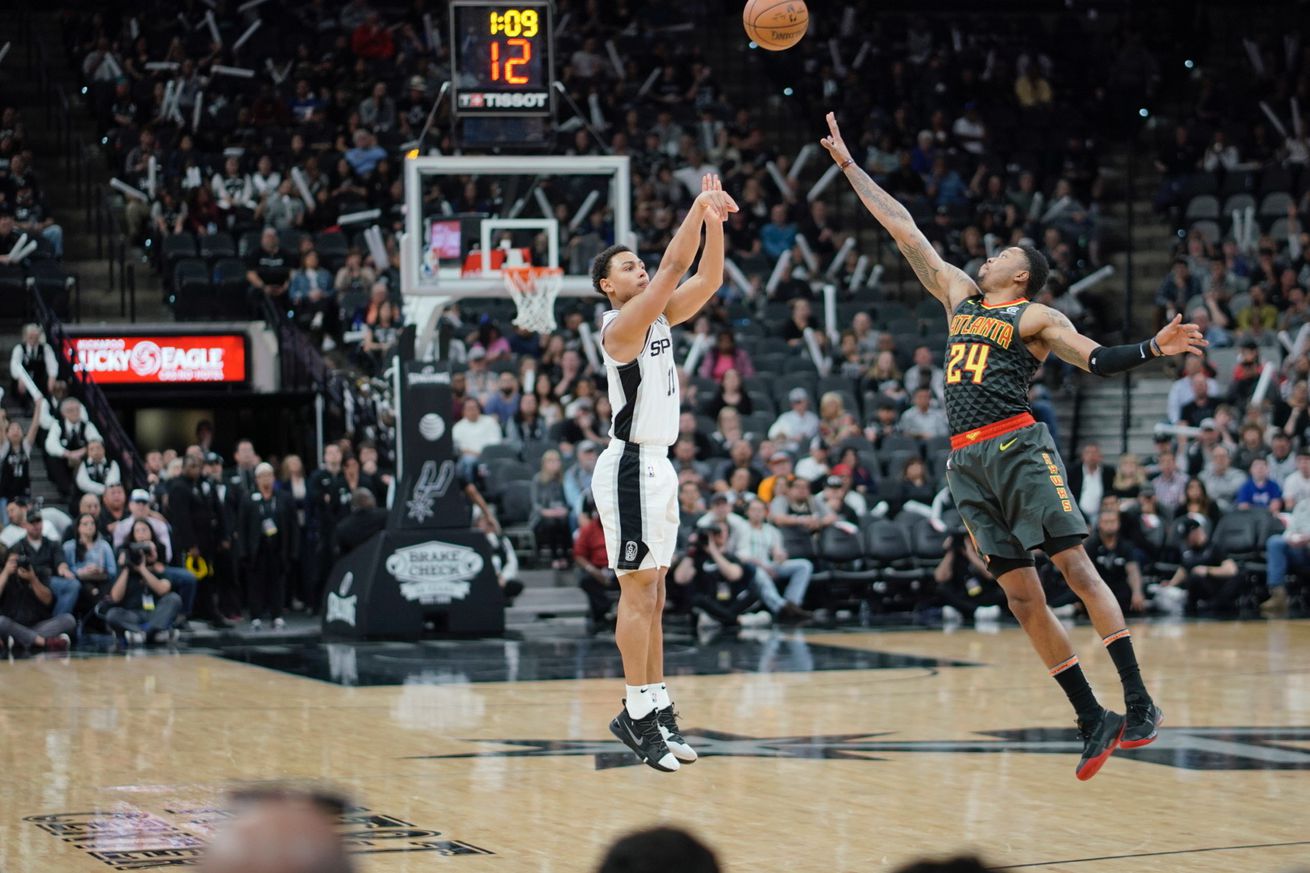 With DeRozan fouled out, every had to step up to the plate.

With just over a minute to go in their Tuesday night victory over the Hawks, the Spurs unleashed a beautiful bit of misdirection to spring Bryn Forbes for a three that all but sealed the game.

DeMar DeRozan had just fouled out, sending Vince Carter to the free throw line. In between his free throws, Patty Mills passed out the play.

When Patty’s this secretive, something’s up. In this case, it was a clever reversal that sprang the Spurs’ 2nd best three point shooter for an open look.

The play starts, like many Spurs’ possessions do, with the ball handler passing to a big at the top of the key, who then pivots into a dribble hand off with a wing on the opposite side of the floor. While that’s happening, Bryn Forbes trails Derrick White over to right side of the key.

What’s interesting is that it appears Derrick is filling DeMar’s role in the play. This looks like a setup for a wing post up.

The backscreen that Bryn is setting for Derrick would allow DeMar, typically, to either seal his defender in the paint or establish good position on the left block, one of his preferred spots, against a smaller player. Marco Belinelli’s job, in that case, would be to look for an immediate entry if he’s uncovered, hit the high-low if he’s able to seal, or throw it to Patty on the left wing if it becomes a post up.

Derrick’s not exactly a post up threat — per NBA stats, he’s scored exactly 0 points on 2 post ups this season — but the Hawks overreaction to his sudden change of direction isn’t completely inexplicable. He was on quite a run at this point in the game, having scored 9 points over the previous 4 minutes without missing a shot. With DeMar on the bench, it was reasonable to expect Derrick to pick up the slack.

When Derrick turns to head back to the left side of the floor, Justin Anderson immediately switches on to him, preventing the easy layup, but Kent Bazemore fights through Bryn’s screen trying to get back to Derrick, too. That momentary lapse puts him well behind the play, and on the wrong side of a LaMarcus Aldridge screen. For his part, LaMarcus’ footwork is excellent. He very deftly avoids tripping Bryn before getting set up in Bazemore’s path.

Bazemore does well using his length to contest without fouling, but it doesn’t bother Bryn enough to affect the shot, giving the Spurs a 6 points lead with 1:07 to go, which was enough to secure the victory.

Unfortunately, if the Spurs’ recent history is any indication, they’re gonna need one of these every night.