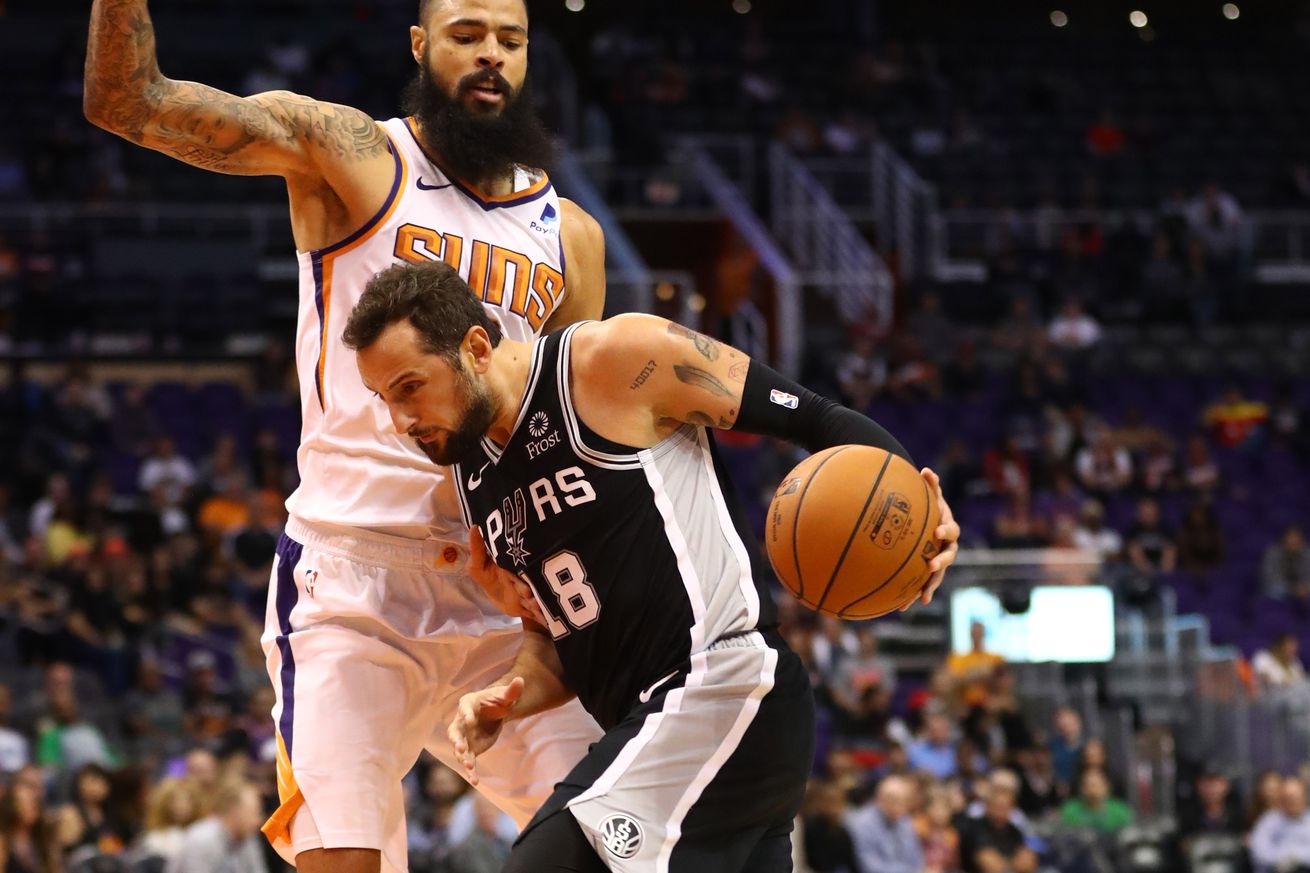 I promise you: I don’t go into each game looking for a Marco Belinelli play to break down. I don’t have any financial interest in his popularity, and we’re not related. It just works out this way. I don’t know what to tell you, other than that he makes great basketball plays, and the more I watch him, the more I wish he’d never left.

Last night, with 2 minutes left in the 1st quarter, before the game got out of hand, Marco and Pau Gasol cooperated to manufacture another open layup out of thin air.

This possession begins with the Spurs quickly getting organized out of semi-transition, starting with good floor spacing. Their two best shooters on the court, Marco and Davis Bertans, are on the weak side moving to the wing and the far corner. Pau and Quincy Pondexter are trailing the play and Pau’s already setting up for a pick on Patty’s man.

Because the Spurs pushed the ball up the court — there’s still 21 on the shot clock and Patty’ Mills already has the ball across half court — the Suns are a little cross-matched. Mikal Bridges, who had been guarding Marco, is on Patty, and De’Anthony Melton is picking up Marco instead. Patty does just enough probing as he makes his way over the two screens to scramble the defense a little more, generating a switch between Bridges and Trevor Ariza, who was on Quincy.

The quick swing to Quincy, then to Pau, puts three shooters on the weak side of the play, with only Ryan Anderson matched up with the right man. As soon as the ball’s in the air, Patty, Davis, and Marco begin their three card monte shuffling act, and once Quincy gets rid of it, he joins in, too.

Quincy’s this-a-way-and-that-a-way cut through the middle, combined with Patty’s fade to the wing and Marco coming across the top, causes Ariza and Melton to collide. Ariza’s unintentional screen makes Melton late to Marco on the catch, a situation Marco exploits with a shot fake. Melton leaves his feet to contest, giving Marco the room he needs to get a better shot.

With Melton on his hip, and Deandre Ayton recovering to Pau, Marco starts the give and go. He tosses it to Pau, then cuts to the rim. Pau does a nice job of creating an angle for the pass, and as was the case for most of the night, nobody on the Suns was interested in rotating over to help.

It’s difficult to take too much away from a game like this. The Suns are a lottery team when healthy, and were missing their best player. Still, taking care of business against teams that are struggling is a hallmark of this franchise, and getting easy points is the best way to do that.