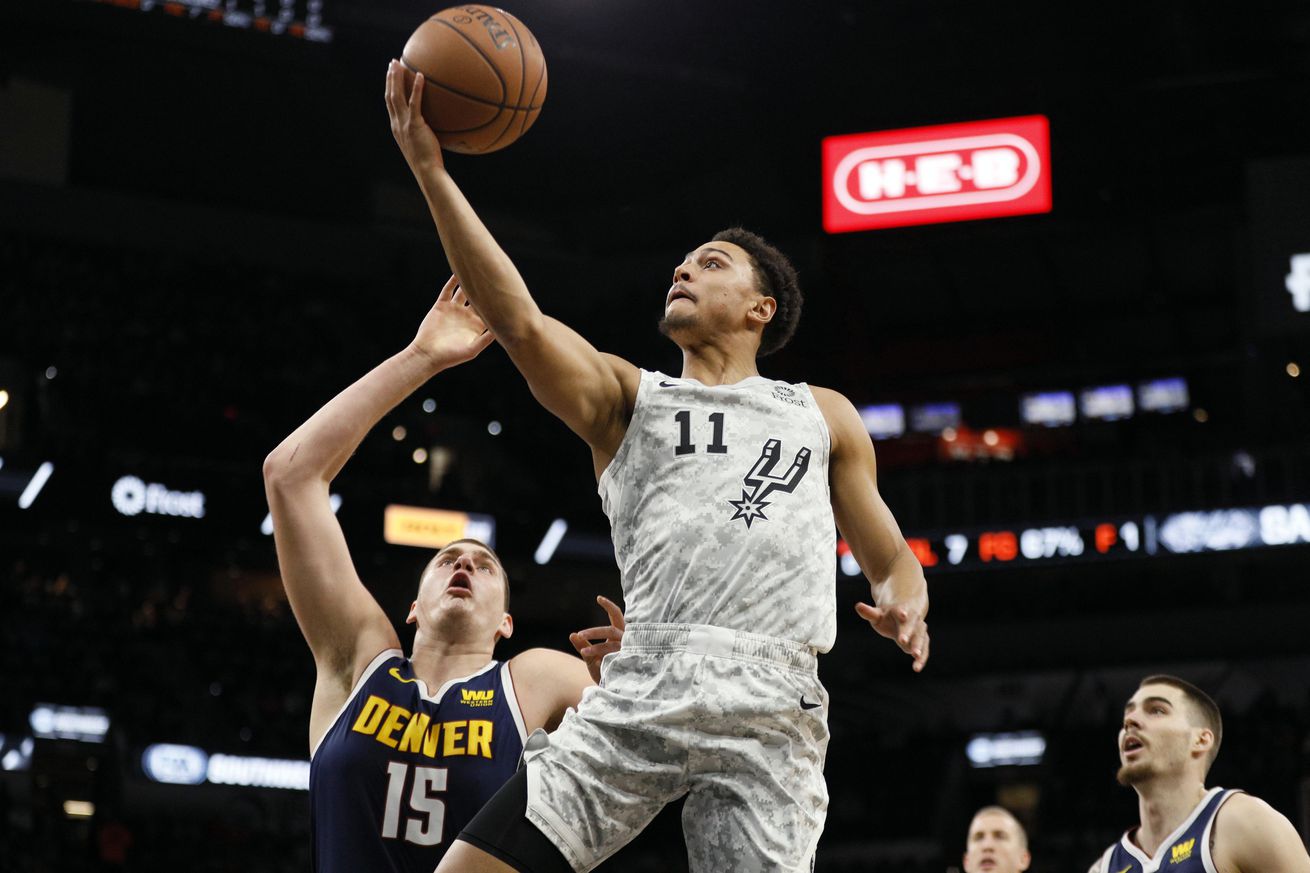 The Spurs added another solid win to their portfolio on Wednesday night against the Nuggets. Though neither team is at full strength, with the Nuggets missing 3 players from their starting lineup on opening day, both have been playing good basketball of late. The Nuggets entered the game with 4-2 record since losing Paul Millsap in a loss to the Hornets on December 7th. Over that time they’ve beat the Grizzlies, Thunder, Raptors, and Mavericks, with their only losses coming to the Hawks on the 2nd half of a road SEGABABA and to the Clippers in a game where the Nuggets shot 29% from three.

Neither of those issues were present tonight, as the Nuggets, like the Spurs, had 3 full days off before this game, and they sank 45% of their 40 attempts from three. Teams that have made that many threes in a game are now 34-17 on the season. The Spurs nearly kept pace in terms of attempts, taking 32, which is tied for their 3rd most of the season, but couldn’t match the Nuggets’ accuracy. The good guys only hit 10, putting them at quite the deficit from long distance.

They made up for it in several ways. As usual, the Spurs won the turnover battle (and that’s despite a horrible stretch in the second quarter), giving up only 10 while generating 13, and took advantage of the charity stripe, scoring 17 free points to Denver’s 15, despite taking one less free throw. In a much more surprising development, they also got out into transition more, scoring the same number of points off fast breaks as the Nuggets — a team that typically wins that category.

It started early, with Derrick White grabbing a rebound to begin the Spurs’ fourth offensive possession and hitting Bryn Forbes streaking down the left side for a layup.

Then, after ever-so-briefly falling behind by 5, the Spurs bookended a DeMar DeRozan pull-up jumper with good defense and two more quick scores. With just over 5 minutes to go in the quarter, after a made bucket this time, Forbes did the thing where he beat everybody down the court again.

And just a minute later, Patty Mills grabbed another rebound and took off, simultaneously surveying the scene and preparing to direct traffic.

Davis Bertans is confused about his role as he runs down the court. He appears undecided whether to dive to the basket or hold up at the arc. With Bryn slightly behind him Davis holds up slightly for some reason, like he thinks Bryn is going to run by him down the sideline. Patty’s got it figured out, though, and with some emphatic encouragement, gets Davis down to the corner.

Once there’s space between Davis and Bryn, Patty is able to read the defense, and sees Monte Morris has retreated below the three-point line, so he tosses it to Bryn on the right wing. That forces Morris to recover out to the arc, leaving nobody in position to defend Davis in the corner. Bryn quickly redirects the ball his way, and though Malik Beasley tries to close out, Davis is 6’10” and Beasley’s outstretched hand barely registers as the Latvian Laser splashes another one from deep.

Davis needs to have this ingrained in his head. There shouldn’t be a need for directing traffic on this play. Patty already has a big on his left side and were he inclined to do so, could have easily treated this as a two-on-one with he and LaMarcus Aldridge vs Beasley. If Patty continues down the right side of the lane, there’s a path for LaMarcus to the basket, and this could also have been a dunk (ok, probably a layup, if we’re being honest).

But Patty made the right decision here. An open three for Davis is as close to automatic as any shot in the league right now. He’s shooting 59% from the corners, and a look like this is a gimme.

The Spurs’ commitment to getting out early in this game was somewhat atypical. They average just over 11 shots per game in the first 6 seconds of the shot clock, and took 13 against the Nuggets. More importantly, they don’t score as efficiently off those attempts on most nights, with a eFG% of just 58.6 on average. In this game, their eFG% was 68.9 in the first 6 seconds of the possession, in large part because of the quality of the looks they were able to produce.

That’s exactly what fueled the Spurs’ 17-3 run early in the fourth. The team’s early offense hit a crescendo for four and half minutes, as they turned a 1 point deficit into a 14 point lead with 14 of their 17 points in that time coming before the possession was even 10 seconds old. They hit two three-pointers, dunked twice, and got two layups by playing outstanding defense and pushing the pace off rebounds and a steal each from White and DeMar. You can watch them all here.

That run allowed the Spurs to seize control of a game that had been up for grabs for much of the evening, and there’s a good chance this wasn’t just a one night show. The starters may not be likely to start flying up and down the court as a unit, but when even just a couple of members of the bench get on the floor, it’s like an agent of chaos has been unleashed. Sometimes that doesn’t go as well as it did in this game, but when the breaks are going their way, it sure is fun.