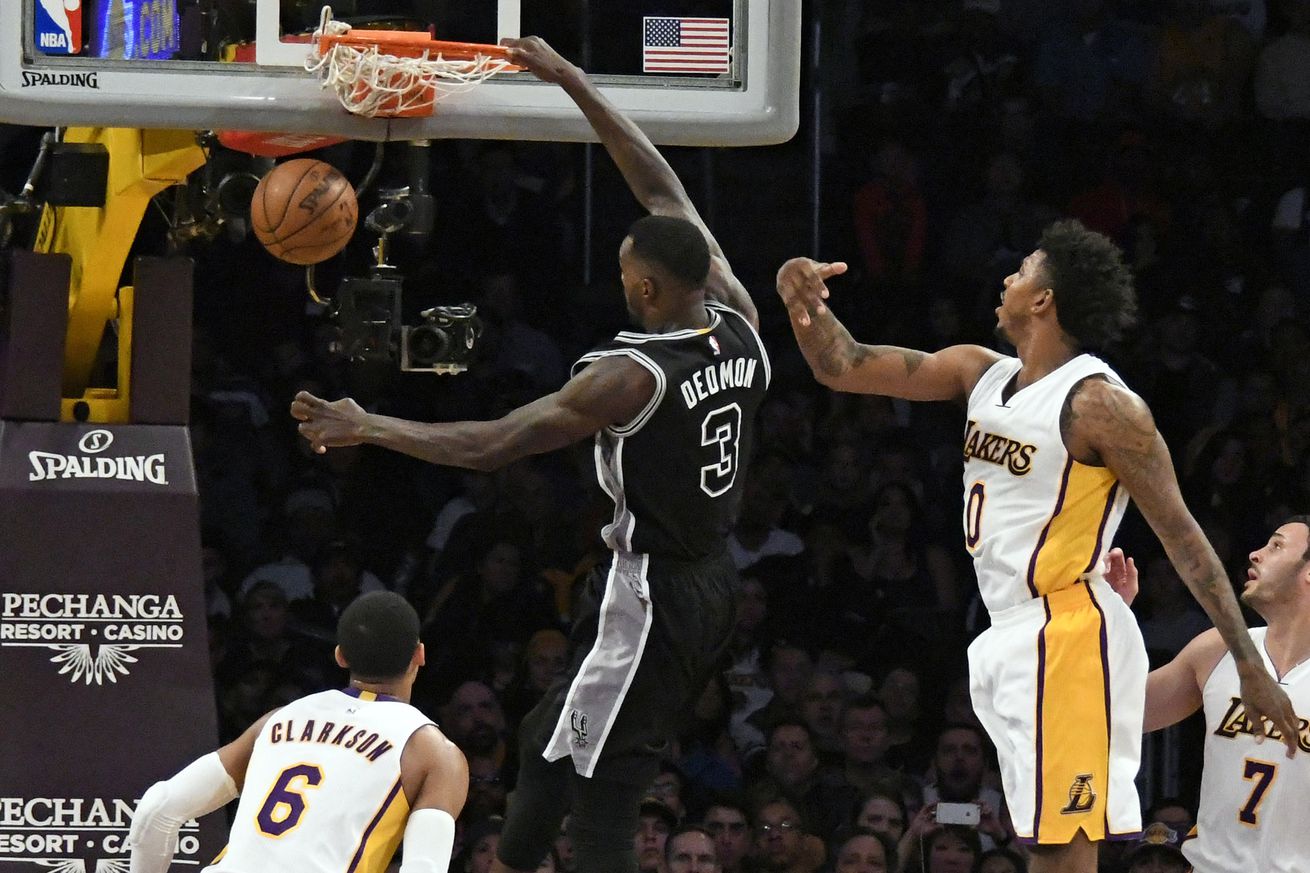 When is a choice not a choice at all?

Pau Gasol returned from a 15-game absence after the All-Star break and has played quite well, contributing mightily in wins over both Los Angeles clubs. That, in and of itself, was a pleasant surprise. However what was even a bigger surprise was that Gregg Popovich elected to bring him off the bench in both games, with Dewayne Dedmon starting at center. While Popovich has refused to commit to this move as being permanent, it shows: a) that the coaching staff has been paying attention to how effective Dedmon has been in Gasol’s absence, particularly on the defensive end, and b) how open-minded and flexible they’re willing to be going forward instead of returning to the status quo.

I’m assuming most of you have been paying enough attention to have formed a positive opinion on Dedmon’s play on the season overall and particularly during Gasol’s layoff, but what might not be obvious is the degree to which he’s been excelling. Per NBA.com’s Stats Index, his defensive rating from Jan. 19 onward, is 94.1, the best on the team.

To give you some perspective on that, the Spurs lead the league with a 101.0 defensive rating as a team. They led the league last year too, at 96.6. A fellow by the name of Tim Duncan led them in individual defensive rating last year at 93.8. Now, am I suggesting that Dedmon this season has been as good as Duncan was last year? No, don’t be silly. He’s actually been a lot more efficient offensively. Probably something to do with all those thunderous dunks.

The critical thing here is that Dedmon has been consistent regardless of role or who he’s sharing the court with. He’s not just a by-product of playing against opposing second units with the veritable stacked deck of Manu Ginobili, Patty Mills and David Lee. And he’s not just a beneficiary of a starting lineup featuring Kawhi Leonard, LaMarcus Aldridge, Tony Parker and Danny Green. His defensive rating for the season is 94.8, again tops on the club. Only Mills has better on/off splits. The Spurs are outscoring people by 13.8 points-per-100 possessions with Dedmon and by just 7.0 without him. The team’s defensive rating with Dedmon off the floor is 103.9, the worst on the club. Without Gasol, it’s 98.9. (For what it’s worth, check out what it is with Leonard off the floor.)

The Dedmon-Aldridge pairing just seems to work better stylistically and aesthetically than Aldridge-Gasol did. The latter features two players whose strengths and weaknesses are too similar, whose preferred spots on the floor are too alike, and who are both more offensive specialists than defensive. In layman’s terms, they’re both stars and see the game from a star’s mentality, when the ideal big-man combo would be to have one star and one effort/energy guy.

Let’s look at how the team’s big man pairings have fared:

Two arguments against futzing with the original starting lineup jump out right away, don’t they? First, it sure looks like the offense is more efficient with Gasol and Aldridge playing together, and we all know the Spurs have struggled to score against committed, talented opponents in the playoffs. Second, the Dedmon-Lee pairing has been so awesome together off the bench, why mess with it?

To me it comes back down to two basic, fundamental truths. One, if Popovich has to choose between being dominant defensively and average offensively versus being dominant offensively and average defensively, he’ll choose the former every time. And two, the deeper you go into the playoffs, the less important having a deep bench becomes. My hunch is that Pop and his staff have already surmised that Gasol will be all but unplayable versus small-ball pace-and-space teams like the Rockets and Warriors. It remains to be seen if Dedmon will be too, but they’ve got these next two months to find that out, or whether their only way to match up against those teams will be Aldridge and four smalls.

Here’s the part of the argument. The reality is that there really isn’t much of a drop-off offensively with Dedmon. A lot of his worst stretches with Aldridge have come in lineups where one or more of the other starters wasn’t playing due to rest, injuries, or substitution patterns. If you just break it down to how Gasol and Dedmon have played with the foursome of Aldridge-Leonard-Green-Parker, the picture gets a lot clearer.

Maybe you’re thinking all the pairing and lineup data is just window dressing to the real issue at heart. Leonard, by leaps and bounds, is the team’s focal point and his play will have the biggest impact on how far the Spurs go in the playoffs. So forget all the noise you’re saying, just tell me, “Who plays better with Leonard?”

This is not politics here, amigos. There isn’t a single “yes, but” here. Dedmon has Wally Pipp’ed Gasol and that’s all there is to it. He fits better next to Aldridge on both ends of the floor. Offensively it makes the pick-and-pop reads easier for both Leonard and Parker and Dedmon buys both more space on the perimeter, with opponents constantly having to be wary of lobs, the way DeAndre Jordan helps make the Clippers offense so deadly. Defensively, Dedmon has the range and explosiveness to make plays no other big on the team can make.

I understand that moving to the bench might seem like a demotion for Gasol, but he can thrive on the second unit, playing with quick-passing ball-movers in Manu Ginobili and Patty Mills, and their games suit his better. The Gasol-Lee combo gives the second unit another skill/hustle pairing and while it will be challenged defensively, I don’t anticipate them being toasted too badly against opposing benches.

Having Gasol as a reserve makes sense from a game theory perspective. He can be the big-man version of what Ginobili and Mills have been for most of their careers, a sparkplug to boost a struggling offense. If the starters are struggling early, you bring in offensive players that can make up a deficit. You don’t bring in guys who can’t score, right? Teams tend to start their best defensive players, and Pop has certainly done that throughout his career.

Finally, we need to look at the macro view of this, beyond just this season. With the team’s cap situation being what it is, the club will be forced to make some tough decisions this summer. Assuming Gasol opts in to the second year of his deal (it’s a mortal lock though I suspect the team wishes it wasn’t), the quintet of Leonard, Aldridge, Gasol, Parker and Green will account for 80.37 percent of the team’s available cap space for next season. Even if Ginobili retires and the team renounces Mills’ cap hold, they’re only going to have around $10 million in cap space, assuming Dedmon opts out of his deal, too. (Disclaimer: Jesus Gomez is a lot better at this cap stuff than I am, but I don’t think I’m too far off the mark here.)

Simply put, the Spurs are going to be able to afford just one between Dedmon, Mills and Jonathon Simmons, and perhaps none. I’m going to give them the benefit of the doubt, because of PATFO’s track record, that they will be able to get creative enough or perhaps inspire enough loyalty to get a “hometown discount” from one of those three. So that’s another reason for them to give Dedmon as much playing time with the starters as possible, to see if it’s worth choosing him over Mills, whose departure would sadden many Spurs fans, myself included.

We have a pretty good idea what the ceiling is with Gasol. Now it’s time to see what the Spurs have in Dedmon.