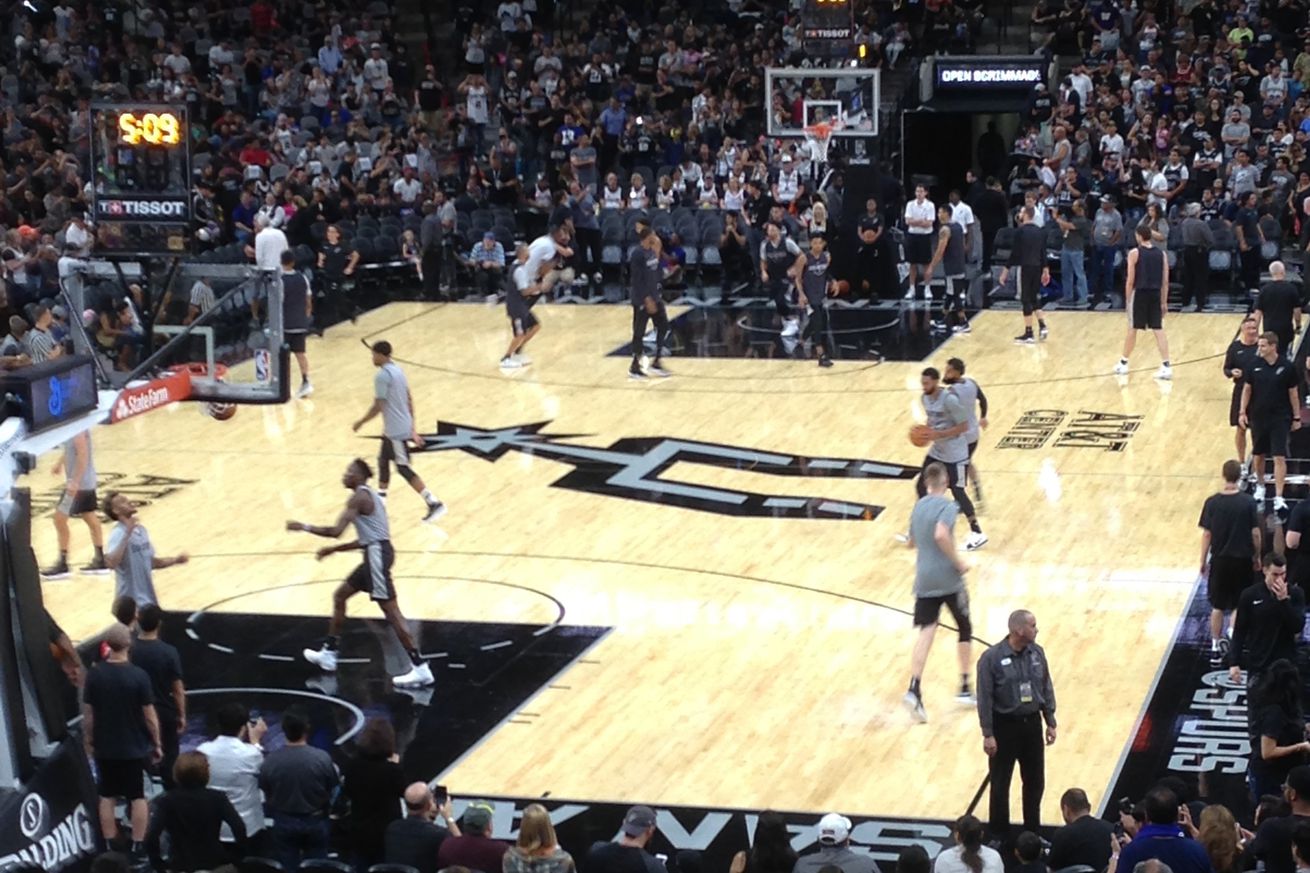 Saturday’s event opened on a light note, but the announcement of Kawhi Leonard’s status weighs heavy.

For the third time in four years, the San Antonio Spurs put on their free open event, the Silver and Black Scrimmage, giving fans an early look at their new squad and providing an unofficial kickoff to the 2017-18 season.

Those who arrived well ahead of the 11am tip were able to catch an early glimpse of two-way signee Matt Costello, the first player on the floor, as he warmed up with members of the training staff. As time passed, other fringe members took the stage—London Perrantes, Amida Bridah, Darrun Hilliard and Brandon Paul—and got some shots up as well. They were followed by more familiar faces, like Bryn Forbes.

Soon came the marquee names: Manu Ginobili and even Tony Parker, who’s not cleared to play for another couple of months but still participated in shootaround (and later addressed the crowd). With each appearance, the cheers grew, building to a bated climax that never came, as the team’s lone returning All-Star was nowhere to be seen. With the time on the shot clock ticking away this tweet from SA-EN’s Tom Orsborn ended the suspense:

Like Parker, Leonard also isn’t on the roster for the scrimmage. Don’t see him warming up either. #Spurs

And thus the event got underway, buoyed by the sight of 18 talented athletes but slightly weighed down by the absence of one, as a child behind me asked his dad the question everyone was wondering: “Where’s Kawhi?”

The scrimmage did offer a few interesting details for fans to simmer on, like the opening lineups for the Silver and Black squads:

In case you’re curious, here are your starters:

We’re still not sure whether Rudy Gay (who looked fine at times, but may not be in game shape quite yet) will come off the bench, or who will be the starting point guard on day one. But with Kyle Anderson (who Pop tabbed to start in place of an injured Danny Green at the beginning of last season) taking Leonard’s place, we could be looking at the starting unit on that Black team.

The scrimmage was predictably played at a low intensity, and of course the offseason rust was noticeable. Dejounte Murray airballed a three from the left side; Davis Bertans made a corner three — which didn’t count because he was standing out of bounds (the curse of having a sniper’s range, I guess), and Manu let a couple of alley oops sail high over his intended recipient’s outstretched hands.

And yet there were plenty of encouraging sights. It was terrific to see Parker on his feet and getting some shots up before the game. LaMarcus Aldridge and Danny Green’s jumpers appeared to be in midseason form, and Rudy Gay impressed with a drive to the basket that showed he still has some bounce in his step.

But Leonard’s injury certainly puts a dampener on things, if only to curb the anticipation of seeing what this new-look team is capable of, and it was slightly odd learning the reason behind his absence (rehabbing from tendinopathy in his right quadriceps, which will keep him out of the entire preseason) midway through the event. The MVP finalist did make an appearance following the game, but his status will loom over the team in the short term.

Kawhi is here tho #Spurs pic.twitter.com/3Elhcx7WP8

A few other notes:

The AT&T Center crowd filled up much of the lower bowl and, as usual, some went above and beyond to show their Spurs fandom, which resulted in me taking a couple of pictures of the backs of people’s heads.

Tiago in the house

Former Spur Tiago Splitter was in attendance, greeting fans before taking a seat between Gregg Popovich and assistant coach Ettore Messina on the sidelines. Neither coach was calling the shots on Saturday, as Becky coached the Silver team, while it looked like Will Hardy was coaching the Black team.

15th man Bryn Forbes entered the game late in the first quarter and quickly reminded us all that this is still the Summer of Bryn, reeling off five points, hitting from both long- and mid-range, and looking much like the guy who impressed in Summer League. New arrival Joffrey Lauvergne had a solid debut, showing off some nifty moves in the paint and operating well as a roll man.

The scrimmage was played at about three-quarter’s pace, which is just the way Kyle Anderson likes his basketball. Thus, it’s no surprise that the fourth-year forward had a nice performance, hitting floaters in the paint, picking up assists in the open floor and using his bullet-time style of game to get to his spots. Here’s Pop on KA after the game:

Preseason is just around the corner, with the Spurs tipping off against the Kings in Sacramento on Monday, October 2nd. Hooray for basketball.