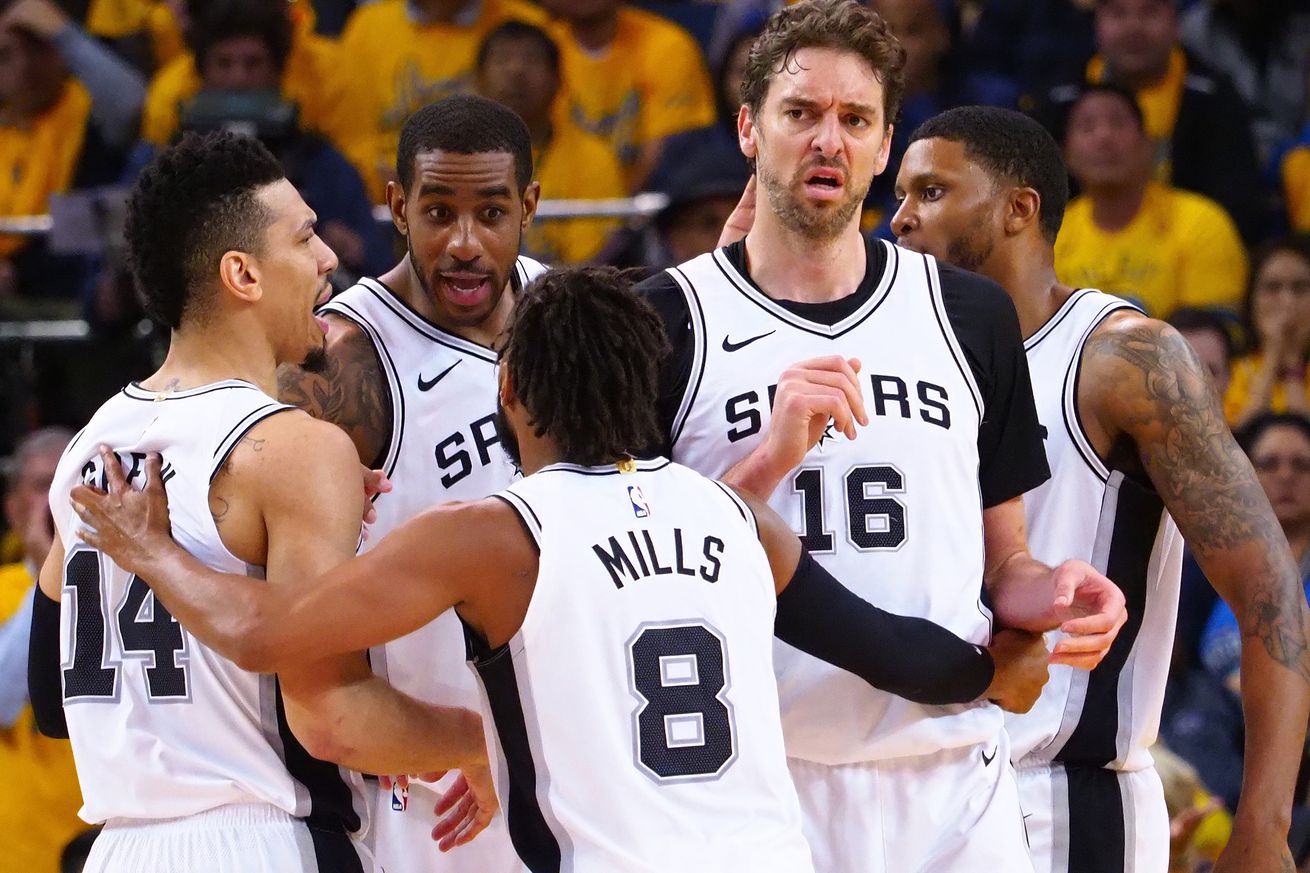 Beginning with the starting five, and working all the way down the roster, there aren’t any obvious answers for what Pop will do.

The Spurs roster for the 2018-2019 season is pretty much set, with the big news obviously being the addition of DeMar DeRozan. Both Bleacher Report and ESPN expect Rudy Gay to join him in the starting lineup alongside last year’s starters: Dejounte Murray, LaMarcus Aldridge, and Pau Gasol. That makes sense from a talent perspective, but Dejounte, Rudy, LaMarcus, and Pau only shared the floor for 14.5 minutes last year, and they were -14 in that time.

The addition of DeMar may be the catalyst that lineup needs, but it’s also possible the lack of spacing will strangle the offense, as it often did last year. If that’s the case, Marco Belinelli would be the obvious solution, but he and Demar will struggle to defend on the perimeter. Dante Cunningham is a better defender than Marco, but might not shoot well enough to provide an advantage over Rudy.

On the flip side of that equation, and one of the reasons it’s difficult to pin down the last starter: the Spurs have a lot of good players. Using 538’s CARMELO projections for the Spurs next year, as compiled here with Dante instead of Brandon Paul, the team will have 9 players at or above replacement level. There are 126 different combinations possible using just those players, and the Spurs have 3 more within shouting distance of replacement level, with Manu, Marco, and Dante all projected to be just below. Given the specific challenges this team will face finding the right combination of shooting and defense, and Pop’s proclivity for playing a deep bench, we may get extended looks at just about every combination possible.

This is the full roster, as currently constructed:

Let’s work from the presumption that Manu will return, based solely on the fact that the Spurs and the NBA are better off with the possibility on any given night that he might do something nobody’s ever seen before.

As a basis for comparison, the CARMELO tool projected last year’s team to also have 9 players at or above replacement level, including Kawhi. Even though he only played 9 games, that worked out to 214 different lineups appearing in multiple games, second only to the Jazz, with 216. No other team was over 200.

With so many new potential rotation players, and such an interesting assortment of strengths and weaknesses up and down the roster, Pop will have his hands full finding rotations that work consistently. There are also some changes on the horizon that will introduce even more instability. Pau’s minutes have been declining steadily since 2014-15, hitting a career low at 23.5 MPG last season, and Poeltl looks like a viable replacement. Jacob Goldstein’s lineup predictor tool already estimates the starting lineup’s Net Rating would be +2.3 better just by making that swap.

While we’re talking about the young big man, just for fun, here’s the list of centers who’ve averaged over .175 WS/48 for more than 1500 minutes at age 22 or younger in their second year in the league:

On the other end of the lineup, Murray should see a dramatic uptick in minutes from last year’s 1743. While that’s great in terms of keeping the best players on the floor, it will limit the time available for Patty Mills, Bryn Forbes, Derrick White, Lonnie Walker IV, and Manu Ginobili to find their rhythms. Derozan has averaged over 2400 minutes per season through his 9 years in the league, and Dejounte should get close to that this year. To free up enough minutes for the Spurs quartet of other guards to get regular playing time, Derozan and Manu will both have to spend significant chunks at the 3. Still, Patty played the 2nd most minutes on the team last year, and if things are going well for the Spurs, he won’t be anywhere near that this season.

There’s also going to be a constant battle between spacing and defense, as the roster lacks even a single player who excels at both. According NBA Player Grades from BBall Index, only Bryn, Marco, and Davis graded out at A- or above in perimeter shooting.

The Spurs may have a spacing problem next season, the current 2018-19 roster only has 3 players who graded out as an A- or better (top 20% of players) as a perimeter shooter last season:

All 3 graded out in the D-F range on multiple defensive categories, though Davis snagged an A- on Interior Defense.

Perimeter Shooting: A
Off-Ball Movement: A
One on One: A-

Perimeter Shooting: A-
Off-Ball Movement: A-
Playmaking: B-

Perimeter Shooting: B+
Off-Ball Movement: A
Finishing: B

This roster presents a fascinating set of trade-offs that will make every game an invaluable opportunity to learn more about who fits where. Before we get to the games, though, we can use both the CARMELO Wins Above Replacement projections and Goldstein’s lineup predictor tool to make some educated guesses about which lineups might work and which ones won’t.

Though Murray, DeRozan, Gay, Aldridge and Gasol will almost certainly be the starting five to begin the season, they’ll likely struggle to produce enough spacing to score efficiently against good defensive teams. Unfortunately, a switch from Gasol to Poeltl won’t help that at all. You could say that Poeltl’s a 50% 3-pt. shooter, but on only 2 attempts in 136 games. The lineup predictor sees Poeltl in Gasol’s spot as the Spurs best lineup, at +10.0, but that would still only be tied with the Pacers for the 12th best starting five in the league, according to Goldstein’s projections for every team.

Pending a major resurgence from Rudy, it probably won’t be long before he returns to his sixth-man role, where he spent the majority of last season, with Marco or possibly Dante Cunningham starting in his place to provide more spacing while Rudy adds some much-needed punch to the bench. On the other hand, if Rudy is able to get back to his former self, and Poeltl can replace Gasol, the Spurs starting lineup could be among the best in the league.

Removing the likely opening day starters, as discussed above, CARMELO’s five best Spurs are Mills, Ginobili, Belinelli, Bertans and Poeltl. They make a pretty nice lineup, too, with Patty at the point, Manu and Marco on the wings, and Davis and Jakob at the 4 and 5. Defense will be an issue, as the lineup predictor tool estimates their defensive rating at 113.8, which would be last in the league by a country mile. Still, they eke out a positive Net Rating of 0.3 because their passing and shooting will lead to even more buckets than they give up.

The lineup predictor doesn’t agree that’s the best bench lineup, though. It suggests replacing Patty with Derrick and Manu with Dante. The tool appears to artificially inflate Derrick’s impact because it overestimates his actual 3-pt. shooting ability based on last years small sample size (estimated 57.5% this season based on his 8 of 13 from three in 17 games last season). Even after correcting for that by knocking his 3-pt % down to 35%, much closer to the 33% he shot in Austin last season, he’s still projected to bring that lineup’s Net Rating up to +2.2. Switching Manu for Dante brings it up even higher, to +4.0.

Dejounte is going to make mistakes from time to time and he’s going to get in foul trouble. When he’s on the pine for extended periods, and Demar and LaMarcus have to rest, the offense is going to look just as rough as it did at times last season, with no Kyle Anderson to bail them out with a herky-jerky 6 second drive to the basket. Patty, Manu, Dante, Rudy and Pau are going to find themselves on the floor together — and it might be painful.

On nights when Manu has it going, they’ll score just fine, though defense will remain an issue. When he doesn’t, look out. The lineup predictor has their Net Rating at -4.7. The only way to make it worse, using players on the Spurs roster in a lineup that makes sense, is to replace Patty with Bryn, which drops their Net Rating all the way down to -9.7, mostly because the tool penalizes that lineup for not having any Guards (both Manu and Bryn are categorized as wings for some reason). But treating Bryn as a guard isn’t exactly a panacea, as it only raises the Net Rating up to a still pretty miserable -5.7.

Manu and Marco and I don’t care who else is on the floor. The return of the Manu-Marco mind-meld is going to be magical. Enjoy this brief trip down memory lane.

In a close second, we’re also going to see something almost as memorable.

Most athletic Spurs lineup ever

Murray, Walker, DeRozan, Gay and Aldridge is going to be a ton of fun. Both CARMELO and the predictor tool project Lonnie to be a net negative on defense, but he’s got the tools to be an effective perimeter defender. If he’s even a little ahead of schedule, and Demar is focused on that end, this may also double as the Spurs best defensive lineup later in the season, especially against smaller lineups. The lineup predictor estimates a Net Rating of +4.7 but spacing will be an issue here too, unless someone has a breakthrough season from deep.

Dejounte and Jakob are entering their 3rd year and Lonnie’s a rookie. Demar is only 29 and LaMarcus is 33. Barring a major trade, this lineup essentially defines the team’s ceiling for the next couple of years. If Lonnie and Demar can survive on the wing defensively, and there’s enough spacing for the offense to flow, they could outperform the projected +8.0 Net Rating by a large margin. As Dejounte, Lonnie, and Jakob continue to develop, this could be a fun group to watch for years to come.

Digging into the CARMELO projections and the results of Goldstein’s lineup predictor tool highlights the limitations of this year’s roster. There simply might not be enough shooting to consistently beat a modern NBA defense. The Spurs have successfully bucked the trends time after time, and they’ll have done it again if PATFO can make this work. Aside from the potential issues with spacing, the Spurs are also going to miss Kyle a lot. His versatility on both ends of the floor unlocked a lot of lineups last year that might not even be able to stay on the court now. It will be interesting to see how Demar’s ability to break down defenses and score might do the same for this year’s team.

On the other hand, the projections appear to underrate aspects of this roster. Last year’s biggest need was someone who could break down a defense, and the Spurs now have one of the best in the business. They also have a defensive nightmare at point, and one of the top big men in the game. That’s enough to compete, and certainly enough to justify playoff aspirations. More importantly, the projections make the Spurs’ future look pretty bright. With a little growth from Walker and Poeltl, the Spurs starting five of the future might already be in place.