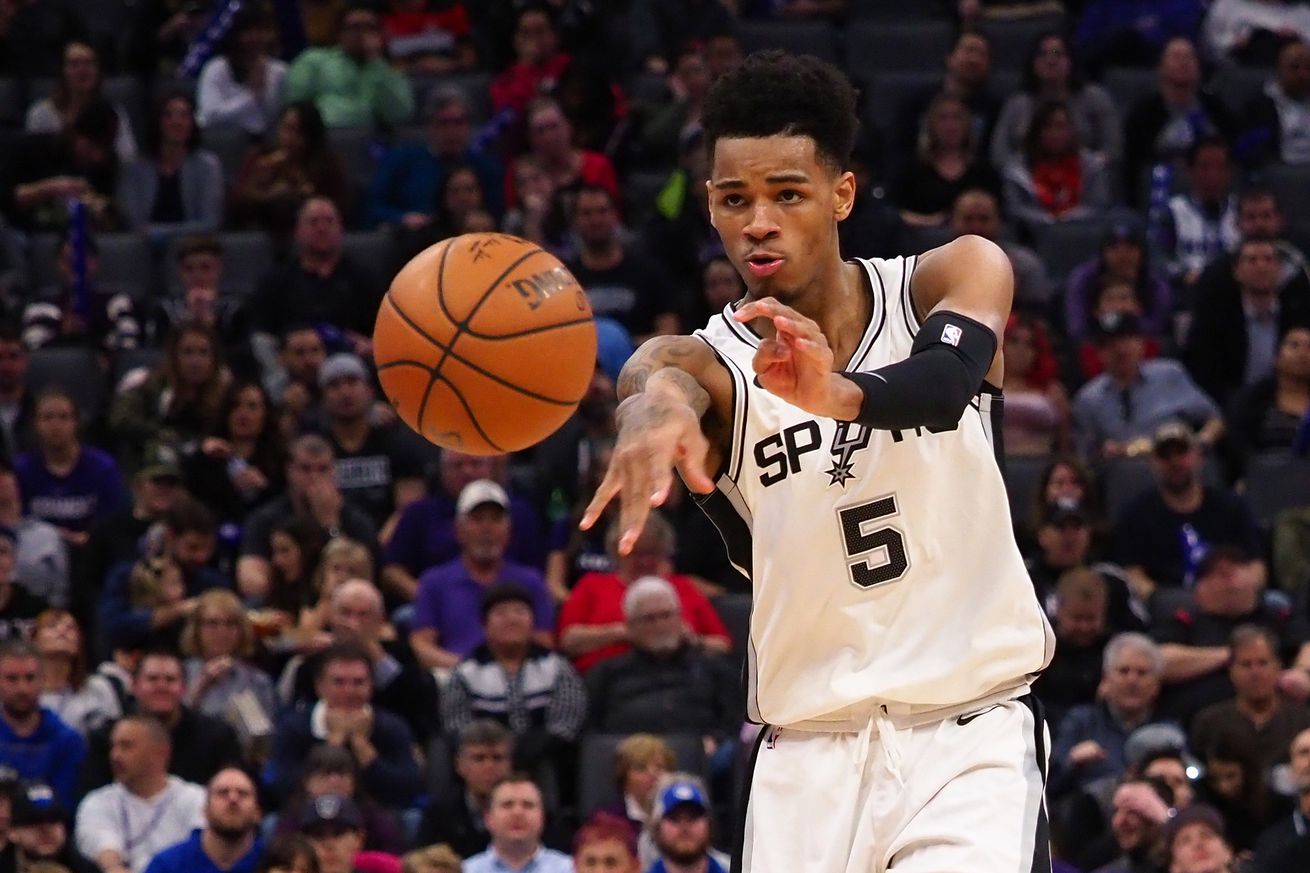 What last year’s offensive struggles mean for this season

The Spurs’ offense spent much of last season in handcuffs. The team ranked 17th in offensive rating, their lowest since 1996-97 when David Robinson only played 6 games due to injury. Like in 1996-97, much of it had to do with the team lacking its primary offensive force. Unlike that year, the team still fought its way into the playoffs, but Kawhi Leonard’s absence highlighted how the team’s offense has changed since the height of the Beautiful Game just a few years ago.

The Spurs’ contrarian movement away from the pace and space era they helped usher to the forefront of the league has been well documented, and these numbers are emblematic of that evolution. The Spurs of 2012-13 and 2013-14 used movement and passing as weapons to turn otherwise limited players into the necessary components of a nearly unstoppable offensive machine built around its big three and an emerging star. With their egalitarian approach, the “Good to Great” championship squad led the league in passes, assists, and secondary assists. Eight players on that team took over 500 shots, but nobody took more than 1000.

The next two seasons were transition years on offense, as Leonard grew into a high-usage, high-efficiency offensive focal point, and the team integrated LaMarcus Aldridge. By 2016-17, the team was far more reliant on the singular abilities of its two best players. That year marked the first time since Tim Duncan’s 2002-03 season that a Spur took more than 1300 shots, with Leonard doing the honors, and Aldridge coming in second at 1049. That worked largely because Leonard had the kind of offensive season the NBA seldom sees. He finished the year with a true shooting % of .610 on those 1312 shots, something that’s happened only 36 other times in NBA history. Aside from those two, only three other players took over 500 shots.

Both Leonard and Aldridge are able passers, but the offense focused on getting the ball in their hands and letting them create an advantage. With two players taking over a third of the team’s shots, passing and assists were bound to decline, and they did. The team threw nearly 1500 fewer passes, 125 fewer assists, and 79 fewer secondary assists than the 2013-14 squad. While it’s tempting to see this as shift towards iso-ball, that doesn’t appear to be the case. Using data from NBA.com’s tracking of play types, the Spurs ranked 27th in isolations that year.

A better explanation is the team’s transition towards the post. They ranked 4th in the league in 2016-17 in post-ups, with 813, and the 2017-18 Spurs picked up right where they left off, leading the league with 1018. Last season also continued the trend towards a slower pace relative to league average, fewer assists per game, and a much lower assist %.

Without Leonard, or the motion and passing that made the team great just a few years prior, the offense bogged down. Other injuries didn’t help; Tony Parker and Manu Ginobili, two of the team’s best passers, missed significant time. In their absence, Pau Gasol made the Spurs one of 5 teams in the league to be led in total assists by a big with 238, although they were one of just two teams led by a player with less than 300.

Gasol is an excellent passer, especially for a big, but that speaks more to the lack of consistent distribution from the team’s primary ball-handlers than anything else. Dejounte Murray’s limitations on that end were part of the problem, but it’s unfair to expect any 2nd year player to offset the loss of a team’s offensive cornerstone. With Parker and Ginobili nearing the end of their Spurs careers, and Patty Mills as the best option for running the offense most nights, there should have been little reason for hope on that end.

Players up and down the roster were forced to push the limits of their games, and, in most cases came through in surprising fashion. Aldridge had a career year, Kyle Anderson played his way into a 4 year, 37 million dollar contract with Memphis this summer, Murray had a breakout season, and Danny Green showed more off-the-bounce game than ever before, to name a few. Still, the offense was often noticeably out of rhythm.

That showed up as clear as anywhere in the team’s passing and assists. Players turned down open threes and drove into the teeth of the defense, or worse, hesitated too long to do anything of value with their brief advantage. Even good plays often resulted in long, contested twos.

Fortunately, that will almost certainly change this year. With DeMar DeRozan on board, the Spurs passing attack should pick back up slightly, even if they continue to play at one of the slowest paces in the league. DeRozan averaged a career high 5.2 assists per game last year. Were he to repeat that this season, he’d be the first Spur not named Tony Parker to break 5 assists per game since Avery Johnson in 1999-2000. In addition to his passing, DeRozan’s strengths line up pretty well with much of what the team lacked last year.

Brandon Meiners laid out how he will fit into the Spurs pick-and-roll attack in great detail here and here. The short version is that the team’s other guards will spend a lot more time off the ball than last year. He is probably a better passer than Leonard at this point in their respective careers, with more assists per game, a higher assist rate, and more potential assists last year than Leonard’s ever had. That should lead to more open looks off those pick and rolls. Since almost half of his assists have gone to bigs over the course of his career, Aldridge, Gasol, and Jakob Poeltl will probably benefit most.

That’s especially important if we take a deeper look at the Spurs assists last year. Far too many went to shooters in the long mid-range, and not nearly enough resulted in lay-ups, dunks or three-pointers. That’s not the case for DeRozan. While some of that is out of the passer’s hands – if the shooter misses, it doesn’t matter how good the pass was – it is indicative of the ability to compromise a defense, make good reads, and deliver the ball on time and on target.

When you breakdown last season’s assists by shot distance and shooter position for every player on this year’s team, you can see the difference.

The first thing to look at is how the Spurs returning guards match up with DeRozan in terms of the types of opportunities they generate. Bryn Forbes, Murray, Derrick White, and Mills combined for 367 assists at the rim and around the three-point line. DeRozan had 347 on his own. To be fair, White got very limited opportunities to impact that bottom line, and he certainly has the skill set to make a difference. Even more striking is how many more assists the Spurs’ guards got in the mid-range. That certainly has something to do with playing alongside one of the best shooting big men in the game, but it’s clear DeRozan brings a completely different dynamic to the Spurs passing attack.

Another interesting aspect he brings is who receives his assists. He gets a lot of buckets for the guys who screen for him. In fact, he threw as many assists to his bigs last year as Mills and combined. On the flip side of that, Murray, Mills, and Gasol all got a significant percentage of their assists on passes to wings, a situation that may end up being very much to DeRozan’s liking.

The Spurs also have several key young pieces that might help improve the team’s ball movement. Forbes, White, Lonnie Walker IV, and Davis Bertans each bring skills that could unlock a more complex and balanced offensive approach. If they can earn significant playing time this year, along with Marco Belinelli, the concerns over spacing issues will disappear. Likewise, even a little progress from Murray in terms of shooting or running the offense could have large implications for what defenses will be able to do against them.

In the meantime, expect this year’s team to continue to play slow, with a good mix of pick and rolls and post-ups, a few more assists, and a slightly higher assist % than last year. It might not be anything flashy, and the numbers probably won’t be gaudy, but the passing will be better, and the offense will, too.