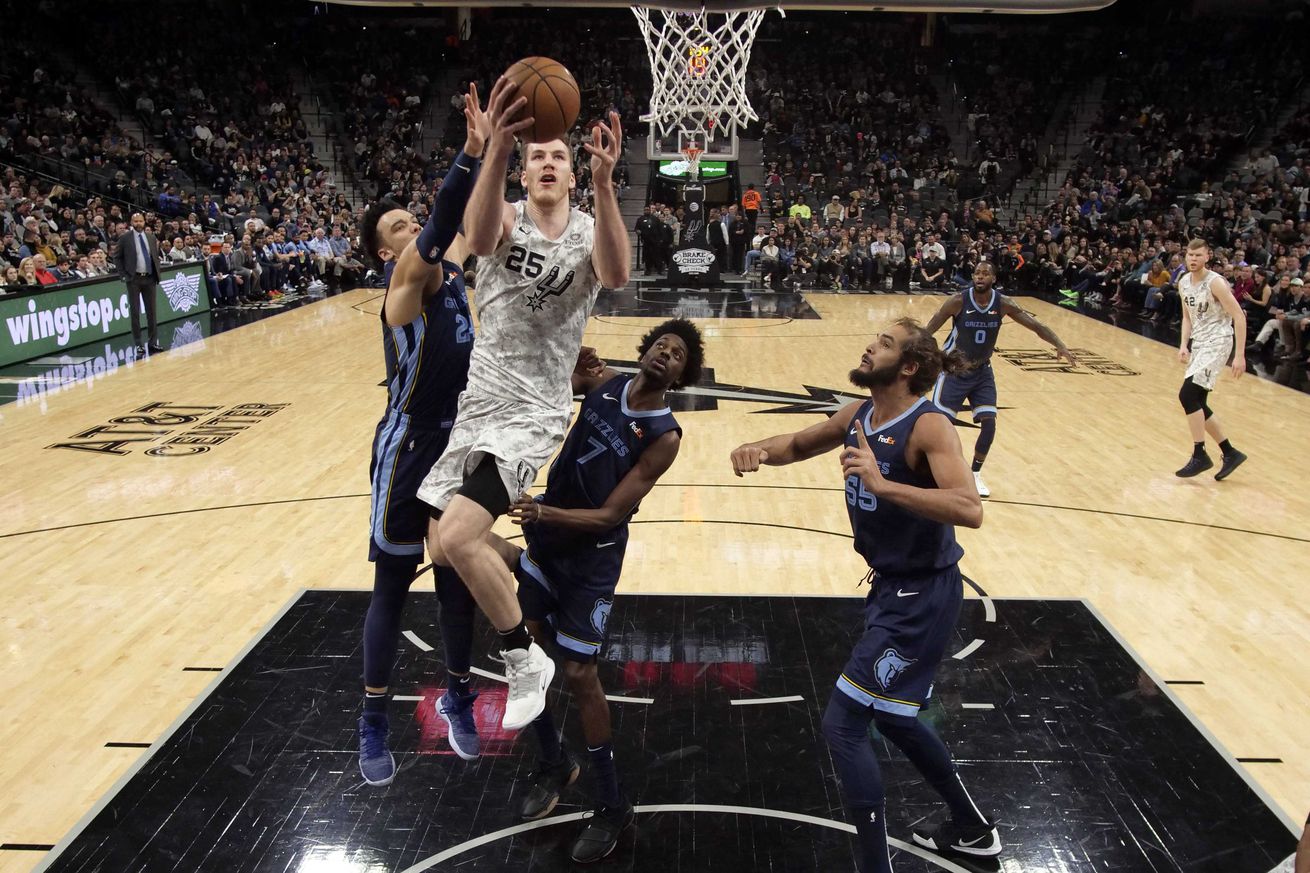 It’s called a double drag, and it worked even though it didn’t.

The Spurs’ Saturday night rematch against the Grizzlies was an odd one. It had neither the feel nor the execution of a typical blowout, and yet the Spurs meandered away from the Grizzlies as the 2nd quarter wore on and found themselves up 20 at halftime. That ended up being the final margin of victory as well, despite a brief scare that took the lead to single digits midway through the 4th.

In the midst of all the bricks (the teams shot just over 43% combined and Memphis was 4-14 on wide open threes) and fumblerooskis (the Spurs scored twice on plays where the assist or secondary assist came, quite literally, from the seat of their pants), the Spurs dropped in a nice wrinkle to one of their most common actions, the double drag screen.

To understand why this play works so well, we need to take a look back at both the way the Spurs used the double drag and how the Grizzlies defended it over the first 3 quarters.

Early in the first, Derrick White brought the ball up the left side of the court, and the team’s two bigs, LaMarcus Aldridge and Rudy Gay, lined up for screens back towards the middle of the floor.

Mike Conley slides up to deny the screen and Marc Gasol drops deep to contain penetration, so Derrick rejects the screen and heads into the right corner. This forces Gasol and Conley to switch, giving the Spurs a significant mismatch. Rather than try to take advantage of the switch, though, Derrick tries to hit Rudy on the roll. It’s not a bad pass, but Jaren Jackson Jr. is able to deflect it, and the Grizzlies come up with the steal.

What’s interesting is how deep Garrett Temple is helping in the paint and how very alone Bryn Forbes is in the opposite corner.

Marco Belinelli had the ball in his hands the next time the Spurs ran it.

Kyle Anderson stays even with the screen so Marco uses it. JaMychal Green hedges briefly, giving Anderson a little more time to recover as he navigates under the two screens, but Marco has a small window and pulls the trigger once he clears Aldridge’s screen. Anderson contests, and it looks like the two high five on Marco’s release, but no foul is called and the shot clangs off the rim.

In this alignment, with a knock down shooter who’s not much of a roll threat setting the initial screen, Anderson and Green are able to play this straight up, and the result, a contested pull up three, is a good one from their perspective.

Patty ran it in the first quarter, too.

Unlike Derrick and Marco, Patty gets into the play with pace, and his crossover back away from the screen breaks the Grizzlies’ intended coverage. Green is ready to hedge again and Joakim Noah has dropped to the free throw line, meaning they need Justin Holiday to stay with Patty. Instead, he’s a little too eager to beat Patty to the screen and gives up penetration.

That forces Noah to help on Patty’s drive and Dillon Brooks to pick up Jakob Poeltl on the roll, which results in an easy layup. Again, though, look how open Marco Belinelli is in the weakside corner when the ball handler rejects the screen. Another important note on this one is that after leaving the strong side corner empty the first two times the Spurs ran this action, it’s filled here, and will be on each of the subsequent 4 times they use it.

Midway through the 2nd, Derrick took another crack at it.

Derrick gets to the screen this time and Rudy lands enough of it to put Conley behind the play. LaMarcus rolls and Rudy stays out at the arc, leaving Conley to switch on to LaMarcus since Jackson doesn’t want to stray too far from a good shooter. This should probably be a double switch, and looking at how Conley pivots away from Derrick once he realizes he’s beat, it’s possible that’s what the Grizzlies intended to do.

It would make more sense for Jackson to stay with LaMarcus on the dive and Conley to pick up Rudy at the three point line, but that’s not what happens. Instead, Derrick gets an open 14-footer with LaMarcus in excellent position for the rebound, should he miss.

The Spurs went back to it twice more late in the 3rd quarter. On the first, the Grizzlies completely blew the coverage.

Anderson steps up just before Davis arrives to set the screen, giving DeMar the sideline, which DeMar takes with ease. For this coverage to make sense, Jackson, who’s guarding a non-shooter in Jakob, should be much deeper, like Gasol was the first time the Spurs ran this action. But he’s not and the Grizzlies collapsing defense is unable to both stop penetration and the roll. Dillon Brooks never even gets into the paint, either as a result of his own inattentiveness or the team noticing just how open the shooters on the weak side had been previously.

On the 2nd, the Grizzlies played the initial action really well.

Carter goes under the screens, Jackson shows just long enough to deter Patty from shooting or driving and Green helps on Poeltl’s roll until Carter gets back to Patty, allowing Jackson to recover. Unfortunately, Green get’s a little over-aggressive as he heads back out to Dante Cunningham, taking a chance to go for a steal that would’ve been a sure 2 points the other way. He’s a step late, though, giving Dante an easy two-on-one with Jakob against Jackson. The result is another Poeltl jam.

At this point, the Spurs had scored four consecutive times out of the double drag, a relatively simple action which results in numerous potential outcomes depending on the strengths of the player with the ball and those setting the screens, as well as the coverage the defense chooses to play and how well they execute.

When the Spurs broke it out again at the beginning of the 4th, though, they used it as an entry point to a more complex play.

First, Dante and Jakob set their screens a little lower and intentionally give Carter a path over the top. Screening is much more complicated than just trying to eliminate a defender from the play, and in this case, these are perfect. Both Green and Jackson drop to protect against penetration and defend the roll. As Carter gets back to Patty, it appears the play has been thwarted, but the Spurs are just getting started, and there’s already action lower on the floor that hasn’t been present previously. Davis Bertans is running across the paint to set a screen on Dillon Brooks to free up Marco heading out to the left corner.

The Grizzlies do an excellent job of denying Marco, but completely miss Davis popping up to the top of the key. With Dante and Jakob screening, Green and Jackson so deep in the paint and both Brooks and Holiday guarding Belinelli, there’s nobody even remotely close to Davis. He’s too wide open, though, and leaves it a foot short, just catching the front of the rim.

The double drag is one of the Spurs most common actions, especially in semi-transition, and has long been a staple of their offense, as well as many others across the league. You can read and watch more about it here, here, and here. Aside from the numerous options it presents on its own, it can also work as an excellent setup, as it did on this play.