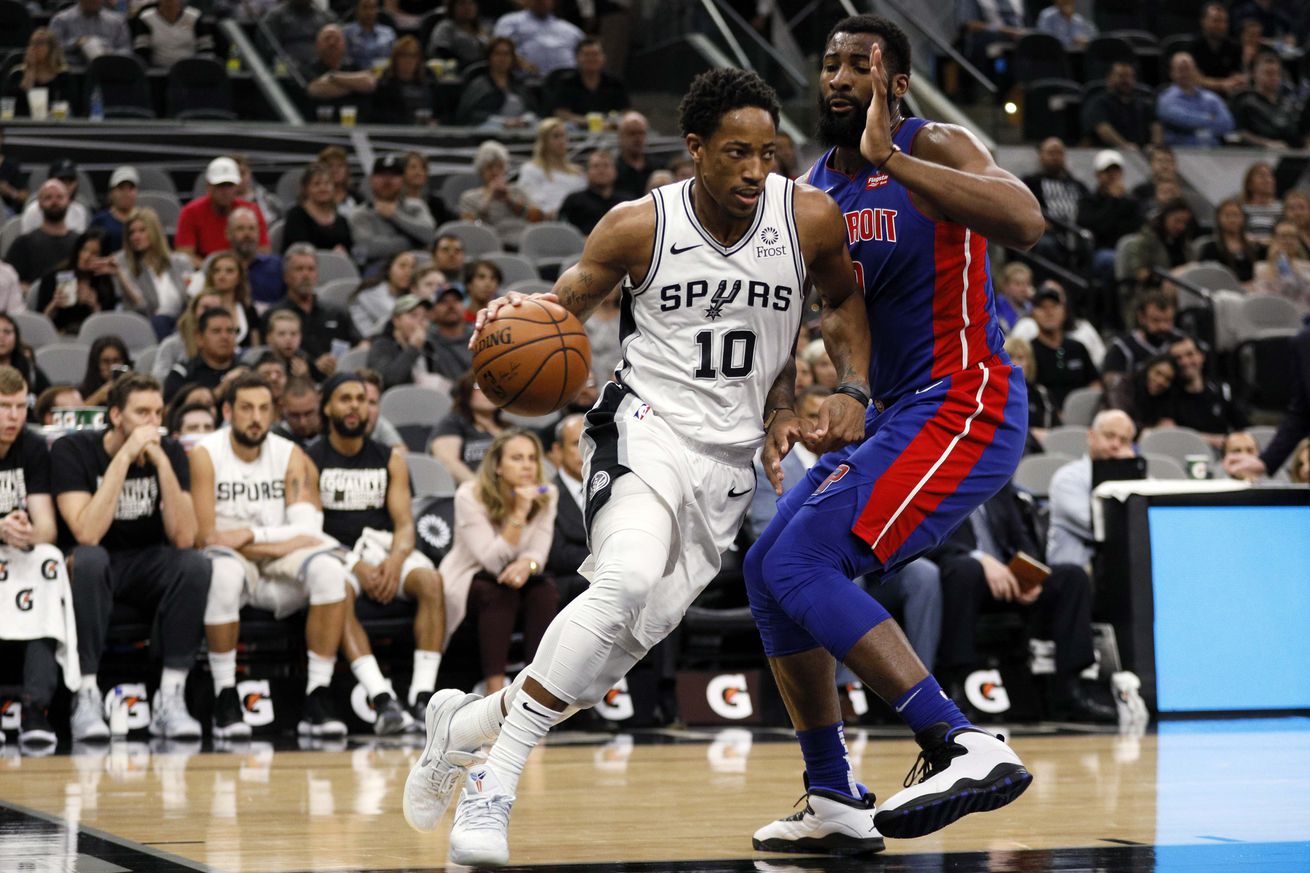 San Antonio got back home (and back to winning) on Wednesday night — and here’s how they did it.

The Spurs used an array of spectacular passes to cut apart the Pistons’ defense in their Wednesday night victory. Though the team only generated 24 assists, right at their season average of 24.5, the ease with which they made highlight reel passes time and again was remarkable.

DeMar DeRozan led the way with 8 assists as he fell just a short of the 2nd triple double of his career. His best pass was likely this drive and kick early in the 3rd quarter that sprung Derrick White for an open three on the right wing.

The play starts with a pistol-like action, a guard or wing screening for the ball handler on the wing as they move upcourt, typically employed as a form of early offense. Though the pistol offense can be very effective, the Spurs most often use this screen just to get DeMar a mismatch on the baseline, which is exactly what happens here.

Derrick gets the switch then moves over to the top of the key. As DeMar goes to work against Reggie Jackson on the right side, he’s got LaMarcus Aldridge in the dunker position along the opposite baseline, Jakob Poeltl at the elbow, and Marco Belinelli on the left wing. Andre Drummond drops deep into the paint to keep DeMar from getting to the rim, leaving Jakob open near the free throw line.

With DeMar driving baseline, Jakob moves towards the front of the rim. Even with Andre Drummond in between DeMar and his Austrian big man, that’s enough of a concern that Bruce Brown helps down off Derrick to prevent the easy drop off and dunk. That leaves Derrick all alone up top, but DeMar’s got a forest of players, including a pair of 7 footers, from both teams in the way.

DeMar hangs in the air just long enough to find the smallest of openings. He uses both hands to fling it as hard as he can back and to his left, somehow threading the needle over his head and between Drummond’s waving arms, leading Derrick farther out to the right wing where he has a wide open look. That’s a 30 foot pass thrown on the way down, traveling away from the target, through an opening just larger than the ball to a player he could only see out of the corner of his eye. It’s incredible. And Derrick makes it pay off by draining the three.

Despite the team’s poor play of late, the return of this version of DeMar, the one that slashes and kicks opponents to death, is a good sign. That he wasn’t the only Spur making pretty passes is another one.