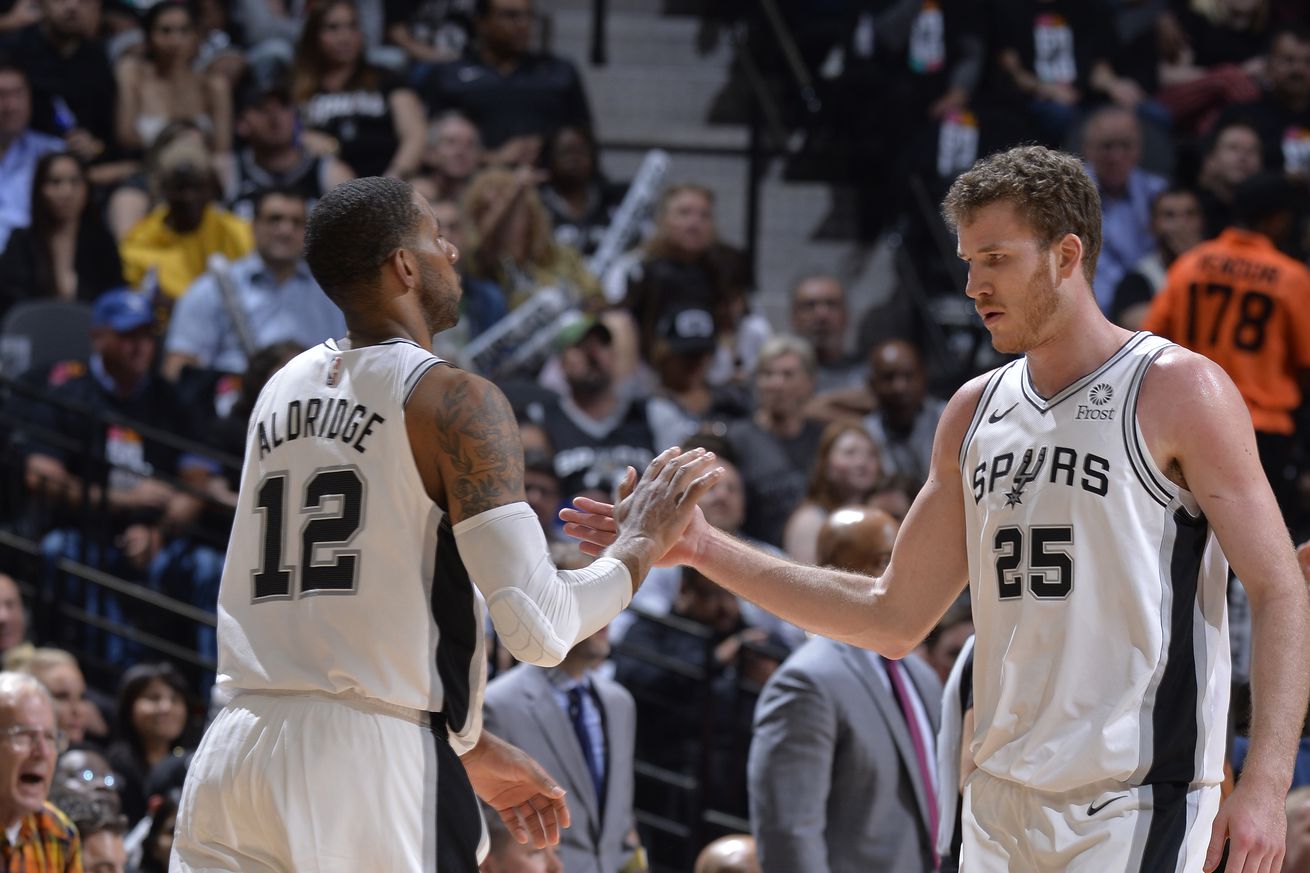 Through three games of preseason play, the Spurs’ rotation has been relatively consistent. Even with the scarcity of hard data due to the nights off various veterans have received, it’s pretty clear which way the team is leaning.

The starting lineup, as Gregg Popovich indicated, will likely be the same as at the end of last season, except Dejounte Murray will man the point ahead of Derrick White. The depth chart, at this point — excluding the rookies and two-way players and acknowledging a bunch of positional overlap that gets ignored in simple breakouts — seems to look something like this:

There’s lots to quibble over here, and the Spurs definitely don’t approach lineups with anything like this level of rigidity, but it’s one way of delineating who’s where in the pecking order. While a lot could change between now and opening night, and much will change through the course of the season, this arrangement throws some pretty clear signals, a few of which are alarming and all of which are related.

It begins with starting Jakob Poeltl alongside LaMarcus Aldridge, which is concerning because we’ve already seen this movie and didn’t really like it the first time. The Spurs scored 104.2 points per 100 possessions with both on the court last season, per Cleaning the Glass, and were outscored by a whopping 8.3 points per 100. Continuing to throw those two out on a nightly basis essentially guarantees the team will be playing from behind.

Of course, it’s possible that swapping in Dejounte and making some small changes to how they play in that configuration could be enough to keep the offense afloat, but that hasn’t been the case so far in exhibition season. Regardless, as long as the Spurs stick with the usual pattern of subbing Jakob out early then rolling with one big for the majority of the game, it won’t be a critical issue in and of itself.

Unfortunately, committing to a two big front has some ripple effects down the rotation. It is, at least in part, responsible for the logjam at guard and on the wing that has Lonnie Walker mostly boxed out of playing time at the moment. With at least 6 players ahead of him in line at the 1, 2 and 3, there will be little chance for Lonnie to earn more minutes.

As incomprehensible as that decision may be, it is also completely predictable. Coach Popovich has always leaned heavily on his veterans, and rookies have had to not just earn playing time, but demand it by clearly outplaying the person ahead of them in the rotation. That wouldn’t be such a problem if the team had less depth in the way.

But if LaMarcus is taking up even just a handful of minutes at the 4, one of Rudy Gay or DeMarre Carroll will likely end up spending a little time at the 3. After DeMar gets his 30+ minutes, there isn’t much left over for Marco or anyone else. But if they played with one big the whole game, all of that would shift a little, freeing up 5-10 more minutes that could be critical for the development, and just as importantly, the showcasing of Lonnie’s skills.

That is, essentially, taking minutes away from Jakob to give to Lonnie. As compelling as that might be, especially if the Spurs feel like they know what they have in the big Austrian, there might be an even better reason to move in that direction.

Thus far, the team has refused to play Derrick and Dejounte together. Assuming it actually means something and isn’t just a preseason arrangement, that’s problematic. If, and that’s a big if, they can’t play to together this season, the Spurs won’t be much better than last year, and that very well could mean missing the playoffs. When a team’s 3rd and 4th best players are limited to 24 minutes per game and can’t play crunch time together, it’s a bad sign.

However, there’s a good chance that there’s something else afoot. Keeping them separate could serve as a means to help manage their minutes as Dejounte returns from injury and Derrick recharges from his long summer. At the same time, Dejounte is still getting his feel for the game back, and asking him to share touches with another point guard would take away some of his reps.

There’s also the matter of consistency, as keeping one on the floor at all times allows the team to play the same style for an entire game. The simplicity of swapping Derrick for Dejounte and Patty for Bryn has its own allure. Still, if Patty and Bryn can play together with all the ensuing defensive sacrifices that entails, it’s hard to imagine how bad the fit must be if Derrick and Dejounte can’t.

Whatever the reason is right now, if the two don’t share the court at some point in the near future, it’ll be cause for concern. Were the team to commit to playing a little smaller, it could easily find time to take a look at Dejounte and Derrick with some combination of Marco, DeMarre and Rudy at the 3 and 4, which would offset any spacing concerns regardless of who played the 5. It’s only been three games, so that may well be in the cards, but at some point, choosing not to do so sends its own message.

It’s understandable why the Spurs have continued to start LaMarcus and Jakob together, and were there not so many other issues tied to having so much depth, it likely wouldn’t be given a second thought.

It’s easy to forget, but a similar issue limited Jakob’s minutes early in the 2018-19 season as he played less than Pau Gasol through each of the first 9 games before Pau was forced to sit out due to injury. That opportunity allowed Jakob to show just how impactful he could be, which resulted in Pau’s eventual trade to the Bucks. Jakob’s situation is a good reminder that it’s a long season, and a lot can and will happen.

Still, rolling with the combination that helped take the 2-seeded Nuggets to 7 games last season shouldn’t be a controversial decision. But with so many other players up and down the roster that deserve minutes, it already is.