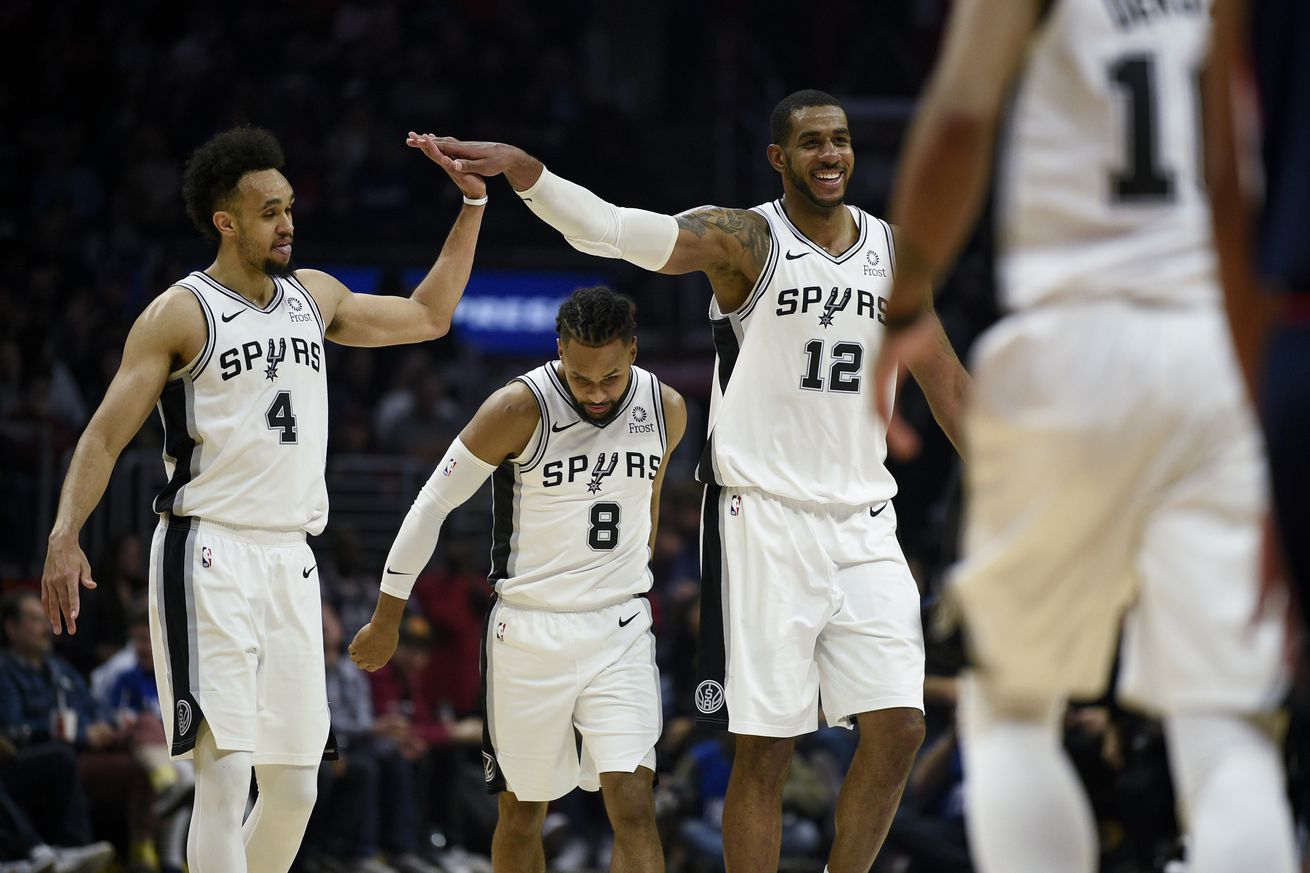 With the playoffs just a couple of months away, here are some points of emphasis as the Spurs look to finish the season strong.

At 33-26, the Spurs are coming off an extended (and much-needed) break and looking to welcome Derrick White back into the fold. They boast the league’s sixth-best offense and are on pace for 46 wins despite losing their other starting point guard for the year to an ACL tear. Even after losing four of their last five, things could certainly be worse in what has been, by all accounts, a down season in San Antonio.

That said, there are still ways the team can improve its situation and position itself to not only extend the franchise playoff streak but make a bigger splash than last year’s gentleman’s sweep at the hands of the future champion Warriors.

Five months ago, few would’ve guessed that the second-year guard would become an essential piece of the Spurs’ puzzle, but a bounce-back for the team seems contingent on White’s fully healthy return from his plantar fascia injury.

It starts on the defensive end, where the Spurs’ defensive rating is 105.8 when he’s on the floor (which would be good for 6th in the NBA) and 112.2 when he’s off. No other Spur can set the tone at the point of attack like White can, and he’s one of the few with the length and quickness to make plays that can swing a game on that end of the floor. That he can also set the table for one of the league’s best offenses is what makes him special.

White is integral, but so is basically everyone else on a team whose parts aren’t especially interchangeable. They’re 4-7 when Rudy Gay sits; Davis Bertans has the best net rating; less Marco Belinelli or Patty Mills means more Dante Cunningham, who owns by far the worst net rating of all rotation players at -8.9.

Lock in the 9-man rotation

I’ll let you read Paul Garcia’s piece on what he calls the Spurs’ Core 9 — the starting five of Forbes, White, DeRozan, Gay and Aldridge, plus Mills, Belinelli, Bertans and Poeltl — for you to see all the numbers and analyses but, suffice it to say, the team has a pretty good thing going with a #fullsquad intact. If they’re to rediscover that swagger they showed in December, it’ll probably be with a simplified rotation built around that group.

You know who played all of one game during the Spurs’ super December run? Pau Gasol. Know whose minutes peaked at 18.9 that same month? Poeltl. This summer we’ll have to give this article, written just 13 months ago, the Viking funeral it deserves, but Poeltl has been the Spurs’ second-best traditional big this season — and it’s not even close. Despite being the only rotation player who hasn’t attempted a three this season, Poeltl has found a niche as the bench unit’s pivot, helping the team’s perimeter-based attack as a rim-runner and passer out of the high post.

Poeltl has developed chemistry with Patty Mills, who he’s played 504 of his 814 minutes with, second only to Marco Belinelli. The Poeltl-Mills duo has a +8.9 net rating, and no one has assisted the third-year big more than the Aussie.

The Spurs are 20-7 at home, where they’ll play slightly more of their remaining games (12 of 23). Related: the road should still be considered a nightly crapshoot until proven otherwise. That means the Spurs will need to hold serve against some tough visitors, including the Warriors, Blazers, Thunder, Bucks and Nuggets.

Related: Make sure to beat the Kings at the end of March

The March 31st tilt versus 9th-seeded Sacramento also looms large, with the young, well-coached group showing plenty of resilience in a competitive West. Fortunately the game is not only sandwiched between two others at the AT&T Center against tanking squads (Cleveland and Atlanta) but will also be a SEGABABA for the Kings, who play Houston the night before.

Stick to what you do best

Until they can once again hang their hats on a stout defense, the formula for what makes this team go boils down to a more abstract principle: “discipline.” That involves winning the turnover, rebound, and free-throw battles, and continuing to dictate the pace of a game.

Another part of the winning formula? Remain an inside-out offensive team and not the other way around. The Spurs are 23-10 when they attempt 26 threes or less in a game. Part of that is because they’re not having to shoot their way from behind, but it also has to do with a style predicated on their stars’ talents and the shots that stem from them. Yes, Aldridge’s post-ups, DeRozan’s isos and Rudy Gay’s contested pull-ups are ostensibly lower-efficiency looks, but they put offensive possessions on a track that either create better looks (like quality three-pointers) or bottom out as acceptable attempts for their scorers.

Get DeMar DeRozan back on track

You can look at DeRozan’s numbers going back to December 31st — 17.6 points and 3 turnovers per game on 42.1% shooting (versus 22.9, 2.4 and 47.7% before then) — and assume something’s changed, between his health and usage, but you’ll need better luck than I had in determining exactly what that was. From his touches on the floor to his average dribbles taken to how much time is on the shot clock when he’s typically shooting, there’s not been a considerable shift in what DeRozan is doing. Even his on/off splits with the playmaking White — whose ascendancy has been the biggest shake-up that’s impacted DeRozan — don’t point to anything meaningful.

Sometimes the root cause is hard to find, and sometimes a slump is just a slump. Either way, the Spurs can’t be the best version of themselves with their star guard struggling as he has, and it may take him going deeper into the crevasse, remaining aggressive and doing what he does best, before he can find his way out of it.

I asked Gregg Popovich in mid-December about Aldridge, trying to understand a) if he considered him a player that’s especially dependent on finding his rhythm and b) what a team can do to nurture that process. His answer hinted at it being an organic dynamic as much as anything, with his three go-to scorers intuitively keeping each other involved.

“We gotta make sure we distribute it,” he said. “[Aldridge, DeRozan and Gay] are such unselfish players that they pretty much do it on their own. After free throws, timeouts, dead-ball situations, I just have to evaluate who needs the ball at the time, and consider matchups, that sort of thing.”

Unlike DeRozan, there have been some changes with how LA’s been used, including trading pick-and-pops for more touches on the left block and involving him more in the offense as a facilitator. It’ll be worth keeping an eye on if anything similar happens out of the All-Star break with all the time the coaching staff has had to digest the season’s first 59 games. Whether adjustments are made or not, a return to form for the All-NBA guard will be most welcome.