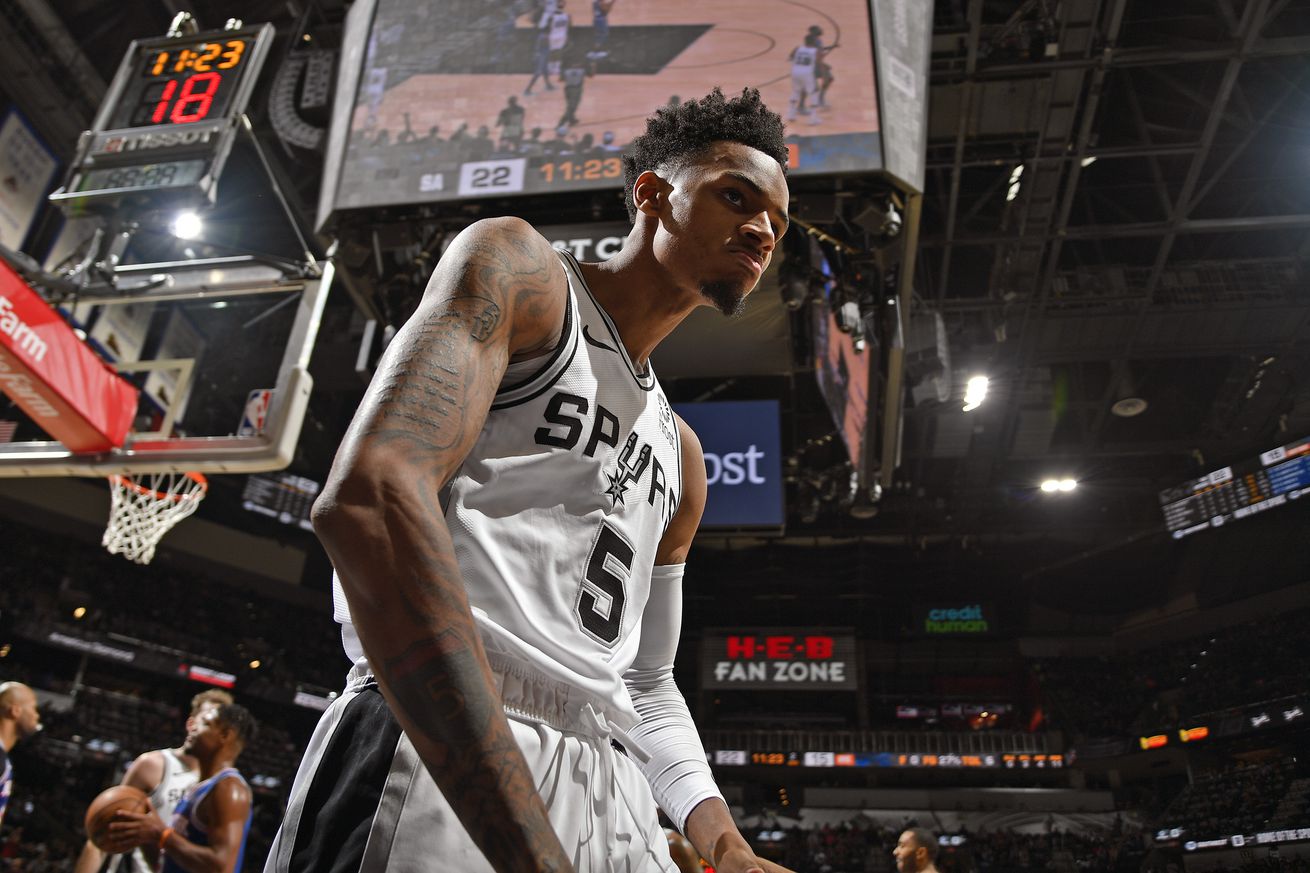 A look back at San Antonio’s top performance of the week.

This is the first of a weekly series highlighting the Spurs’ best individual performance of the previous seven days. This week’s focus is on Dejounte Murray, who showed us a lot in his first game back from injury, as well as what we can expect from him through the rest of the season.

Dejounte Murray has come back to the NBA in a big way. After missing all of last season with a torn ACL, he returned to the Spurs playing the best basketball of his young career — by far. His elevated level of play began on the team’s opening game of the season against the New York Knicks.

Murray was restricted to just 24 minutes on opening night. Despite the limited playing time, he performed like a superstar from start to finish against New York. He finished with 18 points, eight rebounds, six assists, and three steals while shooting 7/10 from the field and 1/1 from three. It was a mic drop performance — a brief one because of the minutes restriction — but a mic drop nonetheless.

Prior to his injury, Murray was a promising young guard who was already an All-NBA level defender. He has come back looking like every bit as elite of a defender as he was before the missed time.

These two plays put on display just what has made him such a daunting defender. On top of his always stellar on-ball defense, Murray has combined his long frame with an unteachable level of anticipation and defensive instincts to bring in steals and deflections at a high rate.

He currently sits at 12 total defections, tied for ninth highest in the NBA. The only player above him on this list with fewer minutes is Matisse Thybulle: probably the only man in the NBA who might be more of a defensive freak than Murray. Outside of Thybulle, everyone else on the list has between 21 and 86 more minutes played than Murray, who has logged his 12 deflections in less than 70 minutes.

For sake of comparison to his last healthy season, Murray is currently averaging 6.3 defections per 36 minutes, the fourth best in the NBA. In 2017-2018, when he finished second team All-Defense, he registered just 3.5.

While it is just a three game sample size and is subject to some regression, it appears that one of the league’s best defensive players may have become even more devastating of a presence since the last time he was healthy.

Of note, in both of the two highlights above, Murray’s steals led to scores in transition. That was a recurring theme in his performance against the Knicks, and his one-man-fast-breaks have been a main factor in the Spurs playing at a franchise-best pace.

He has used his speed, rebounding ability, and knack for slithering his way to the rim to make himself a lethal transition player. Here, he gets the rebound and makes his way to the rim so quickly that Dennis Smith Jr. has no chance of recovering from the meanest of double crossovers.

Last season, the Spurs played slow. Slow and deliberate. They ranked just 22nd in pace and rarely got out into transition. Here are some of their transition numbers from last season, per Cleaning the Glass:

These are pretty unremarkable, especially the volume of transition possessions — 97% of the league had more opportunities to get an easy basket than last year’s Spurs. Yuck.

The good news is that Murray’s work is turning that problem on its head. Here are San Antonio’s numbers this year with Murray on the court:

Murray has helped them get out in transition more often — and teams score more efficiently once they get out running. In the minutes Murray has played so far, the Spurs have been the best transition scoring team in the NBA . They now sit 8th in the NBA in pace, and it showed against the Knicks. (More is coming later today on the impact Murray’s transition game has had, so stay tuned.)

But it’s not just his defense and speed, although both are attention-grabbing; Murray has evolved as a finisher.

The way he hits Smith with yet another crossover, leaving him in the dust as he waltzes to the rim unfazed, is one of many examples.

But we already knew Murray could use his speed and agility to get around defenders on the perimeter. What has truly been shocking and has shown the work he put in over the last year has been how well he’s finishing through traffic and contract, like in this play against Taj Gibson.

Along with his jumpshot, this was one of Murray’s biggest weaknesses as a scorer. He was a bit too weak and easily pushed around at the rim by opposing defenders. Not this year. He’s developed the necessary skills and strength needed to weave around rotating bigs and get up and finish through contesting defenders.

In 2017-2018, Murray took 46% of his shots at the rim and made 55% of those attempts: among the worst in the league. So far this year, he’s attempted 66% of his shots in that area and has made 81% of them. That improvement is not a typo. Eighty-one percent. That is a bonkers level of improvement that’s encouraging even if that number slips somewhat as the season wears on.

The ability to finish at the rim and create easy points at the charity stripe is a necessary element to any elite scorer’s game. Murray appears to be trending in the right direction, to put it lightly. If he keeps this up, the Spurs’ ceiling is certainly higher than most expected.