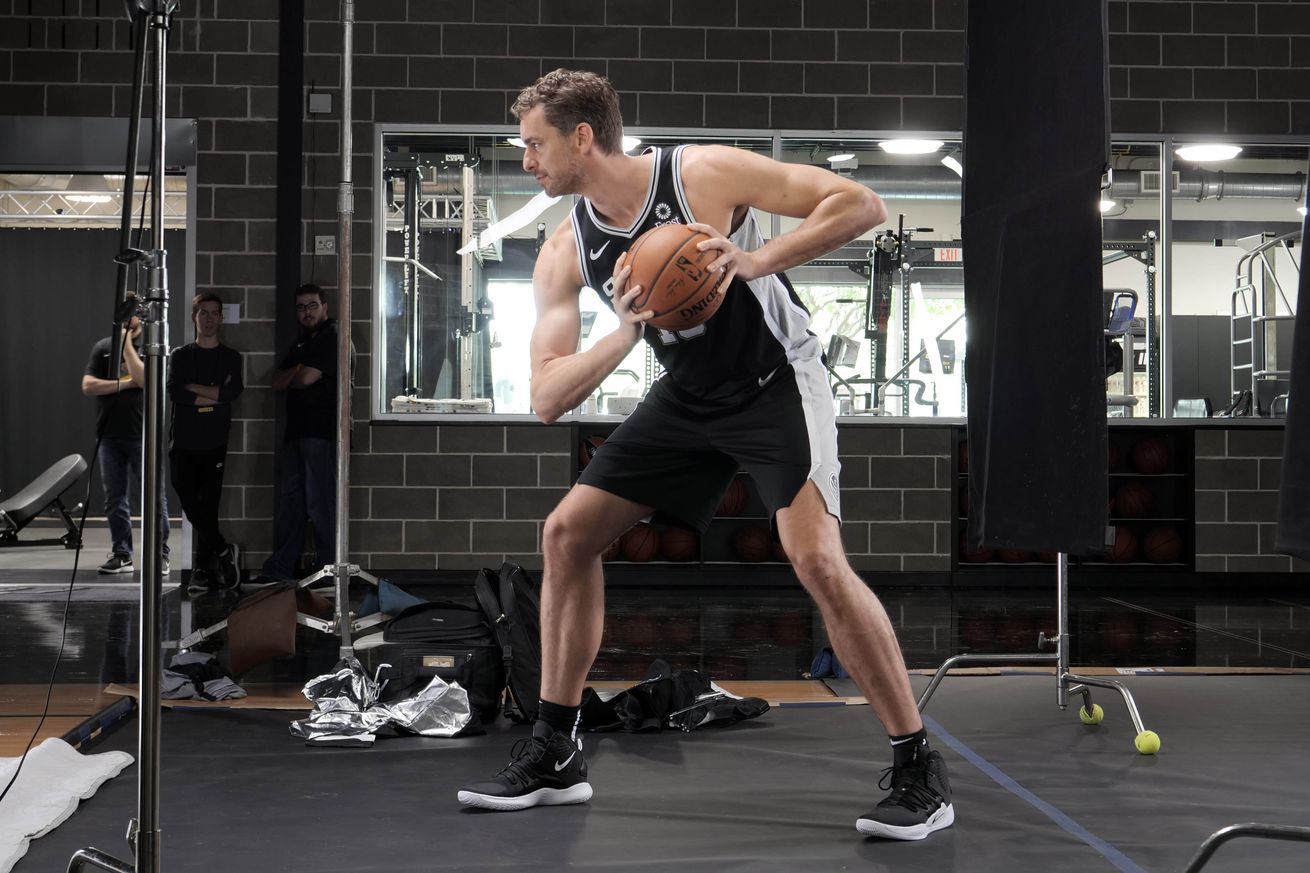 A little scrutiny and a guess as to where things are headed.

Will Pau start or come off the bench? Will Rudy be a small-ball PF? Who is the backup PG? “We don’t have anything in stone,” Pop said. “We don’t know who our starting team is or who the first guys off the bench are going to be. That will become apparent to us as we move along.”

The uncertainty makes sense given the makeup of the roster, with an offensively limited young point guard, two scorers who also don’t exactly space the floor, and a pick-and-mix of tweener forwards, combo guards and seven-footers to slot into the other two spots (with DeMar DeRozan, Dejounte Murray, and LaMarcus Aldridge’s spots ostensibly secure). The pieces won’t all fit together well, and it’ll be up to Gregg Popovich to figure those combinations out in time.

Of course, the five that tip off with against the Timberwolves on October 17th won’t matter as much as the group they turn to months down the road, or the closing lineups they roll out in March and April. More than anything, the opening-night starting five should reflect the group Pop trusts the most right now, and who can lay the groundwork for the player development and roster alchemy that will hopefully follow. Here are some preliminary questions that could shape that decision.

Does this team have a natural small forward?

The irony of the increasingly positionless NBA is that the archetypal player to thrive in it — a 6’7” two-way wing who can shoot the three and at least make life difficult for a Paul George, is pretty hard to come by. It’s also precisely what this team is lacking after this summer.

The team’s depth chart on ESPN team currently shows Rudy Gay slotted at the three, followed by Marco Belinelli and Quincy Pondexter. According to Basketball Reference, Gay logged 84% of his minutes at the power forward position last season, up from 38% in 2016-17 and 24% in 2015-16. His recovery from 2017’s Achilles injury may be close to complete, but the 32-year-old’s transition to full-time small-ball four may have been a foregone conclusion anyway. The same march of time has pushed the smaller Belinelli to spend more time at the three than the two, but he’s better suited to a bench role, and will still need to be hidden defensively. The non-guaranteed Pondexter will need to earn a spot on the roster, then the rotation, before being in consideration for the starting three spot.

It may be necessary to answer the initial query with another question: does it matter if the Spurs don’t have a true small forward? Last season, Pop turned regularly to three- and occasionally four-guard lineups when matchups allowed for it. He also occasionally played Aldridge with a pair of tweeners (two of Gay, Davis Bertans and Kyle Anderson). Traditional positionality didn’t matter — what did was how the skills on the floors complemented each other. The same applies to this team.

The most obvious move to start the year may be sliding DeRozan up a spot and use the two-guard vacancy to make up for whatever deficiencies the other four players have.

Should the Spurs integrate DeRozan first, figure out spacing later?

Gay’s natural role these days is to match up with opposing fours. He started there in the playoffs against the Warriors, but it came with a group of floor-spacers that included Patty Mills and Danny Green. Whether it’s his long-term role will depend on his fit alongside Murray, DeRozan and Aldridge who, as mentioned before, are not known for their three-point acumen. Neither is Gay, making that talented foursome’s plus-minus an interesting one to follow as the season goes on. They could comprise some of the better closing lineups the team will turn to.

The Spurs will want to beta test that compatibility early on, but there are catches to doing so early with the starting lineup. For one, the sub-optimal spacing could hinder DeRozan’s integration, and it won’t do any favors for Murray’s development, either. Sliding Gasol to the bench could lead to other rotational questions, namely:

Can Pau and Poeltl coexist on the floor?

We know that Pau Gasol is at least open to the idea of transitioning into a full-time bench player at some point in the future. He’s done so in both of his seasons in San Antonio, after all. Meanwhile, the former Raptor, Jakob Poeltl, logged all of his minutes last season at center (0 alongside the stony Jonas Valanciunas) and, like Pau, is used to taking on the less-mobile opposing big. The duo could absolutely make for some clunky, throwback fun — especially around January when the season hits its inevitable lull — but is Pop ready to accept that as part of his early-season rotation?

This is another bridge they may want to cross as the season goes on, with Gasol and Poeltl’s minutes staggered and the former kept in the starting spot where he and his teammates are most comfortable.

How confident does Murray look running the offense right now?

Any offensive leap Murray makes in year three will make things easier on the Spurs. If he becomes a reliable stand-still shooter, his man won’t be able to help off him so brazenly. If he can be a threat pulling up off the pick and roll, the game opens up for everyone else. And if he starts making next-level passes off the dribble, reading defenses, and seeing plays before they develop, the team won’t need to rely on secondary ball-handlers to shore up his still-burgeoning point-guard skills.

Who knows — Murray may show in the preseason that he’s truly ready to run the show, and with a better jumper to boot. If Pop’s not yet convinced, keeping Patty Mills in the starting lineup solves a number of problems at once.

The ideal starting lineup on opening night may not be the one with the highest ceiling, but the highest floor — a group that’s familiar with each other, defensively sound, and that can smooth the learning curve as much as possible for a team with plenty to figure out. It’d make sense for that to look something like Murray, Mills, DeRozan, Aldridge, and Gasol. Hopefully with player development and improved chemistry across the roster, better options reveal themselves as the season goes on.