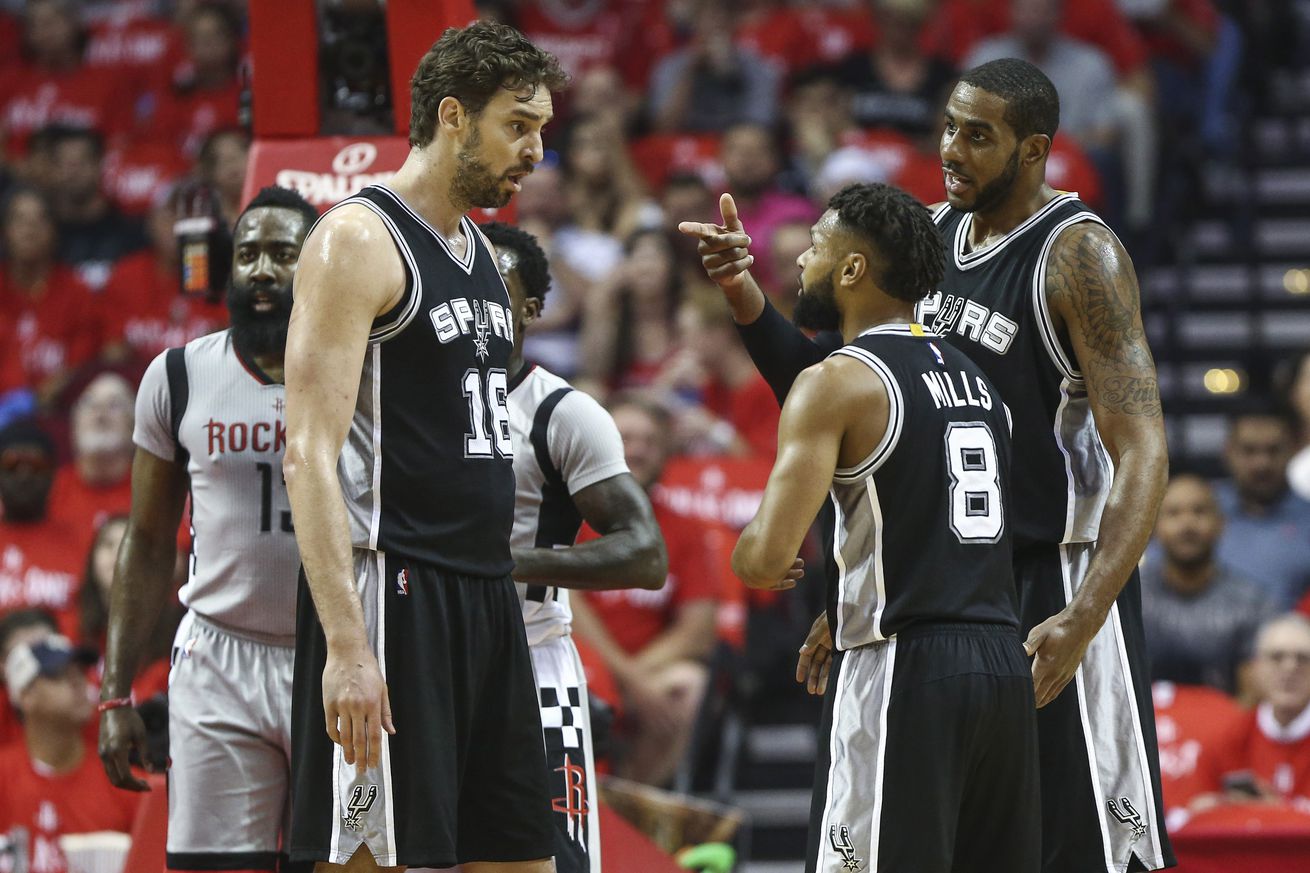 Pop might need to experiment before finding the right combinations. Hopefully, he’ll figure it out before the season starts.

The bigger question for the Spurs heading into next season may not be talent so much as how the talent is able to play alongside one another.

DeMar DeRozan is one of the league’s best shot creators, someone who can get a bucket on command or make the defense collapse consistently. He’s exactly the type of perimeter threat San Antonio needs to complement LaMarcus Aldridge’s interior scoring. That gives the Spurs two linchpins around which to build successful lineups. Unfortunately, their other pieces don’t seem to fit seamlessly with their stars, which will make it difficult to put together a starting unit that could excel on both ends of the floor.

As a result, for the first time in a while, training camp and preseason might actually matter for the Spurs. The margin for error between making or missing the playoffs will be slim, and Gregg Popovich will want to find core combinations that work before the season starts.

Arguably the most glaring issue with this roster is a notorious lack of shooting in the projected starting lineup. If Dejounte Murray, Rudy Gay and Pau Gasol fill the other spots as expected, the Spurs will have zero above-average outside shooters in that unit. Efficiency could be an issue, but also volume. Last season DeRozan was actually the most assiduous shooter of the bunch. That lineup would have to score incredibly efficiently on two-pointers and get to the line a lot in order to make up for its lack of three-point shooting. It might be hard to do that while operating with constrained spacing, even with DeRozan around.

The Spurs faced this issue last season, albeit to a lesser degree. The starting lineup of Murray, Danny Green, Kyle Anderson, Aldridge and Pau Gasol attempted just 15.8 three-pointers per 36 minutes and converted them at a 32.7 percent rate, numbers that would have ranked dead last in the league. Unsurprisingly, that unit struggled greatly to score. Gregg Popovich found a fix by inserting Patty Mills in place of Danny Green. Mills is a much more versatile shooter who can hit on the move, which proved to be a lot more valuable a skill than Green’s spot up shooting. That tweak resulted in an almost 20-point improvement on points scored per 100 possessions and helped the Spurs reach the playoffs.

The success of that lineup gives Pop a blueprint to follow to make a unit with four mediocre outside threats work. Unfortunately, putting it in practice this season would mean going away from the projected starting lineup. One of the options is to make Mills the starter and keep DeRozan and Gay in the two wings spots. It’s an intriguing possibility, considering DeRozan took a leap while sharing the court with a point guard that could shoot in Kyle Lowry. They could also keep Murray in the starting lineup but switch Gay for Marco Belinelli, sliding DeRozan up to small forward. Belinelli is more similar to Mills than to Green as a shooter, as he can score while moving off the ball. The Raptors found some success with DeRozan at small forward on two point guard lineups featuring Lowry and Fred Van Vleet, so it wouldn’t be crazy to try to replicate it.

Both possible solutions have serious defensive drawbacks, however. Starting Mills seriously limits the Spurs’ defensive versatility. Unlike Murray, Patty can only guard point guards. Since Rudy Gay can guard only small forwards, DeRozan would have to take the smaller wing, no matter who it is. The switching would also not be seamless across the three positions. As for starting Belinelli, it would mean being small and not physical at all at the wing. DeRozan can spend some time at small forward but he simply doesn’t have the strength to do it full time against the best in the league. Both the Mills – DeRozan – Gay and the Murray – Belinelli – DeRozan should be heavily used perimeter trios against backups, but neither appears like ideal starting lineups options.

There’s one other option that could provide the Spurs’ starting unit with enough shooting and spacing to function. By starting Davis Bertans at power forward and moving Aldridge to center, the Spurs could likely get away with having three bad shooters in the perimeter. Bertans is a sniper both spotting up and on the move who could make a leap in his third year in the league. Aldridge is a mediocre floor spacer as a power forward, but as a center, his mid-range shooting prowess is enough to prevent big men from parking in the paint. The starting unit with those two at the big men positions did very well on defense but didn’t excel on offense last season. A lack of perimeter playmaking is probably partially to blame for that, however. With DeRozan around, it might work better.

A lot of lineups might improve on offense with DeRozan in the mix, to be fair. That’s why the Spurs should probably begin their preseason with the Murray – DeRozan – Gay – Aldridge – Gasol starting lineup as Plan A. It’s their best hope of putting together a core unit that maintains the defensive identity based around size in the paint that the team has developed in recent years while also boasting enough scoring, if a few things go the Spurs’ way. Marginal improvement across the board in terms of shooting might be enough to fuel a workable offense. Aldridge saying he’s been improving his three-point shooting bodes well. Someone else will have to become a threat for the projected starting lineup to work. Otherwise, tweaks might be needed and will need to be swiftly implemented.

This is going to be a challenging year for Popovich. There are several new pieces he’ll have to incorporate and not all of them fit seamlessly together. He’s going to have to find balanced units featuring one-way veterans and unproven young players, not an easy task.

The good news is that there’s enough talent around to make things work. Figuring out which starting unit is best and which core lineups to deploy consistently might be tough, but it won’t be impossible. If anyone can do it, it’s Popovich, a master in getting the most out of limited players.

The margin of error in the unforgiving West, however, will be slim. The Spurs can’t afford a slow start. Pop will have fallback options if his preferred units falter. Hopefully, he’ll figure out what works before the season begins.