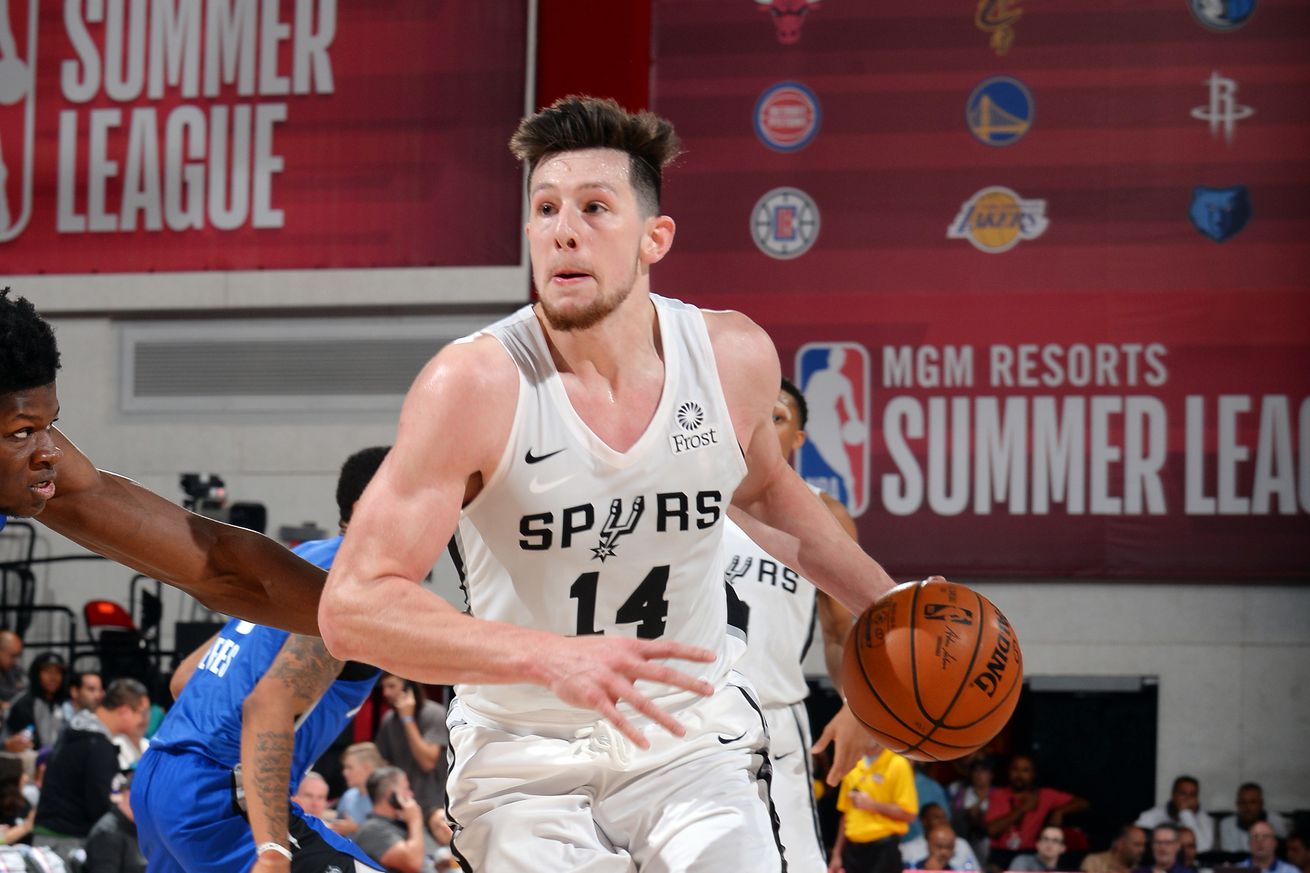 How DrEwbanks could be sneakily important to the Spurs’ success this season.

The Eubanger better be ready. As much of the rest of the league prepares to re-embrace the two big lineup, the Spurs find themselves employing just two players who’ve spent significant NBA minutes at center. That could mean the undrafted second-year player out of Oregon is in for a busy year.

Drew Eubanks is on a two-way contract, so he’ll be limited to 45 days in the big leagues, but given the other options, there’s a good chance the Spurs use every single one of them. Aside from LaMarcus Aldridge and Jakob Poeltl, the only other players on the roster with the potential to defend traditional centers at all are Trey Lyles and Chimezie Metu. Trey has never spent more than 10% of his minutes at center in any of the 4 seasons of his career, per Cleaning the Glass, and Chimezie split what little time he played in his rookie season pretty evenly between center and forward.

That leaves Drew as the most likely candidate to fill in should either LaMarcus or Jakob need to sit out, whether for rest or to recover from an injury. While both have been very durable, missing just 13 games combined over the last 2 seasons, it’s not hard to imagine a scenario where Drew gets called up for a few weeks to man the battlements in a time of need.

There may also be a real, tactical need for another big body. Just in the upper half of the Western Conference, the Clippers, Lakers, Nuggets and Trail Blazers all have viable two-big lineups that could present problems for the team. If the Spurs find themselves in a position where they need to have both LaMarcus and Jakob on the floor to defend an opposing lineup, as they did in their series against the Nuggets last year, it will be difficult to keep one of them on the floor the entire game. If the opposing team has depth at the 5, as those teams do, the Spurs will need to find an answer.

That could be Trey, but based on his stints in Denver and Utah, the Spurs shouldn’t pin all their hopes on him morphing into that type of player overnight. Fortunately, Drew is ready for the call. He was already showing signs of that potential last spring with a fairly decent impression of a rim-running roll man and enough size and athleticism to patrol the paint and not get burned on the perimeter.

One of the issues he needed to work on at the time was screen setting, as he tended to slip out a beat too early, especially when he saw an open lane to the rim. But he showed much better timing and feel on his picks in Summer League. It will be interesting to see how he fares in that respect in preseason. If he can demonstrate good chemistry with a couple of the team’s ball handlers, it will go a long way towards allowing him to replicate some of what makes Jakob successful on the offensive end.

Drew isn’t going to suddenly develop Jakob’s touch around the rim, but he’s enough of a threat on the roll to at least force defenses to pay attention, which is important, because that’s about the only way he’s going to score. He ought to be a decent rebounder on both ends of the floor, at 6’10” with a good frame, but that has only really translated on the defensive side, where he averaged over 11 boards per 100 possessions in both Austin and San Antonio last season.

He hasn’t been nearly as successful at snagging second chances, though. Drew grabbed a little under 4 offensive rebounds per 100 possessions in Austin last year, well below Amida Brimah, Ben Moore and DeJuan Blair, who all got close to or over 6 per 100. Worse, Drew managed just 6 offensive rebounds in 113 minutes (236 possessions!) with San Antonio and didn’t score a single point off a putback in that time.

That wouldn’t be so concerning if Drew’s role kept him out on the perimeter for most of the game, but he primarily sets screens and rolls hard to the basket or hangs out in the dunker spot, meaning he should frequently find himself in decent position. Jakob plays a similar role, for instance, and pulled down 6.89 offensive boards per 100 possessions last year. It’s fair to point out that individual rebounding numbers aren’t as relevant as impact on team rebounding, but Drew doesn’t do any better by that measure. The Austin Spurs grabbed 34.7% of their own misses with Drew off the court, and just 30.3% when he was on the court.

He does well at defensive rebounding because that’s more about holding a position and securing the ball. Offensive rebounding is a different animal, requiring more anticipation and the ability to beat multiple people to the ball. Drew struggles there because of his average wingspan and general lack of feel for how it’s is going to come off the rim. He just doesn’t end up in the right place very often, and even when he does, rarely gets his hands on the rock.

The trend towards giving up on offensive rebounds in favor of getting back on defense is well documented, and the Spurs have fully embraced that philosophy, grabbing the lowest percentage of their own misses of any team in the league last season. But at the individual level, Jakob Poeltl still had a significant impact on the team’s offense through second chances and putbacks. With a similarly limited offensive repertoire, Drew would be much more valuable on the court if he could shore up that hole in his game.

Aside from setting screens and rolling, Drew also has the ability to hit hooks with either hand off the dribble or out of a post-up. They aren’t especially pretty, but he made 11 of his 16 attempts in the NBA last season, though most came in garbage time against reserves or smaller players. He went 83/137 on hooks in the G League, which is encouraging, but probably won’t amount to much in NBA action because the Spurs won’t be tossing the ball in to Drew on the block all that often, if ever.

He deployed a semi-Euro wrong-footed left-handed hook in Summer League, which went about as well as you’d expect.

As nice as it is to see that sort of agility and creativity from the young big man, let’s hope that particular move stays in his practice bag when the season starts.

You can also safely ignore the workout video of Drew drilling threes in an open gym. Until the Spurs have him pick and pop in a game situation, it’s safe to say he’s not a threat from deep. It’s always easy to get excited about summer workout clips, but remember, practically every NBA player can shoot the lights out with no defense.

A more important part of his game that already translates is his ability to attack the defense out of a setup for a handoff.

It makes sense to have his defender drop and the potential ball handler’s defender go over to prevent the three, especially since Drew isn’t much of a threat to shoot. But just the possibility of him attacking a sagging defender complicates how the defense reacts to the handoff action, whether stationary or off the dribble.

On the other end of the court, at 6’10” and 245 lbs, Drew is big enough to bang with traditional centers, but still quick enough to survive on the perimeter. If he’s matched up with an elite big man, like Nikola Jokic, for any length of time the Spurs will have to send a ton of help, but he should do just fine against most rotation bigs. The same can be said of his ability to handle switches and deal with penetration: he’s good enough to hang in and make some plays but will likely get exposed against the best ball handlers.

He’s good for a highlight reel block about once a game or so, but he’s not a defensive stopper and he’s not going to lock anyone up. But that’s not really what the Spurs will expect from him. Drew just needs to hold his own against backup centers without killing the offense while LaMarcus and/or Jakob catch a few minutes of rest, something he is well equipped to do.

At just 22 years old, Drew still has room to improve, but his ceiling probably isn’t much higher than the “just in case” big role he’ll likely get to fill this year. Even were he to improve his interior defense and offensive rebounding, he likely wouldn’t move much beyond that with the Spurs simply due to a lack of opportunity. For the moment, though, what the Spurs need from Drew and what he can actually do are pretty much the same thing.

*If that three-point shot turns out to be real after all, you can forget that whole last paragraph*

The Spurs may need Drew Eubanks to be ready to help
Source: Pounding The Rock