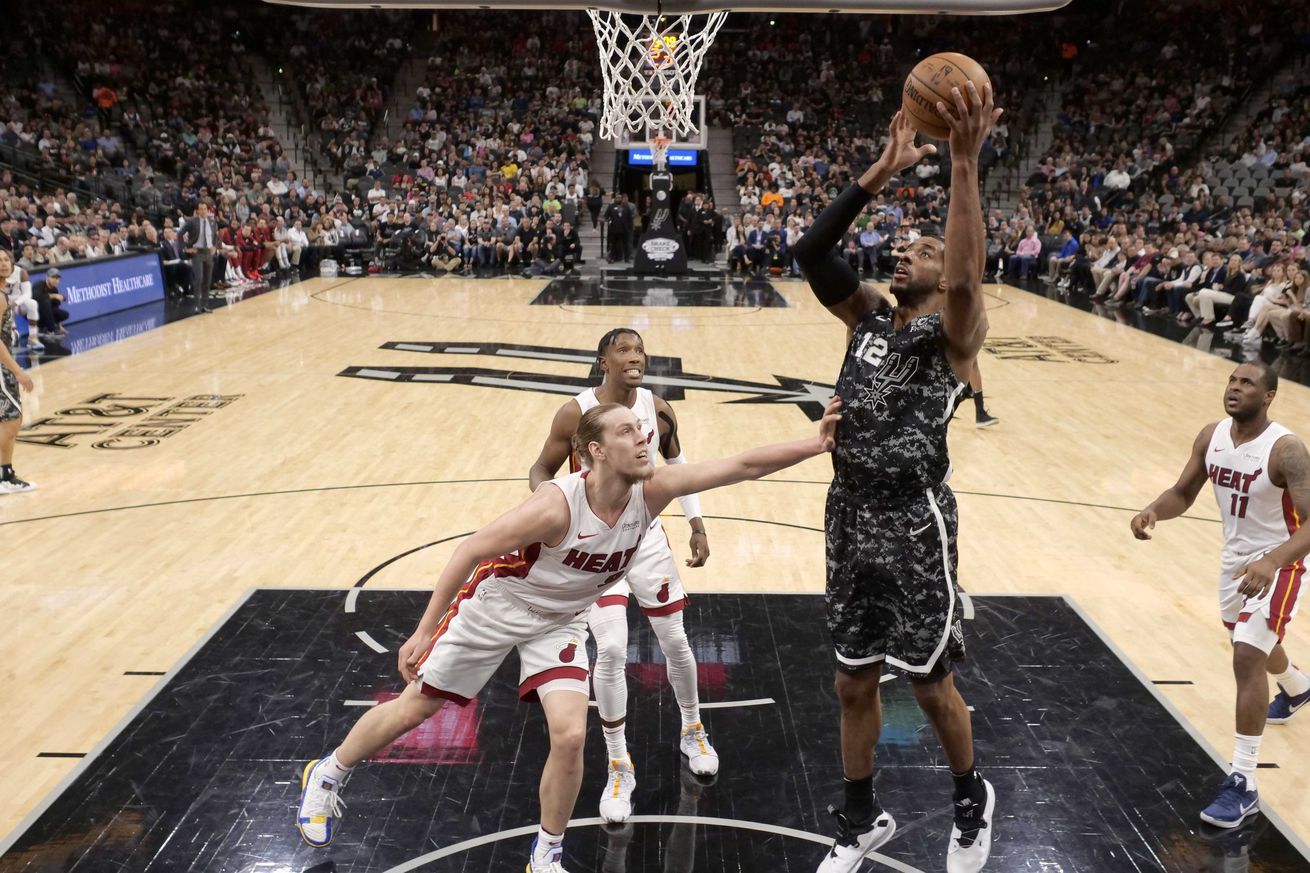 Despite the loss, the Spurs showed an ability to bounce back and adjust.

The Heat snapped the Spurs’ 9 game winning streak on Wednesday night thanks to aggressive, physical defense and some very hot shooting. For their part, the Spurs were a game opponent, fighting back from an 18 point deficit to make it a one-possession game with just over two minutes left.

It was clear right from the jump that the Spurs’ offense was in for a battle. Miami’s defense held the Spurs’ starters + Rudy Gay to just 8 points in the first 8 minutes on 4/18 shooting. It’s tempting to say those were just missed shots, but the Heat’s defense had everything to do with it. Whether playing man-to-man or zone, the Heat challenged the Spurs at every turn, conceding mostly out-of-rhythm and rushed attempts. Even the easy looks wouldn’t fall early in the game.

The Spurs shot 3/12 against the zone over that time, made 1/5 against a set man-to-man defense, and went 0/1 in transition. Good zones, like defenses that switch well, are an insidious poison that kill the offense in a number of ways. Because they require a different approach, teams will frequently become hesitant and unsure, and end up taking awkward and ill-advised attempts.

The challenge of attacking a zone can produce some interesting decisions, but it can also produce moments of brilliance. The Spurs’ last possession against the zone in the first quarter was one of those.

It seems a simple play, but DeMar DeRozan’s mid-air change of mind to loft it over Bam Adebayo instead of taking the floater was brilliant. Very little was falling for the team, and giving the Spurs’ big man an easy lay in for a certain 2 points was as creative as it was necessary.

Whether because the Spurs appeared to be getting the hang of the zone or due to substitutions, the Heat went back to man defense for the next 13 minutes of game time. Patty Mills and the Spurs’ reserves fought there way back into the game, taking the lead briefly early in the 2nd. It didn’t last long, though.

Even with the Spurs having taken the lead, the Heat stuck with their man-to-man defense. Over the ensuing 7 minutes, they built a 13 point lead by repeatedly getting to the free throw line and hitting 5 of their 6 above-the-break threes. The Heat’s zone helped close out the half, but the lead was built on three-pointers and hard-nosed man-to-man defense.

The Spurs’ offense came to life in the 2nd half, as they put up 58 points, and eviscerated the Heat’s zone in the 4th quarter to the tune of 15 points on 9 possessions. But it wasn’t quite enough to overcome the Heat’s hot hands. Miami was just the 6th Spurs’ opponent this year to shoot over 50% on above-the-break threes. Unsurprisingly, the Spurs have lost all 6 of those games.

The Spurs managed a respectable 110.53 points per 100 possessions, a few points short of their season average, but they needed just a little more. They’ve struggled against the zone at times this year, particularly in the 1st half of their victory over the Nets at the end of January, and have long had issues with physical defenses that can disrupt their balance and timing. This game was a fair example of both of those issues.

Still, they’ve also shown they’re capable of scoring effectively against those very same teams, and but for some hot shooting, could have easily turned this game into a win, too. That’s a good sign that, at least at home, the Spurs’ spring-time renaissance continues.