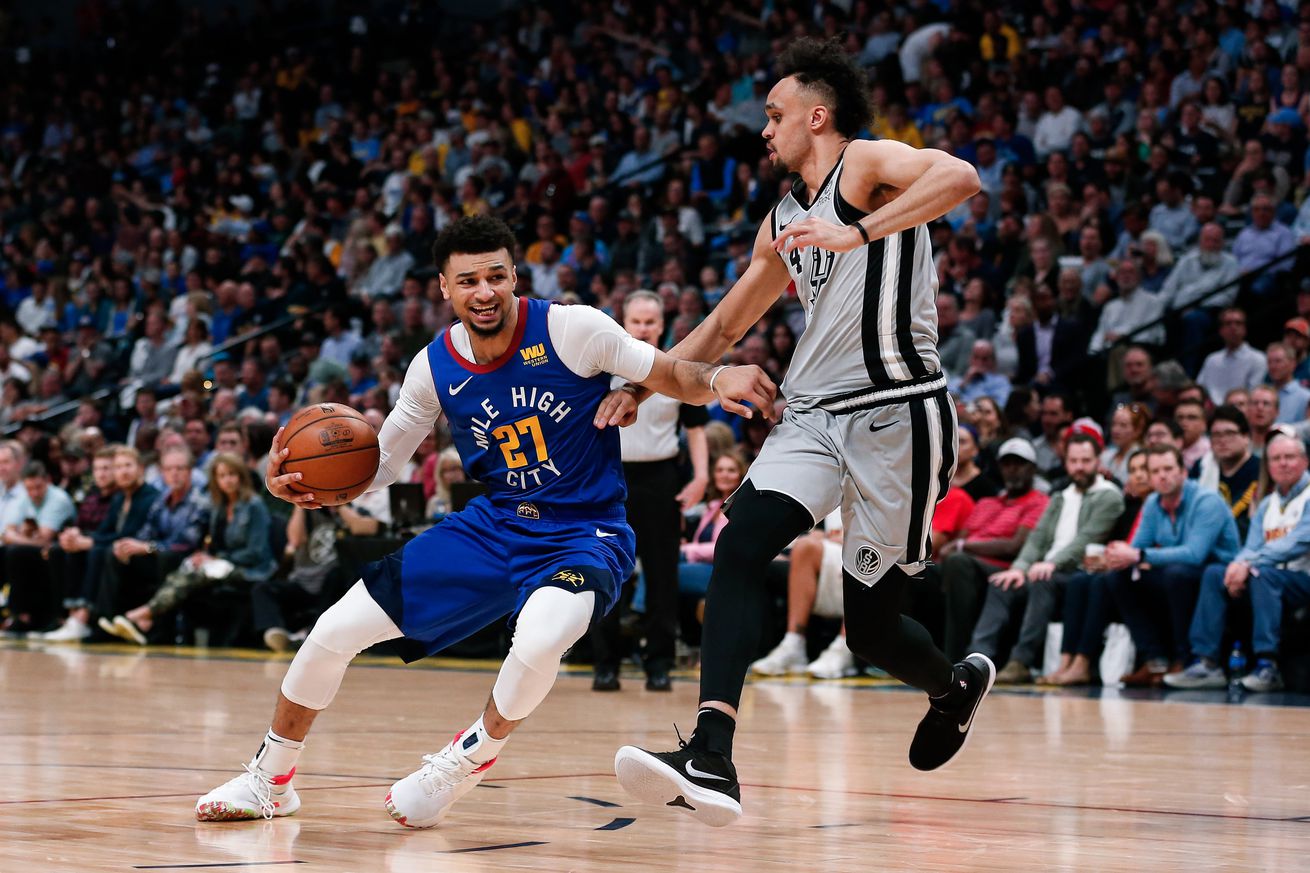 On a night where the Spurs needed to be at their best, they played one of their most undisciplined games of the last 2 months. Not since the Rodeo Road Trip swoon that nearly dragged them out of the playoff race have they defended so weakly or shot so poorly.

The team’s three point shooting woes continued, but had that been the only issue, they would likely have managed to at least stay in the game. Unfortunately, the Spurs couldn’t hit layups, either. Worse, the team’s season-long scourge — awful perimeter defense — made a very untimely reappearance, and the Nuggets took full advantage.

For the most part, Game 5 looked a lot like this.

Everything’s going fine until the Nuggets get ready to post up Nikola Jokic on Derrick White. Rudy Gay gets ready to execute the kick out switch as soon as the pass is made, but nobody else is on the same page. Just as Rudy is gearing up to go, DeMar DeRozan should be preparing to zone up while Derrick recovers out to Paul Millsap, who Rudy was covering.

He barely moves, and Jokic gives the Spurs no extra time to respond, immediately firing the ball out to a wide open Millsap on the right wing. Derrick should already be on the way out to pick him up but just hangs out in the paint instead.

Gary Harris cleared out from the strong side corner as Jokic was posting up, so Bryn Forbes is trailing him onto the right side as the ball is in the air. Since neither DeMar nor Derrick are in position to contest, Bryn veers away from Harris onto Millsap. That’s a mistake, and though DeMar manages to make it over to Harris for a late contest, the shot still hits nothing but net.

If you’re scoring at home, that’s the Spurs best perimeter defender not even bothering to recover back into position, DeMar completely failing to threaten the passing lane or be in position to contest, and Bryn leaving a shooter in the corner to contest a shooter on the wing.

As bad as that is, it probably wouldn’t have mattered much on this night, because the Spurs couldn’t get anything to drop.

Derrick starts off the play by rejecting the screen and driving down the right side. Cut off from the rim, and with the Nuggets’ defenders in good position, Derrick kicks it back out to LaMarcus Aldridge at the top of the key. His quick dribble attack catches Millsap’s attention, giving Rudy an opening along the baseline.

Rudy drives, but the Nuggets’ help arrives on time, stopping him at the edge of the lane, so Rudy fires it back out to DeMar on the left wing, who has an open driving lane. DeMar gets almost all the way to the rim, but leaves the finger roll just short.

That shot was emblematic of the Spurs offense all night long. They shot just 41.7% at the rim, per Cleaning the Glass, their 4th worst mark of the season.

Then, on the very next possession, the Spurs’ perimeter defense failed again.

Just as before, the defense does fine for the first part of the possession, all the way up until Jamal Murray drops it off to Jokic in the lane, then clears out to the right corner. With LaMarcus having dropped almost to the baseline to cut off Murray, Rudy rotates over off Millsap to pick up the Serbian big man. LaMarcus switches onto Millsap, and the Spurs are on the verge of forcing the Nuggets to take a bad shot late in the clock.

They would be, that is, if Derrick hadn’t taken a moment to catch his breath under the basket. Murray is all alone on some of the most valuable real estate on the court. Luckily for the Spurs, he misses. But then the Nuggets grab the rebound.

Millsap tosses it to Malik Beasley who drives to his left right by Marco Belinelli. Rudy rotates over to stop penetration and LaMarcus hustles back to the rim. With Derrick on Jokic’s back, Beasley kicks it out to Murray, who’s now open on the left wing. Both Derrick and DeMar attempt to close out, but they’re too late and Murray doesn’t miss again.

Scrambles off offensive rebounds are some of the toughest plays to cover, but DeMar has to be more aware. For his part, Derrick should have begun recovering a beat sooner.

Each of the Spurs’ perimeter defenders made numerous costly mistakes in this game, giving up an array of open shots, backcuts and easy drives to the basket. It obviously didn’t help that Derrick picked up his 4th foul early in the 3rd quarter and had to take a seat while the Nuggets stretched their lead out to 22 points. But he made enough mistakes on the night that it probably didn’t make much of a difference in the final result.

The 125.6 points per 100 possessions the Nuggets scored before garbage time was their highest of the series. If the Spurs want to make it back to Denver for Game 7, they’ll need to start with addressing their porous defense. Assuming they can get the Nuggets’ scoring under control, they’ll still need to knock down shots, especially the easy ones.

The Spurs will need a massive improvement all over the court to have a chance in Game 6. On the upside, it’s not like they can play much worse.

The Spurs learn what happens when you play bad defense and miss layups
Source: Pounding The Rock