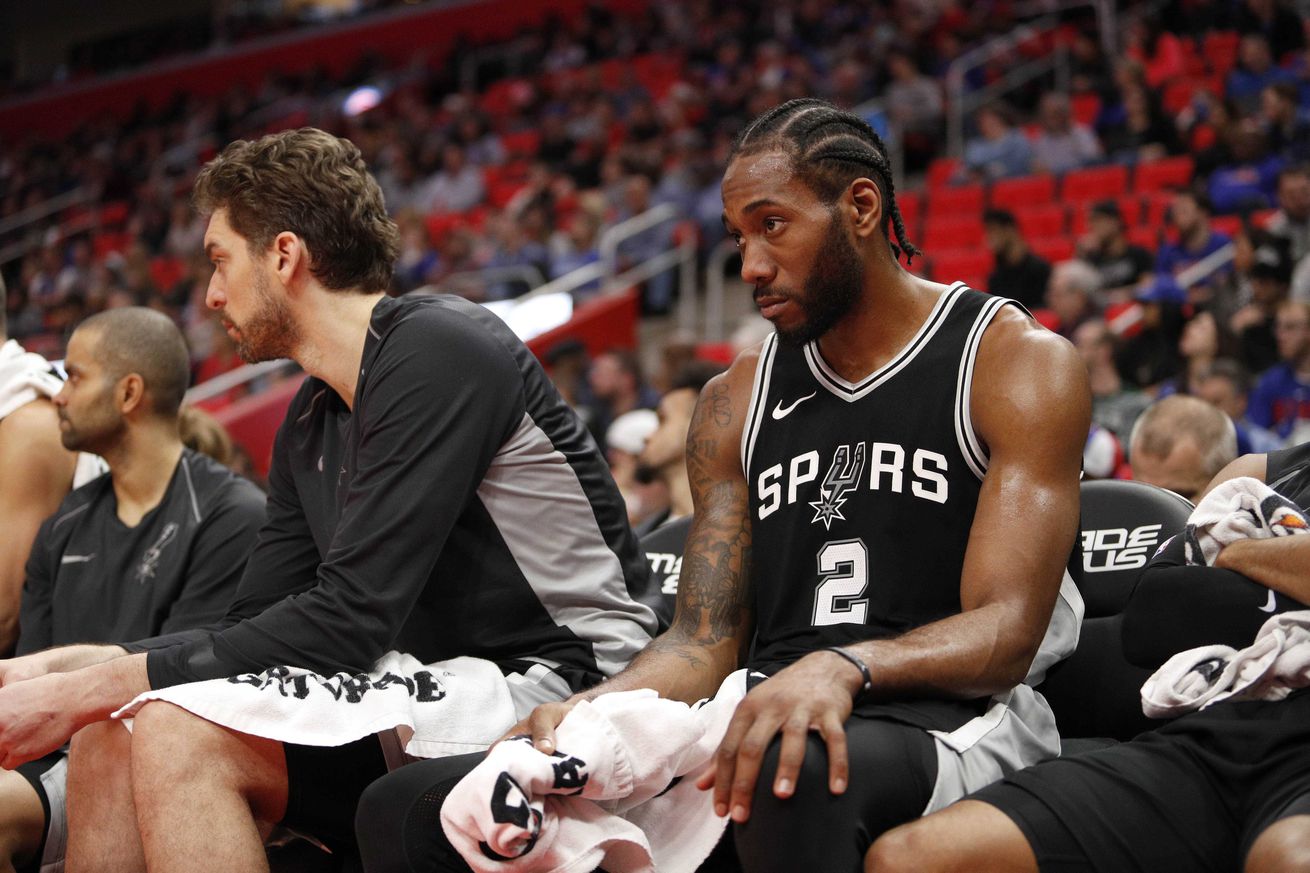 Some damning new information came to light yesterday about the Kawhi Leonard situation via Michael C. Wright’s appearance on Tom Haberstroh’s podcast, with Wright shedding some light on the situation that the Spurs find themselves in. After listening to the podcast in it’s entirety, here are some of the key takeaways:

Kawhi’s Group believes the Spurs are too controlling

Wright explains that a big reason for the gap between Leonard and the team is because of the perception held by Kawhi’s group that the Spurs are too controlling. However, it seems that Kawhi’s Uncle Dennis may not be the best person to evaluate how controlling someone is. Wright told a previously unshared anecdote about All Star Weekend in New Orleans in January to illustrate that point:

Let me tell you a quick story. At the All Star game in New Orleans a few years ago. Kawhi and his people are at the hotel, which is 3 blocks away from the arena. So the Spurs are like, the security people are like, ‘We need to get you out at this time for us to be able to make it to the game on time, because it’s gonna take 3 hours to get 3 blocks, basically.’ Kawhi’s people, namely Uncle Dennis, said, ‘No, we’re not doing that because the Spurs are trying to control this situation, this is what we’re going to do,’ So they decide to leave when Uncle Dennis decides to go and they get stuck in traffic!….You know what ended up happening? These guys ended up paying the hotel to hold the car and they walked, through Mardi Gras crowds, to the arena. They had Kawhi put his hood up and they walked through those crowds to the arena.

Wright makes the argument that, although Dennis sees the Spurs as a dictatorial entity, he has no frame of reference when it comes to how the 29 other teams in the NBA do business. On the subject of the injury that kept Kawhi out all season and the effect Dennis had on the situation, Wright says he made it worse:

“The major component of all this is Uncle Dennis cause he sort of fans the flames. Even the Spurs will tell you behind the scenes, ‘hey did we get this right? Well we don’t know,’ because they never got a chance to go through their rehab process long enough to know whether what they were doing worked. A lot of people don’t know this, but the Spurs gave Kawhi and his camp control of his injury situation, they let them take over on August 8th of last year. People do not realize that.”

Which brings us to the injury itself and the rehabilitation process.

According to Wright, the Spurs handed over control of Kawhi’s injury to his group back in August of last season when Leonard complained of pain from the rehabilitation exercises that the Spurs were putting him through to treat his quad. While it was reported at various points throughout the season that Spurs’ doctors were with Kawhi in New York during his rehab process, it appears that they had no input whatsoever on the treatment that Kawhi’s doctors were putting him through, which is when we can slot the story of Kawhi’s people moving him to a different part of the building when Spurs’ brass arrived.

The reason that Gregg Popovich did not have any answers for reporters and fans throughout the season is because the process was entirely out of their hands, while also being left in the dark about it, and there is still some questions about Leonard’s health as of this writing:

“Think about this, you go through the entire season, and Pop was asked these questions over and over and over again and I don’t think people realize this: Pop didn’t have any answers because the whole rehab process was out of his hands, he didn’t know anything. So when he’s saying, ‘You’ll have to ask his group,’ it’s not that he’s taking shots at Kawhi and his people its that he doesn’t know.”

Notes on the Laker trade talks

The last few weeks have brought a new phrase into the equation when discussing a potential Spurs-Lakers trade for Leonard: Godfather offer.The Spurs want a king’s ransom back in return for their superstar, and Wright detailed what he heard they were looking for from Magic Johnson, while also acknowledging that it is unlikely the Spurs get back what they desire:

“From what I heard the Spurs wanted Brandon Ingram, Kuzma, Hart and 3 picks. But i talked to someone else and they were like, ‘No I heard 4 picks,’…Teams are not going to do that deal, and as the summer progresses I think teams are going to be less likely to do that type of deal and the Spurs are going to have to reel back what their demands are at this point.”

The Spurs are still unsure of what to do with Leonard

Going forward, it appears that there is uncertainty with what will happen with Leonard and the franchise, even among higher ups in the organization:

Wright points out that there is a certain 221 million dollar super max extension that could clear all this up, at least for the moment, but after the year the Spurs just had dealing with this situation, they are fully aware of the risks that would come with handing over 30% throughout the next 5 years of their cap to Leonard:

“My guy told me, ‘Hey i bet if we put that big check in his face, everything will work out.’ And my response to that was, “Ok that’s cool, it’ll be all kumbaya for a couple months, but what happens if Uncle Dennis or Kawhi decides they wanna pull this same stuff from his past season?”

This would appear to confirm that the Spurs have yet to even offer the super max extension, acknowledging that it is a massive gamble to give up that much money and cap space on a player and his group that seemingly has become unpredictable and unhinged.

In the end, Wright believes the Spurs are at a point where they will do what is best for them, not for Kawhi. Much like this entire drama has been all year though, do not expect a timetable to lay it all out for us.

You can listen to the entire podcast here.