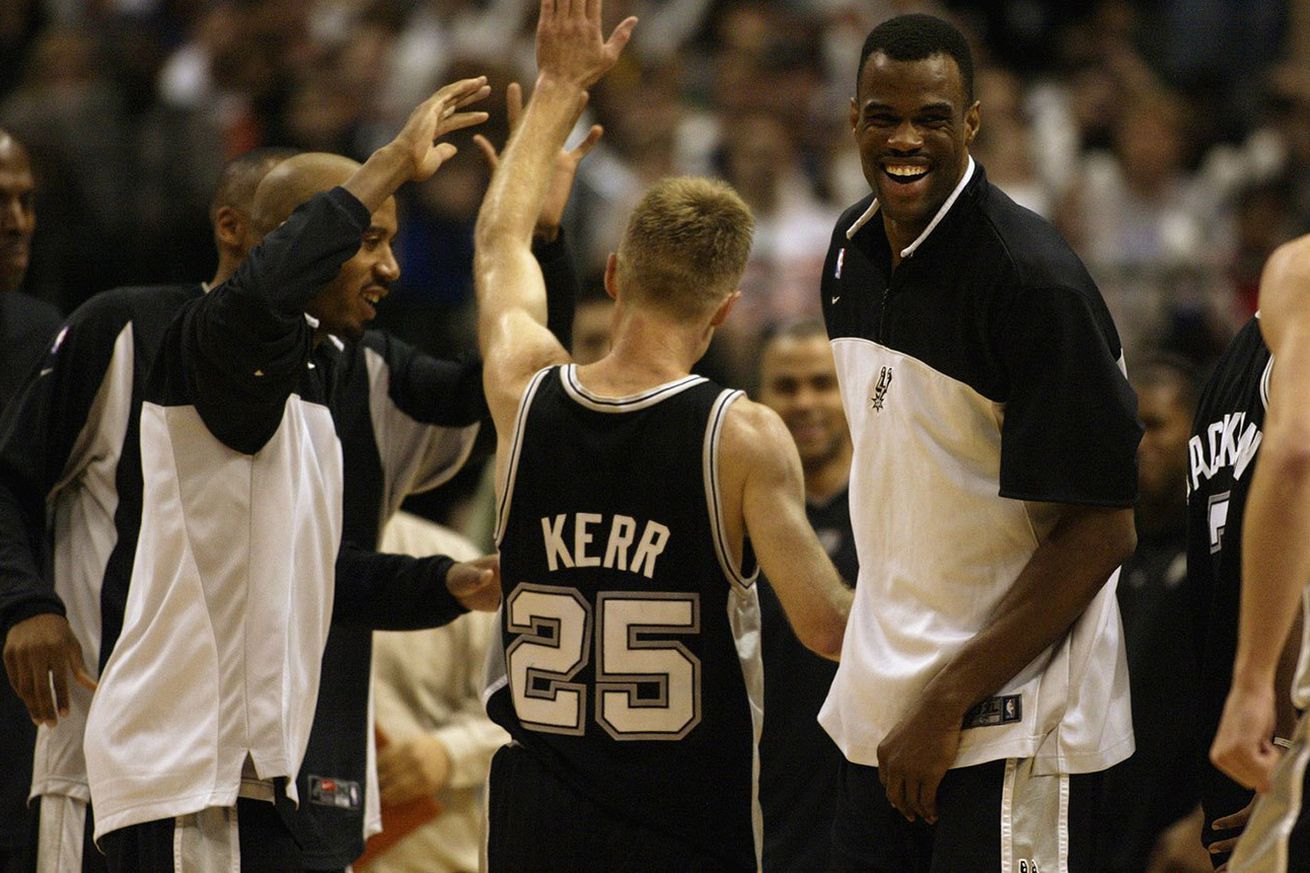 The quest for the Spurs’ greatest playoff play continues with Bracket 3.

Welcome back to the first round of our quest to determine the Spurs greatest postseason play of the Gregg Popovich era. Today we are looking at Bracket 3, and in true NCAA Tournament format, each play has been seeded one through eight, going head-to-head with its opposite seed (1 vs. 8, 2 vs. 7, etc.), and the winners will advance to the Sweet 16 next week. Be sure to vote for a winner of each match-up, and remember everyone can only vote once, so make yours count.

Today’s top seed is another huge shot that needs no introduction. It was not only game-saving, but likely saved the series and 2005 championship as well thanks to an overall big 4th quarter/OT performance from Big Shot Rob himself . . .

. . . going up against another big shot from Tony Parker in the Spurs’ biggest playoff upset of the Pop era: a revenge-fueled first round win as the 7th seed over a prime Dirk Nowitzki and the 2nd seeded Mavericks, who were still in search of their first championship and trying to shake the “choker” moniker they had gained in recent years (particularly 2007 after becoming the first top seed to lose to the 8th seed in the 7-game format).

The 2nd seed is another play everyone knows well and once again comes from their most exciting playoff win since their last championship. It’s also right up there with yesterday’s 2nd seed as one of the top defensive plays in this tournament . . .

. . . and this time Manu’s going up against himself with a fake-out that put one of the best players on the planet on skates. You might say he got Manu-ed.

Up next is another one of those super deflating plays for the Heatles in the 2014 Finals. The Spurs were putting on a clinic in Game 4, and even when they did miss Kawhi Leonard comes in with this high-flying, nasty putback. There would be nothing close to a legit comeback attempt by the Heat in this game. . .

. . . and it’s going up against the one entry in this tournament that doesn’t feature any particular player, but rather was an entire team effort and a hint of things to come as the “Beautiful Game” Spurs were just starting to come together.

Finally, today’s 4th seed is another big series of plays, this time four huge three-pointers from nearly retired Steve Kerr against the rival Mavs. With Parker battling food poisoning and Speedy Claxton ineffective, Pop turned to Kerr to to help guide his team back and prevent a Game 7, and he got more than he bargained for . . .

. . . versus a series of plays that wasn’t necessarily the run that won the 2014 championship for the Spurs, but it was at least the one that sealed it, beginning with a little personal revenge from Tiago Splitter on Dwyane Wade.

Come back tomorrow to vote on Bracket 4, and remember all polls for Round 1 will close on Sunday, Aug. 25 at 6:00 PM CT. If you haven’t already, be sure to vote for Bracket 1 and Bracket 2 as well.