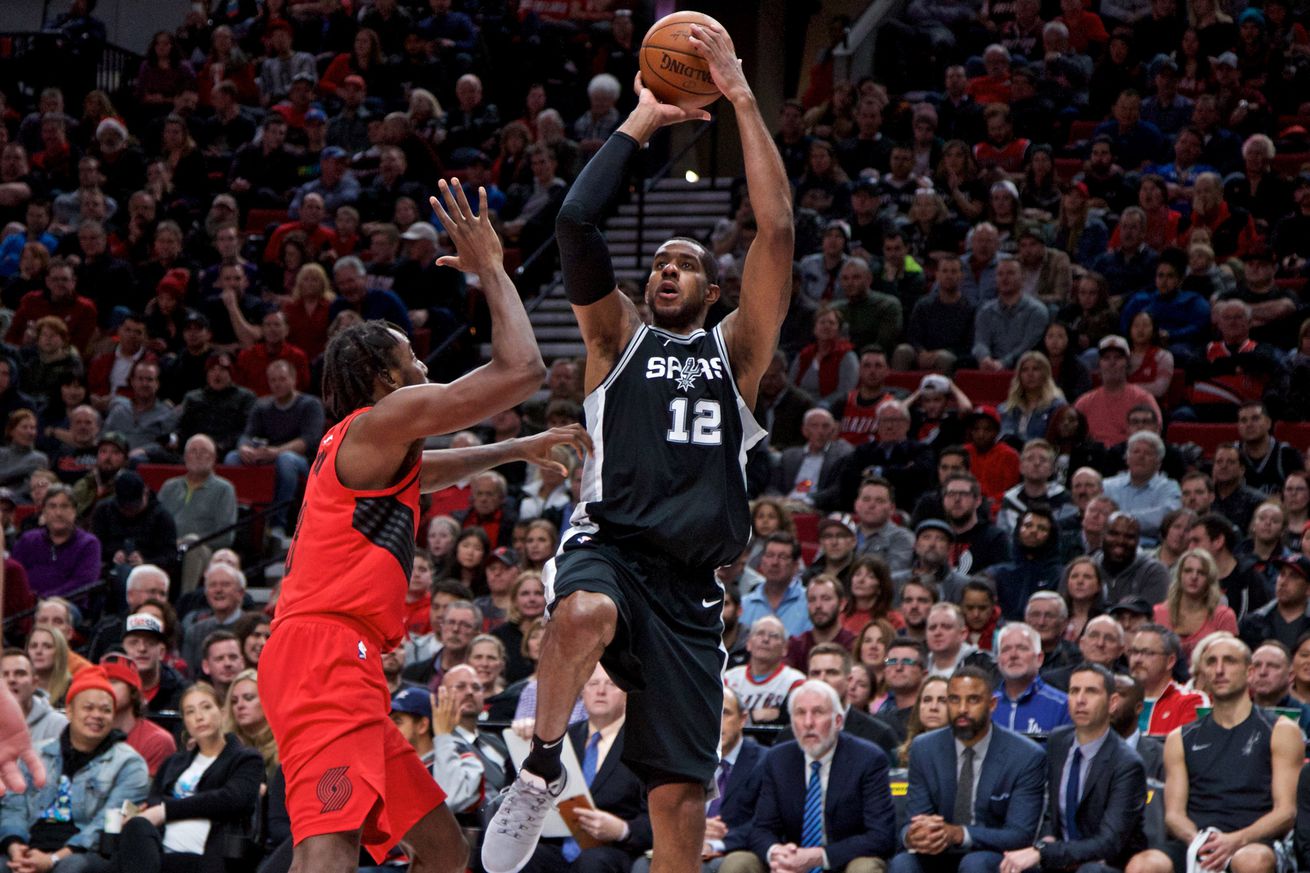 After another Spurs nail-biting victory, the question remains: is this team on the verge of being truly elite? A sloppy victory that saw the Spurs overcome 22 turnovers and free throw and offensive rebounding deficits would suggest the answer is yes.

When the Spurs have both bigs rolling, there just aren’t many teams that can beat them. Pau Gasol and LaMarcus Aldridge have high-low chemistry, they have shooting range, they have old school hook shots, and they are almost surgical in their execution.

In Wednesday’s game in Portland, Aldridge made several difficult shots while Gasol showed his versatility, even as he gets closer to age 40. It isn’t an offense that can be relied upon no matter what, but both big men have proven themselves to be reliable offensive cornerstones.

Opponents are going to watch the way Al-Farouq Aminu defended Aldridge in the second half and will attempt to replicate it. Aminu used his quickness to make any entry pass into the post a nightmare, and teams defending Aldridge with smaller players will be smart to take this approach.

The bad news is this strategy was quite effective. While Aldridge and Aminu battled down low, the shot clock ticked away, which often resulted in a Spur on the perimeter forcing up a difficult, low-percentage shot. It nearly became the biggest storyline of the game, had the Blazers pulled out the victory.

The good news is the Spurs eventually ran Aldridge through some early action before posting him up, which resulted in better positioning and just enough buckets to get a w. It also forced the passer to be decisive in either the entry pass, ball reversal, or dribble penetration, which tends to be an achilles heel for the Spurs when the first option is taken away.

The Spurs often pass up good shots in search of great ones, which can unfortunately result in guys overextending their playmaking capabilities. Things get sloppy out there, and turnovers tend to pile up when this happens.

The encouraging part of trading good shots for great is the results come April and May, not December. A healthy roster with reps will be tighter, faster, and more precise in every action. The good shots will truly become great ones, and every time the team moves the ball in search of a better option, someone on the floor gets another rep.

Defensively, the Spurs handled Damian Lillard and C.J. McCollum about as well as a team can. Of course, both players had great looks that didn’t go down, but that’s in part due to the fact that neither player ever got into a nice rhythm throughout the game.

The Spurs’ length on the perimeter meant switching was just a bit easier, which should prove to be critical in a playoff matchup against Golden State or Houston. Bryn Forbes, Dejounte Murray and Kyle Anderson all saw extended time on both Lillard and McCollum, and all three fared well.

Despite what everything this season has taught viewers, the Spurs were roughed up on the glass and still prevailed. Dominating on the offensive glass was a huge ingredient in the team’s early success, but Wednesday night’s victory was the rare game in which the Spurs were unsuccessful in limiting turnovers and gave up several offensive boards, but still managed to win.

The Blazers have been a good team this year and are typically very difficult to beat in Portland. This is not the prettiest win of the season, but it’s an important one. The very best teams in the league have a much larger margin for error than other squads, and Wednesday night felt like a potential case to include the Spurs in the elite group of basketball teams.

In Kyle Anderson’s first game back from his sprained MCL, Anderson did much of what he’s done all season: stabilize the offense, shrink an opponent’s space on defense with his length, and grab timely offensive rebounds.

The space that Anderson really shines in is between the free throw line and the baseline. He cuts well off the ball, he finds open teammates in tight spaces, and his long arms allow him to reach loose balls that other players will not get to. He enhances what the Spurs do well on both sides of the ball, and he is going to continue to make a big impact once everyone is healthy.

In Danny Green’s return from an injured groin, he served as a nice safety valve on offense and an anchor on defense. Reliable as ever, Green shut down a Lillard fast break by swiping the ball out his hands, picked off a pass late in the fourth quarter for an easy dunk, and knocked down a pivotal triple after off an Aldridge assist.

As the team nears full health, a larger picture can be seen: a deep roster of unique athletes ready to fill in the gaps around Aldridge and Kawhi Leonard. Multiple players can break a defense down off the dribble after a few rotations, multiple players can knock down great looks from 3, and many players offer an intriguing combination of size, length, foot speed, and basketball IQ on both ends of the floor.

The final product may not be seen until March or April, but signs of a team making a leap are visible. The Spurs probably should not have won this game, but when a team is this talented, things eventually just sort of fall into place.

-When LaMarcus Aldridge has it going, his shot degree of difficulty skyrockets, but that isn’t a bad thing necessarily.

-Aminu’s ability to make the entry pass difficult on the Spurs id not unlike what the Warriors will do to Aldridge. When a team defends like this, the Spurs will have a great opportunity to practice counters.

–Joffrey Lauvergne gave some really nice minutes off the bench in the third quarter.

-around the 3:20 mark in the second quarter, Davis Bertans got switched onto C.J. McCollum on the perimeter with the shot clock winding down and played fantastic defense. His versatility is still not fully realized.