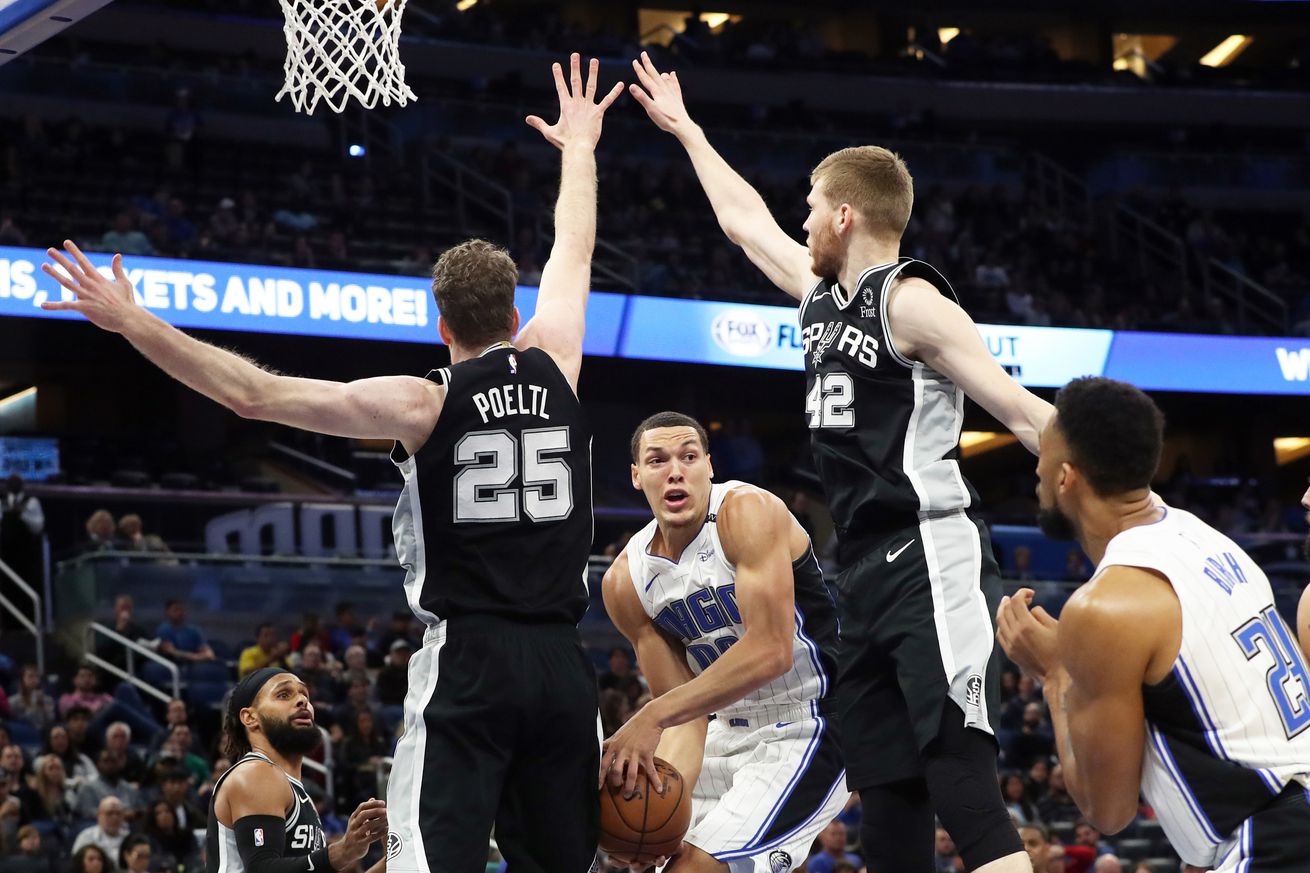 There’s still work to do, but the Spurs defense is looking better.

The Spurs’ defensive renaissance continued on the road Wednesday night against the Magic. Coming on the heels of a 5-1 homestand during which the good guys gave up just 100.7 points per 100 possessions, it served as partial corroboration of the team’s newfound defensive identity.

With timely help, intelligent switching, and a large dose of discipline, the team has found a recipe to offset individual player weaknesses on that end of the floor. Although it remains a work in progress, the 1st quarter against the Magic exemplified both the progress they’ve made and the work they’ve yet to do.

First, the good. With just over 6 minutes to go and the Spurs’ having extended their lead to 6 on a Bryn Forbes’ three pointer, they forced Orlando into a shot clock violation.

D.J. Augustin has the ball at the top of the floor while Evan Fournier runs under screens from Mo Bamba and Aaron Gordon on the baseline. Rudy Gay recognizes the action and calls for DeMar DeRozan to switch onto Fournier and Derrick White to stick on Gordon. With their initial action thwarted, the Magic transition into a pick and roll with Fournier and Bamba on the left wing.

Since the Magic aren’t well spaced out, Bryn is able to help all the way over to the far side of the free throw line to stop Fournier’s drive off the screen. Augustin is still moving to his spot on the left wing, which is still occupied by Gordon. Fournier kicks the ball over to Augustin, but Bryn recovers in time to prevent a shot or drive. Gordon drags Derrick down into the post and the Magic try to take advantage of the mismatch.

Rudy doubles on the catch, leaving Jonathan Isaac the opportunity for a quick cut along the baseline towards the rim. Gordon hits him, but both Derrick and LaMarcus Aldridge are ready to contest, so Isaac is unforced to unload a wild pass out to Bamba in the far corner. With less than 5 seconds left on the shot clock and DeMar right in front of him, Bamba swings the ball up to the wing and Fournier passes over to Augustin back on the left side of the floor.

Augustin drives, but LaMarcus blocks his path to the rim so he drops it off to Isaac on the baseline, but it’s too late to get a shot off.

These types of possessions are great indicators of where the team’s defense is at. For all five players to make good decisions and execute correctly this deep into the clock is encouraging.

A little more evidence of the Spurs defensive improvement:

While this was the only shot clock violation, the Spurs forced the Magic into 5 other late-clock situations in the quarter.

In order, that’s 1. Fournier knocking down a difficult step back three, 2. DeMar bailing the Magic out with a needless reach (and then getting a light scolding from Rudy), 3. Fournier missing a contested, off-balance shot in the paint, 4. Gordon bricking an 18-footer (note the kick-out switch by LaMarcus), and 5. DeMar closing the momentary opening when Augustin dives to the basket followed by Derrick and LaMarcus swarming Fournier on his way to the basket, forcing a turnover.

That’s good work, even with Nikola Vucevic missing the game, but the defense wasn’t that solid on every possession. They also gave up 5 open threes in the quarter.

Regadless, 24 points in a quarter is a good number, and the Spurs did a lot right in the first 12 minutes of the game. But this is a good example of the difference between good defense and good luck. If one more of those open threes goes in, it’s a 27 point quarter, and all of a sudden for most observers, it’s not a good defensive performance any more. That’s the trouble with relying on makes and misses to determine the quality of an offense or defense in a small sample size.

The Spurs’ defense is on a good run. They have the 2nd best defensive rating in the league since the start of the homestand on December 7, and their overall defensive rating has dropped 3 points in that span, moving the team up from 29th to 22nd. They clearly still have some improvements to make but don’t have much time to make them.

18 of their next 20 games are against teams with winning records. The other two, including this Friday night, are against Minnesota, a team that crushed them by 39 points last time they met. If this defensive resurgence is for real, the entire league will know it in the next few weeks.